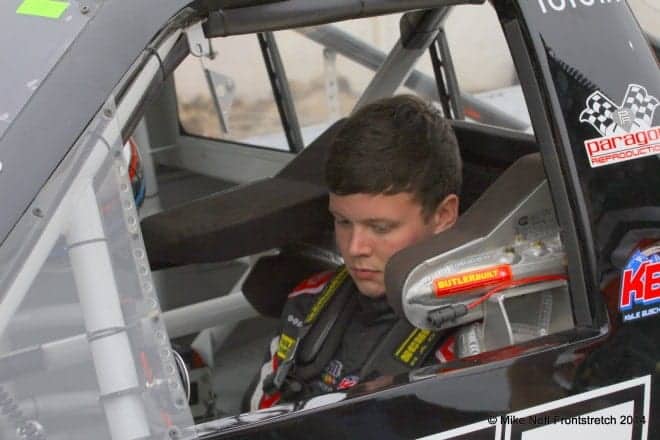 A move that had been widely speculated in the garage area for weeks finally became official on Thursday as Kyle Busch Motorsports and Joe Gibbs Racing  jointly announced that Erik Jones will run a full time Truck Series schedule for KBM and at least ten races in a part time XFINITY Series schedule for JGR in 2015.

“To have a chance to run full-time in the Camping World Truck Series in the first year that I’m eligible to do so is huge and there is no better opportunity in the series than to drive Toyota Tundras for Kyle Busch Motorsports,” said Jones. “Rudy and I have developed a great relationship the last few years and we’re going to have a quality team with a lot of familiar faces around us. I’m confident that I’ll be able to take what I’ve learned running a part-time schedule the last two seasons and be able to go out and challenge for wins week in and week out and be a contender for the championship next season.”

Jones has enjoyed much success the past two seasons running a part time truck schedule for KBM, scoring three wins, six top 5s, and 12 top 10s in 16 career starts. The native of Byron, Mi. picked up his first career Truck Series victory one year ago this weekend at Phoenix, at the time becoming the youngest driver to win a NASCAR national event. This season, Jones has added victories at Iowa and Las Vegas as well as a pole at Eldora Speedway.

Ryan Fugle will call the shots from the pit box for Jones in his rookie season.  Fugle led the KBM No.51 team to a series-leading six wins in 2013, including Jones’ historic win at Phoenix, and the owner’s championship. Fugle has added ten victories for the organization as an engineer in the 2012 and 2014 seasons.

“Erik is more than ready to take the next step in his career and compete for a championship running full-time in the Truck Series next year,” KBM owner Kyle Busch said. “Towards the end of this season, he had a stretch where he was behind the wheel for five of six races on all types of tracks and each week he went out, ran up front and showcased how talented he is at such a young age. Darrell (Wallace Jr.) was able to put us in the mix for our first driver’s championship this year and when you combine all the support we receive from Toyota with the people we have in place at KBM — from the crew chiefs, the pit crews, everyone at KBM Chassis and in the fab shop — I don’t see any reason why Erik won’t be able to do the same next season.”

In addition to his truck success this year, Jones made his Nationwide Series debut for JGR at Chicagoland Speedway in July, finishing seventh; he back up his debut with an eighth-place run at Bristol in August.
Announcements on truck number and sponsor for Jones’ Truck Series effort are forthcoming as well as  his crew chief, car number and sponsors for his part-time schedule in the XFINITY Series.