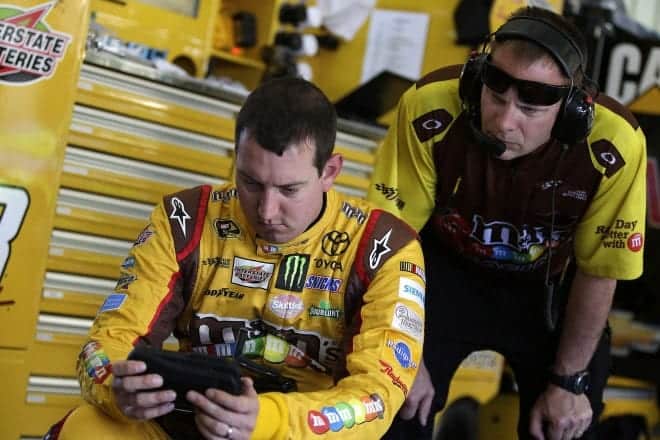 Could a major change in Crew Chiefs be happening with the No. 18 of Kyle Busch at Joe Gibbs Racing?

According to multiple sources inside the JGR camp, Kyle Busch and longtime crew chief Dave Rogers will part ways at the conclusion of the 2014 season, as reported by Godfather Motorsports.

The coming move has been kept silent, and as reported, was disclosed to the team at Joe Gibbs Racing last Tuesday. Not only will Rogers and the No. 18 team split, but the change will also send ripples though the JGR Nationwide Series program and Kyle Busch Motorsports’ Camping World Truck Series team as well.

Sources say that Adam Stevens, the successful crew chief of the No. 54 Toyota in the Nationwide Series (a team for which Busch often drivers), will be moved to the Sprint Cup side of the house and sit atop Busch’s No. 18 M&M’s Camry pit box in 2015.

Together, Stevens and Busch have won six Nationwide Series races this season.

Meanwhile, Eric Phillips, Camping World Truck Series crew chief of the No. 51 Toyota for Kyle Busch Motorsports, will move to JGR to replace Stevens in its Nationwide Series program. Phillips has helped KBM to win the series owners championship in 2013 and has led the No. 51 truck to eight victories this season with Busch and Erik Jones.

No word on when any changes to Gibbs’ organizations will be officially announced.