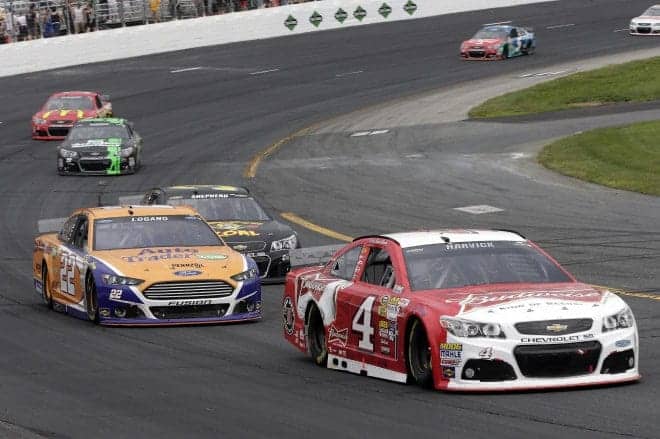 One race down, nine to go. The 2014 Chase kicked off with a bang last week, as Brad Keselowski, Kevin Harvick and Kyle Larson staged a three-way battle for the win that will be remembered for years to come. Few believed that Chicagoland Speedway could deliver a race as arresting as the one that took place last Sunday afternoon, and even fewer believe that New Hampshire Motor Speedway, the site of today’s race, has that capacity either. But if Chicagoland, a track many rank as the most maligned track on the circuit, can produce a thriller, New Hampshire surely can as well.

Right. On to the questions…

1. Will Brad Keselowski mail it in now that he’s locked into the next round of the Chase?

A quick look at the starting lineup for today’s race can probably answer this question. Here’s the deal: Brad Keselowski means business this weekend. After a week’s worth of speculation over whether or not he would have “anything to race for” after locking himself into the Contender Round of the Chase, Brad Keselowski silenced the skeptics by placing his car on pole for today’s race with a blistering track record speed.

The reality is that these drivers simply love to race, and even more so than that, they love to win. All the motivation the drivers in the Sprint Cup Series need to race hard is a trophy, so frankly this is one of those concerns that is overblown. Keselowski’s record pace in qualifying largely proves that despite “not having to race hard” over the next two weeks, he is still going hard for wins, and will perhaps be more dangerous than ever Sunday knowing that he has nothing to lose by going for it all.

Another thing to keep in mind is that until Keselowski locks up a spot for the finale in Homestead, he still needs to race hard so that he has a points cushion to fall back on in the event that he doesn’t make the final four. Should Keselowski miss the final cut before Homestead, not racing hard these next two weeks could result in the #2 team taking a hit in the final points tally, and that is something I’m quite sure that organization wouldn’t want.

So, all told, these concerns are much ado about nothing.

2. Will today’s race be able to match the intensity of last week’s race at Chicagoland?

Every once in a while, track’s known for producing boring races will suddenly come to life and offer an exciting show that captures everyone’s attention. That is exactly the scenario that occurred last week at Chicagoland, as everyone essentially assumed the race would be a snoozefest based on the track’s inglorious history. But out of nowhere, Chicagoland ended up putting on one of the finest races of the 2014 season, with tons of passing throughout the race, and a finish that was one for the ages.

Officials at New Hampshire Motor Speedway are almost certainly hoping that a similar “awakening” of the on-track racing product will occur at NHMS today. The June race here at this facility was a rather un-exciting affair characterized by a whole lot of lifeless green flag laps that didn’t feature much passing.

Of course, the added urgency of the Chase, along with a better understanding of the 2014 rules package on behalf of the drivers and teams, could end up producing a much different show today than the one that was staged in June. With drivers putting everything on the line to clinch a spot in the next round, it is almost a certainty that this race will, at the very least, have a bigger sense of urgency than usual, which ultimately should lead to some better reading. But of course, much of this is conjecture, and I could be totally wrong.

Regardless, the on-track product will bear watching (obviously, right?), as back-to-back exciting races (at tracks known for producing snoozeworthy shows, no less) would go a long way in boosting the long-term appeal of the new Chase format for fans who are still on the fence about the format as a whole.

3. Will Kevin Harvick actually live up to his nickname?

For years, people in the NASCAR community have dubbed Stewart-Haas Racing’s Kevin Harvick as “the Closer” for his perceived ability to come out of nowhere and steal victories when everyone least expects it. It’s easy to go back to races like the 2007 Daytona 500 and 2011 Auto Club 400 and use them as evidence of Harvick’s “closing skills,” but as far as I can tell, Harvick is not nearly the closer everyone thinks he is.

Case in point: two weeks ago in Atlanta, Harvick had the dominant car for the duration of the race, but a late race pit miscue left Harvick in 2nd in the running order and chasing Kasey Kahne. Despite having nearly 20 laps to catch and pass Kahne, Harvick failed to seal the deal and ended up wrecked on a late race restart.

Then of course there was last week in Chicagoland, where Harvick once again had one of the best cars in the field…and choked the race away simply due to an inability to close.

This theme has been an all-too-familiar in Harvick’s season: he’ll have the best car in the field, and somehow either he or his pitcrew will find a way to choke the race away. Such mistakes can not be made in this iteration of the Chase, and with Harvick appearing to have a strong car yet again today, he really can’t afford to choke away another win.

With the stakes getting higher each and every week, it’ll be interesting to see if Harvick’s team can finally get a handle on their late-race closing skills today.. It could be the difference between a Final Four berth and a 5th-12th place finish in the final standings.

4. Can a non-Chaser steal a victory?

In fact, it could very well happen today. After years of toiling in mediocrity, Chip Ganassi Racing finally seems to have turned the corner. Both of the team’s cars had Top 5 speed in last week’s race in Chicagoland, and their rookie driver, Kyle Larson, very nearly won the race. Call me crazy, but looking at the starting lineup for today’s race, I could very well see a similar scenario playing out once again.

Ganassi’s drivers have had speed all weekend long and will start 2nd (Jamie McMurray) and 10th (Larson). Neither driver has anything to lose, and each proved last week that they have no qualms about mixing it up with the Chasers. Could an underdog win be in the cards for today? I think it is more than possible.