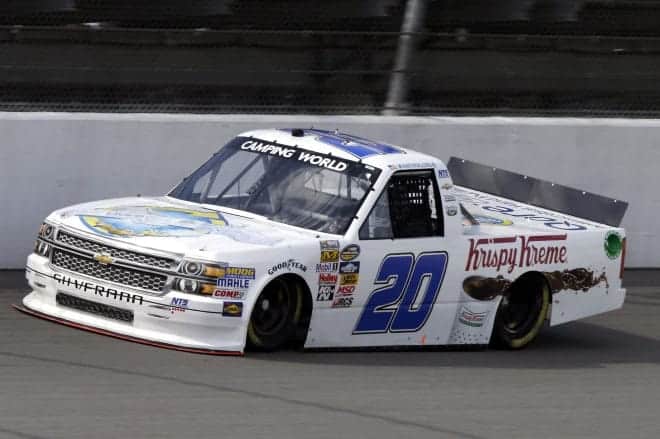 After Saturday night’s running of the Camping World Truck Series Lucas Oil 225 at Chicagoland Speedway, the No. 20 Rheem-sponsored Chevrolet driven by Austin Dillon failed the post-race height check.  A penalty was nearly certain to be announced and NASCAR came through on Wednesday.

Crew chief Chris Rice has been fined $7,500 for the height violation and has been suspended from NASCAR through September 24.  As a result, Rice will miss this weekend’s UNOH 175 at New Hampshire Motor Speedway.  NTS Motorsports’ No. 20 has been docked ten owner points as a result.

NASCAR determined that the No. 20’s height violation in the front end was considered to be a P2-level violation.  Normally in the Camping World Truck Series, a P2-level violation results in the crew chief earning either a fine of between $2,500-$6,000, a one race suspension, probation for six months or until the end of the year, or a ten point deduction in driver and owner points.  A combination of any of the listed penalties can also be put in play.

There are a couple of changes as compared to normal in play here.  First, Austin Dillon is ineligible to earn points in the Camping World Truck Series since he has declared for the Sprint Cup Series Championship.  As a result, no driver points were deducted.  Also, crew chief Chris Rice is already on probation due to a P3-level violation at Bristol.  Rice, then the crew chief of James Buescher’s No. 99 in the Nationwide Series, was fined $10,000 and placed on probation for ballast weight falling out of Buescher’s Toyota during the Drive to Stop Diabetes 300 on March 15.  As a result, NASCAR considers Rice to be a recidivist and escalators have come into play.  Under normal circumstances, escalators for post-race penalties don’t come into play unless the infraction is considered to be a P4-level penalty or greater.

In their press release, NASCAR indicated that the No. 20 violated multiple sections of the 2014 NASCAR Camping World Truck Series Rule Book.  Those sections are Sections 12-1 (Actions Detrimental to Stock Car Racing) and 20B-12.8 (Truck failed to meet post-race body height/ground clearance requirements of the 2014 NASCAR Rule Book)