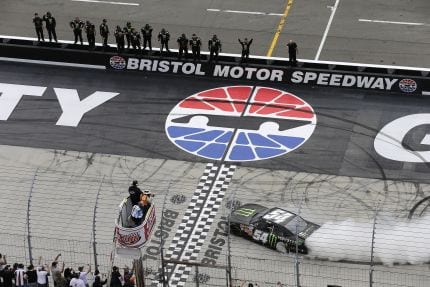 Bristol Motor Speedway has long been known as one of the most popular tracks among the fans in NASCAR due to fierce door to door battles and great fan experiences. It looks like race weekend in August will be no exception.

The speedway announced on Thursday they will be adding a new premium seating option along with longtime track partner Food City. In addition the track announced that they are expanding the Nationwide Series race an additional 50 laps to become the Food City 300.

“We have the best fans in all of motor sports, and each year it is our goal to make their time at Bristol Motor Speedway more memorable than the last,” said BMS Executive Vice President and General Manager Jerry Caldwell. “The Edge Deck, our newest way-to-watch, allows fans to be on the brink of the action, giving them a front-row seat of the cars coming off Turn 1.

“There’s also the newly expanded Food City 300, which gives fans 50 more laps of Bristol racing and enhances an already awesome day of knockout qualifying and nighttime Nationwide Series racing. Our friends at Food City appreciate Bristol’s loyal fans just as much as we do, and I’m thrilled they chose to express their gratitude by adding even more value to Friday’s ticket.”

The all new Edge Deck is a brand new addition for the August race weekend. It is a standing room only option available to fans that comes with a pre race track walk pass for the Irwin Tools Night Race and access to the Edge Deck’s full bar and food service amenities.

Tickets are currently on sale now at BristolTix.com.