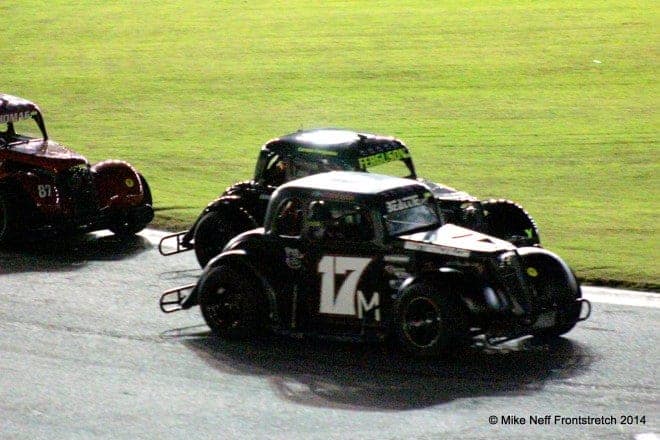 Ryan Millington is feeling out Legend car racing in the Summer Shootout at Charlotte. After a rough start on the first points night of the season he followed up with a fourth place finish on a damp night during round two. He is picking up the pace a little bit and was definitely looking racier in round two.

He talks with Frontstretch this week about running in the wet, racing or road courses and what it takes to be successful at Charlotte Motor Speedway during the Summer Shootout.

Mike Neff: What have you learned in your first three rounds of the Summer Shootout?

Ryan Millington: I’ve learned that you have to keep your cool, keep your car on the bottom and defend your spot at any price.

MN: Last week we had a little bit of rain out here, was that the first time you had ever run on a damp track?

RM: Yes, it was the first time I ever got to run on a wet track.

MN: Did you learn anything about running in the wet?

RM: No, not a whole bunch honestly.

MN: In the past, watching the Legends cars running in the wet, they tend to pull up a groove. Did you figure out if you could get more grip up higher?

RM: For the main event, the track started to dry off but there was a little bit more rubber on the track so I went up higher because the newer asphalt seemed to have more grip.

MN: The Cup guys are headed to Sonoma this weekend. Have you done any road racing in your young racing career?

MN: Did you have fun running on the road course or would you rather stick with ovals?

RM: I had a lot of fun. It was different than ovals but I thought I did pretty good for my first time on a road course.

MN: Any plans to travel to any other tracks this Summer with your Legends car?

Millington had a very good run in the Young Lions feature on Tuesday night. He led most of the race early before some wheel hop spun him out and sent him to the back. He rebounded and came home in sixth position. Millington was unhappy about spinning from the lead but he was very happy that he was able to rebound for the good finish.