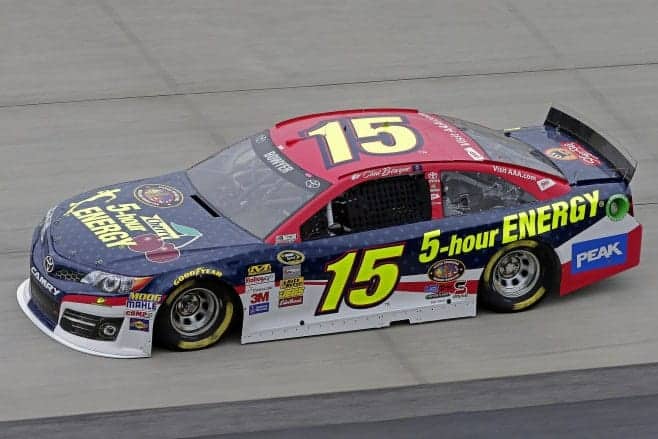 Toyota and Sonoma Raceway are continuing

Did You Notice?… Some clarity in NASCAR’s Silly Season picture? Clint Bowyer’s re-signing with Michael Waltrip Racing, despite a disappointing season came paired with a long-term extension for financial backer 5-Hour Energy. Now, it was unlikely Bowyer would move elsewhere, considering he was second in the championship standings with the No. 15 team just a year-and-a-half ago. But removing his name from the mix this early lessens the driver pool for other teams considering a move.

Now, the focus shifts to Greg Biffle andCarl Edwards, with Biffle hurt by NASCARbeing a game of inches. Leading 58 laps at Talladega, his No. 16 Ford appeared poised to make a run on Denny Hamlin midway through the white-flag lap. But a bumper in the middle of the track, dead center, forced NASCAR’s hand, causing a caution that left Biffle second and potentially on the outside of the Chase looking in. That victory, driving a car that’s been not competitive enough everywhere else, would be a good bargaining chip on the contract table with Roush seeking alternatives for 2015. Instead, it’s Denny Hamlin who gets the safety of a Chase bid, perhaps removing himself off the “hot seat” for now, although he hasn’t finished better than sixth outside of the Daytona-Talladega restrictor plate tracks all season.

Should Hamlin struggle, the No. 11 could be in play, and Joe Gibbs Racing would again hotly pursue Edwards, a driver they nearly signed back in 2011. Otherwise, the options for Ford’s former No. 1 are fairly limited: Hendrick Motorsports and Penske Racing, the only upshots from Roush, are either filled with long-term deals or prospects expected to jump into any future expansion.

If Edwards or Biffle moves, expect some dominoes to fall. Otherwise? We may be looking at a year of many drivers remaining in place, especially when so many changes (including eight rookies) dotted the landscape last offseason. Talladega, of all places, may be the race we look at three months from now as the reason why the sport enjoys such 2015 stability.

Did You Notice?… Some comments Dale Earnhardt, Jr. made at the end of the race at Talladega? Sitting 26th, after leading 26 laps during the race, he made it clear the risk wasn’t worth a potential reward down the stretch.

“You know they’re going to crash and I can’t afford to wreck anymore here,” he said. “So, you’ve just got to pick your battles.”

Earnhardt went on to explain that once he felt the car could only move up so much, why bother? What was unspoken is the driver already has his win, earning a Chase bid and so 15th versus 25th wasn’t going to mean much in the grand scheme of things. It’s a mode of thinking that’s the downside of NASCAR’s new format, one I expect to be more prevalent come July and August when you’ve got 12 or 13 drivers already “locked in” and settling for fifth, sixth, and seventh-place finishes while quietly biding their time until the postseason.

However, Junior’s comments struck a chord considering so many fans paid their hard-earned money to see him try and win. What does it say about Earnhardt that he was willing to give up the ghost rather than make a move? After all, his old man pulled the brilliant trick of jumping from 18th to 1st at this track back in 2000. More importantly, what does his attitude say about modern plate racing in this sport? If drivers feel like they “can’t afford” to wreck, why does NASCAR continue to promote a type of racing that one of its most popular personalities would fear to be unsafe? After all, having suffered multiple concussions there’s a thought process Junior wouldn’t want to put himself in position for another one.

Yes, you can take that to mean Junior appears to be running scared, judging an athletic competition to be more unsafe than it’s worth to try and win. How else can you interpret that comment when a driver says, “They can’t afford to wreck anymore?” That means the chance to wreck is so palpable, so dangerous, it’s affecting their judgment to go and do what they’re paid to do – race for the win under all circumstances. I wonder how many of the 50,000 Junior fans in the stands would have reacted differently if they were told beforehand their driver would tiptoe around the finish after getting shuffled straight to the back?

Did You Notice?… With Camping World’s recent extension, the series appears to be in better shape than its “minor league” counterpart? Ratings for Daytona were up 11 percent, the presenting sponsor’s CEO, Marcus Lemonis, is a big supporter and some of its marquis teams, like Thorsport, are manned by drivers and owners dedicated to sticking around for the long haul. That’s important, especially in a transition series where you’ll always have a set of drivers using it as a stepping stone to something better.

That type of stability, from teams that can not only fund themselves but win on a weekly basis, is what the Nationwide Series has been missing. All its top-tier programs, from JR Motorsports to Turner Scott to even Joe Gibbs Racing need both the influence and addition of Cup Series drivers to survive over the long-term. The “independent programs,” like TriStar are lucky to earn a top 15 by comparison if they play their cards right. How can you build and remain within a series when you’re not going to ever run better than 15th place?

The Truck Series knows better, in solid shape with programs like Red Horse Racing and Wauters Motorsports, whose roots remain deep – without eyes on Sprint Cup. Whomever the new Nationwide Series sponsor is, once the insurance company runs out at the beginning of 2015, has to work on establishing that type of “brand loyalty” and competitiveness. As it is, they’ll be dealing with two networks in FOX and NBCwho are basically covering the series as second banana prior to the Cup racing on Sunday. It’s a far cry from the FOX Sports 1 crew dedicated to the Truck Series full-time, a focus that certainly makes their broadcast one of the best racing productions in America year in and year out.

Did You Notice?… Quick hits before we take off…

– It’s clear the good racing this season is affecting at-track attendance. Talladega, despite cutting back its seat count, was packed for not just the Cup race but Nationwide Series activity this weekend. Clearly, the “hardcore” fan, willing to spend money to attend these events has had their interest piqued by NASCAR in 2014. So how does the sport market to television, whose ratings are sitting at 14-year lows? That’s the unanswered question as we head into the sport’s second quarter of the season. It is notable that of the eight winners in 2014, none of them are first-timers. Only Kyle Larson, amongst the many rookie candidates, has come close. Is it possible the sport just needs some new, compelling faces to go along with the racing itself? New fans may also need new reasons to watch.

– For Aric Almirola, this weekend could be an early test of how middle-tier teams handle the new Chase format. Almirola is in love with Kansas, leading 69 laps and nearly winning there in the fall of 2012 until some tire problems led to a crash. Last year, he was eighth and tenth in the No. 43 car and clearly has a special knack for getting around the 1.5-mile oval. So if I’m Richard Petty Motorsports, why not put all my eggs in one basket here? Spend some extra cash, a little R&D time and put a special strategy together to go for broke. It’s worth it to run 25th a few other places if a win can get you into the Chase, right? That’s what NASCAR wants with this new format, teams in this bracket taking chances and I’m interested to see if RPMwill bite.

– Is Jimmie Johnson in trouble? Going winless through ten races, along with some tension on the radio with crew chief Chad Knaus, has some saying the No. 48 is a sinking ship. But how many times has this movie played out before the Chase, only for the Lowe’s team to spank the field? Your key tracks, for this crew coming up are Charlotte and Dover, places where Johnson could potentially lap the field under the right circumstances. Should he fail to dominate at either place, then get back to me and tell me this team is a walking catastrophe. Using the regular season as a test session often comes with its own set of failures, don’t you think?

– Ten races into 2014, Tony Stewart sits 21st in points with just 74 laps led (all at one race, Texas) and three runs outside the top 30. Yes, for a driver who heats up in midsummer we’ve seen this movie before, too. But I feel differently here. With a new crew chief, at age 43 and coming off a serious injury it’s fair to question the recovery level for this driver/owner and if he’s going to need another year before returning to form.