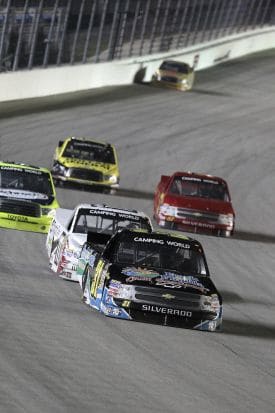 Hello, race fans. Welcome back to Couch Potato Tuesday, where critiquing of race broadcasts is the name of the game. The Sprint Cup Series took their final weekend off of the year, but unlike the last time, there was plenty of action to make up for it. Both the Nationwide and Camping World Truck Series were each in action at Chicagoland Speedway. The ARCA Racing Series also raced Saturday as the tertiary show.

*Before we start,* ESPN stuck a little nugget into their “press release”:http://espnmediazone.com/us/press-releases/2012/07/nascar-sprint-cup-racing-coming-to-espn-for-second-half-of-season/ about their upcoming Sprint Cup coverage. Tucked in there nice and tight is the news that Marty Reid will be returning to the broadcast booth to do play-by-play for the remaining Nationwide Series races. This will allow Allen Bestwick to focus on the Sprint Cup races.

It’s a similar tactic to what ESPN did in 2009 when Dr. Jerry Punch was still in the booth. Then, Reid was considered to be a breath of fresh air. Now, I’m not so sure. Also announced was a mini-marathon of past Brickyard 400’s that will air on ESPN Classic (if you still get it). I’ll put a list in the comments section below the article listing those.

SPEED brought us great coverage of the Camping World Truck Series from Chicagoland.

On Saturday night, the Camping World Truck Series returned to action at Chicagoland Speedway for their sole appearance of the year. SPEED was coming off a decent broadcast last week in Iowa. Could they keep it up?

The Setup started out with Ray Dunlap taking a field trip out to Todd Bodine’s house in recognition of Bodine becoming the first driver to make 200 starts in all three of NASCAR’s “National” series. Bodine busted out a bunch of his trophies and discussed some of them, including his trophy from winning his first Busch race at Dover in 1991 and the three-wide win at Rockingham in 1995 (Note: That was done in the No. 72 for Parker Racing the first time out after Tracy Leslie was dropped). This was an interesting piece I enjoyed.

Another piece had SPEED following Matt Crafton on an excursion to Route 66 Raceway, where he made his TORC debut (Note: Route 66 Raceway is basically next door to Chicagoland Speedway). Crafton was driving for Travis Pastrana, so it is not exactly a surprise that Pastrana showed up in the piece. As it turns out, Crafton did very well until he rolled his truck.

Finally, a third piece had Parker Kligerman going to a local ACE Hardware to try to purchase a replacement part for BKR’s grill, which apparently broke. In reality, this was a sponsored piece for PlanetDIY.com, Kligerman’s sponsor for the evening.

SPEED’s race coverage was once again very enthralling. There was plenty of action out on the track and they managed to bring most of it to viewers. However, there were a couple of things that piqued my interest.

James Buescher came back to win after supposedly being two laps down. I know that he got one of those laps back via the Lucky Dog. I’m unclear about the second lap. I don’t remember it being mentioned that Buescher took a wave around, although I suppose it could have been possible.

Also, after Buescher got back onto the lead lap via the aforementioned Lucky Dog, there was almost no mention of his rush back up through the field. Mind you, he got the “Dog” on Lap 107 and the race restarted at the beginning of Lap 112. He came up through the field like heck, and didn’t really get a mention until there were roughly ten laps to go. They needed to do a better job of updating Buescher’s progress.

Finally, when Justin Lofton’s crash brought out the last yellow of the race, SPEED only caught the second wall contact (in Turn 3) and the debris coming off of Lofton’s truck. He had already hit the wall before that. I have no clue what happened to cause those shenanigans, and perhaps the commentators were in the same boat as me. Not too good.

Post-race coverage was fairly brief by SPEED standards. There were five post-race driver interviews, along with an interview with winning crew chief Michael Shelton. SPEED cut away from Shelton during his interview to show Buescher’s burnout (in both sides of a split-screen), which was quite weird. There was also a check of the point standings before leaving the air.

Despite my gripes listed above, I did enjoying watching this race. It was an epic duel and it was great to watch. The commentators were generally excellent. Nothing ridiculous happened, thankfully. I really do wish that SPEED re-integrated some pre-race interviews into the Setup. Maybe that will happen in future editions.

The Nationwide Series had a rare Sunday afternoon affair under sunny skies in Joliet, Illinois. ESPN brought what was tantamount to their best squad to the track (minus Jamie Little, whose maternity leave continues) to cover the action.

There was also another scheduled one hour edition of NASCAR Countdown. Ultimately, this started even earlier due to the Open Championship coverage ending just a little early.

Countdown contained the typical amount of pre-race analysis, but with a healthy amount of pre-race interviews as well (a minimum of nine). I feel like SPEED needs to find some kind of happy medium between features and interviews for the Setup. As of now, they’re tilting heavily towards features. ESPN actually seems to be doing this well, despite the amount of time spent in the Pit Studio.

ESPN replayed the Kyle Busch piece with Kyle Felver that premiered last Tuesday as part of SportsCenter’s My Wish series. Busch took Felver on a tour of his race team’s (Kyle Busch Motorsports) shop, played with RC cars (Traxxas trucks, naturally), and brought him along to Charlotte Motor Speedway for the Coca-Cola 600. Fun was had, and a different side of Busch was seen. Admittedly, when I saw it as part of Countdown it was something like the seventh time. That’s right, I’m the guy that falls asleep to SportsCenter at night.

Another piece had a few drivers (Elliott Sadler, Austin Dillon, Justin Allgaier and Cole Whitt) talking about what it will be like to race at the Indianapolis Motor Speedway. Obviously, this was meant as a way to advertise the inaugural Indiana 250, which is this Saturday.

Overall, ESPN’s race coverage was lukewarm. There were no obvious technical issues that stood out. Since the race spread out as much as it did, especially early on, ESPN had to step a little out of their top-5, Danica Patrick and Travis Pastrana comfort zone and showed a little racing further back in the pack. That’s always good to see.

Speaking of Pastrana, ESPN basically chose to leave him alone in Joliet, which I found interesting. No in-car cameras, no interviews, no pre-race feature where they stalked him in Loudon, no nothing. I don’t remember him being mentioned until Lap 152 in a Race Rundown. However, Pastrana had a decent day on Sunday. He kept himself out of trouble and came home a lap down in 17th. This ties his previous best from Darlington. Granted, I still think that the car might have been better than that (remember, Kenny Wallace in the hastily put-together second car was fourth). Baby steps.

The one gripe I had with the coverage was when the first yellow came out for Jamie Dick’s issues. There was no real follow-up, no nothing. Most of the coverage was centered on Brendan Gaughan nerfing the commitment cone. Big deal. That didn’t bring out the yellow. Dick did continue eventually and finished nine laps down in 29th. This was never really acknowledged on the broadcast. There was literally no mention of what caused anything that happened to Dick, or a replay of what happened. All we saw was a stationary No. 23 and we heard some radio transmissions that made it sound like Dick was a little clueless as to what happened.

Post-race coverage was actually kinda brief since the race ran over its appointed timeslot. ESPN provided viewers with interviews with the top-4 finishers (Sadler, Ricky Stenhouse, Jr., Allgaier and Kenny Wallace), and an interview with the winning crew chief (Luke Lambert). The unofficial results were only seen in the scroll. No point standings were shown before ESPN left to get to SportsCenter. Kinda weak.

The telecast was OK, probably middle of the road or slightly better for Nationwide coverage so far this season. However, with the reintroduction of Reid into the booth for next Saturday, I believe that the dynamic will change.

That’s all for this week. Next weekend will see the Sprint Cup Series return from their Mid-Summer Break to begin the 17 race stretch run to Homestead. Also, we welcome ESPN back for the rest of the season. Take that however you want to take it. Also, we have the Nationwide Series making their first trip to the Indianapolis Motor Speedway. Sadly, most people don’t hold out a lot of hope for that event, which is a shame.

In addition, Friday is a day of road racing on IMS’ infield road course for Grand-Am’s two series, while the ARCA Racing Series competes in Clermont, ten miles away.

I will provide critiques of the Sprint Cup and Nationwide race telecasts from Indianapolis. The third race is a bit of a toss-up for now. It will either be the Brickyard Grand Prix for the Rolex Sports Car Series or the Messina Wildlife Animal Stopper 200 from Lucas Oil Raceway at Indianapolis. Free choice for you guys if you want to make a suggestion.

As always, if you choose to contact the network by email, do so in a courteous manner. Network representatives are far more likely to respond to emails that ask questions politely rather than emails full of rants and vitriol.