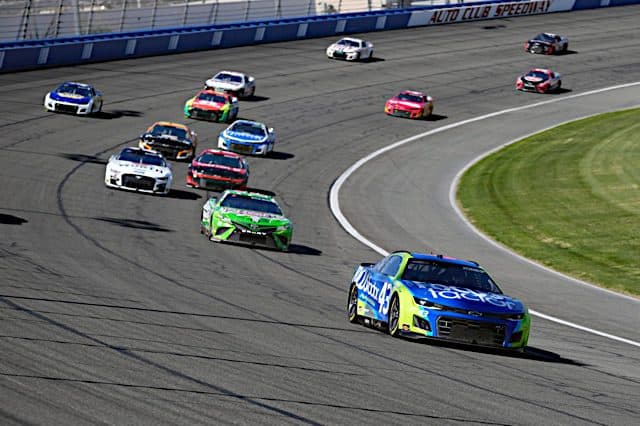 The month of February is all about the number two. It’s the second month of the year, Groundhog Day is celebrated on Feb. 2, plus this year marks the only time when we get the 2/22/22 date — and it happened on a Tuesday (Twosday?). And for NASCAR’s second week of racing at the 2-mile Auto Club Speedway, we saw two wild races with two standout home state winners. Pretty crazy, huh?

In the end, last weekend belonged to the California natives, as Cole Custer led 80 laps to win Saturday’s Production Alliance 300 for his 10th career Xfinity Series win, while Kyle Larson notched his 17th career Cup Series win in Sunday’s Wise Power 400. There were plenty of ebbs and flows that occurred in both races, and these are the latest unique numbers that have come out of this weekend’s action out west.

In the early going of Sunday’s race, Daniel Hemric found himself six laps down due to a faulty shifter inside the car. But thanks to the high number of yellow flags, pit strategy and wave-arounds, Hemric found himself back on the lead lap by lap with over 30 laps to go. He eventually finished ninth, collecting his third career Cup Series top-10 finish in just his second start for Kaulig Racing. A noteworthy comeback by the reigning Xfinity Series champion.

Another winless car number was checked off the list on Saturday with Custer’s victory, who drove the No. 07 Ford Mustang for SS-Green Light Racing in alliance with Stewart-Haas Racing. It’s the first ever Xfinity Series win for the number in 309 starts. And the SS-Green Light team got to enjoy its first win in any NASCAR event since entering the sport back in 2000 in the Truck Series.

It seems like both the Xfinity and Cup races were struck with yellow fever, as the yellow flag flew 12 times in each race. Saturday’s race set a new Xfinity record for having the most cautions at Auto Club Speedway, including three overtime attempts. It beat the previous record of 10 cautions, which was set in the fall of 2009. And Sunday’s Cup race ended up tying the track record of 12 cautions, set in the spring of 2008.

That’s the number of different Cup Series drivers who have scored a top-10 finish in the first two races of 2022. Weirdly enough, this means almost every driver who scored a top-10 in the Daytona 500 failed to finish in the top 10 at Auto Club, and vice versa. This phenomenon hasn’t occurred since 1973. The only driver who has back-to-back top 10s out of this group of drivers? Aric Almirola (fifth at Daytona, sixth at Auto Club after enduring a mid-race spin).

Christopher Bell and William Byron couldn’t have had more frustrating starts to the new season. Both drivers were involved in crashes at Daytona and Auto Club, with Bell having one DNF compared to Byron’s two. Currently, Bell is ranked 36th in points with an average finish of 35th, while Byron has an average finish of 36th and is ranked 33rd in points. Fortunately, they both have fast cars on a regular basis, and it’s likely they’ll come back in strong fashion when the Cup Series races at Las Vegas on March 6.

Even though it was Larson who took home the checkered flag, it initially looked to be Tyler Reddick’s day in California. He won both stages and led a race-high 90 laps, the most he’s ever led in a single race. But on lap 153, he suffered a flat left-rear tire while in the lead and was struck by Byron off turn 2. Reddick continued on but limped home to a 24th-place finish. The 26-year-old driver still stands winless at 76 Cup starts.