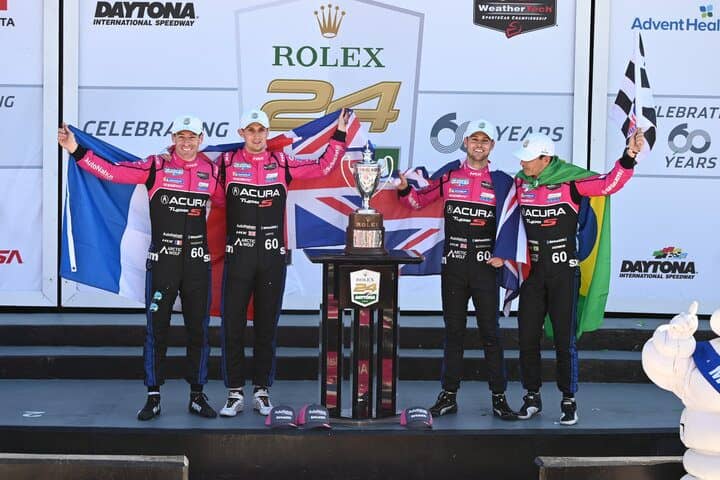 Wayne Taylor Racing’s Filipe Albuquerque started from the pole, but was shuffled back early on.  For the first few hours, the class of the field was Action Express Racing’s Ally Cadillac No. 48 and Chip Ganassi Racing’s No. 01 Cadillac.  Early on, Ganassi’s Sebastien Bourdais ran in the back of Action Express’ Kamui Kobayashi, something that can be traced back to Bourdais being unhappy with the driving style of Kobayashi.

The Cadillacs dominated early, but ran into trouble in the overnight hours.  The No. 48 Cadillac was very strong until Jimmie Johnson had contact with a GTD car and went off-course.  This contact broke the right rear suspension on the car and resulted in a 23-lap stay in the garage.

Later on, Bourdais took the No. 01 Chip Ganassi Racing Cadillac to the garage during the 12th caution of the race for what originally seemed like a routine brake change.  It ended up being much more than that as the team had to change the alternator belt, a painstaking process that took more than an hour to complete.

The No. 02 also had plenty of speed.  Kevin Magnussen was able to get himself into the overall lead after Bourdais took the No. 01 to the garage.  However, the car was suffering from fuel pickup issues that would result in the car cutting out on the banking.  That eventually forced the team to pull the car behind the wall in the 17th hour to replace the fuel pump.

With three Cadillacs removed from contention, that allowed the Acuras back into the discussion.  From the 17th hour on, the Acuras swapped the lead with JDC-Miller MotorSports’ Cadillac and Action Express Racing’s No. 31.

Blomqvist took the lead from Ricky Taylor with a little more than an hour and a half to go.  From there, Blomqvist pulled away from the pack before handing over to Castroneves during the final stop.  Castroneves was not threatened en route to the win, his second in three years.

The LMP2 class early on was dominated by PR1 Mathiasen Motorsports.  Keating (in his primary car) started from the pole and ran a steady pace with teammate Steven Thomas giving chase.

As time went on, the advantage moved around the class.  At one point, High Class Racing was the team to beat.  Then, Fabio Scherer got into turn 1 too hot, spun and backed into the tires.  While Scherer was able to drive the car back to the pits and get it repaired without going to the garage (causing a full course caution and likely ticking off the officials in the process), the car was never the same after that.  They would eventually retire.

Ultimately, the race came down to a battle between Tower Motorsport’s Louis Deletraz and DragonSpeed’s Colton Herta, who had been three laps down early on, but made up the ground via wavearounds.  Herta was leading prior to the final caution, which flew due to Andrew Wojteczko Autosport’s Matt Bell stalling at the Le Mans chicane.

During the stops under that caution, Deletraz was able to jump over Herta and get back in the lead.  This set up what was going to be a fierce battle over the final 30 minutes.  With 12 minutes to go, Herta caught Deletraz and made a move at the chicane.  This was the result of that move.

The ORECA 07 was not necessarily designed for agricultural racing, but Deletraz was able to make it through the grass without too much trouble.  However, that dropped Deletraz right out of the hunt.

From there, Herta was able to hold on to give himself, Devlin DeFrancesco, Eric Lux and Patricio O’Ward their first LMP2 victories.  It is also the third Rolex 24 LMP2 victory for DragonSpeed.

The LMP3 class was probably the least competitive of the five classes.  Andretti Autosport dominated the qualifying and started from the pole.  However, the main stars in the class were the quartet driving the No. 74 for Riley Motorsports, Michael Cooper, Felipe Fraga, Gar Robinson and Kay van Berlo.  The team led early and often, only giving up the lead due to split pit strategies.

The team took the lead for good late in the 11th hour.  From there, they were able to keep things steady and hold on to take the class victory.  Riley Motorsports’ margin of victory was a full lap over the Sean Creech Motorsports No. 33 shared by Joao Barbosa, Malthe Jakobsen, Sebastian Priaulx and Dr. Lance Willsey.  CORE autosport’s Jon Bennett, Colin Braun, Nic Jonsson and George Kurtz were third, followed by Andretti Autosport’s Jarett Andretti, Josh Burdon, Gabby Chaves and Rasmus Lindh.  AWA’s Bell, Orey Fidani, Lars Kern and Kuno Wittmer were fifth.

The last couple of hours of the race will likely be best remembered for the duel in GTD Pro between fellow Porsche factory drivers Mathieu Jaminet (for Pfaff Motorsports) and Laurens Vanthoor (for KCMG).  The two Porsche veterans battled hard for the lead, never more than a few car lengths apart.

For the vast majority of this time, Jaminet was in front of Vanthoor.  Vanthoor would press Jaminet and Jaminet would get very defensive.  There was a healthy dose of contact between the two that had the crowd on edge.  With a couple of laps to go, Vanthoor was able to just barely clear Jaminet entering the International Horseshoe to take the lead.  Jaminet immediately fought back.  With one minute remaining on the clock, Jaminet was able to get the lead back at the same place on the track.

Vanthoor was not done as he got a run going onto the backstretch on Jaminet.  The two drivers went side-by-side into the newly renamed Le Mans chicane when the major contact that seemed inevitable happened.

WHAT A FINISH IN THE GTD PRO CLASS!@Rolex24Hours x @Daytona x #Rolex24 pic.twitter.com/qKSlt9wDpY

As you can see from this clip, Jaminet went defensive going into the chicane while Vanthoor was on the outside.  Jaminet then tried to take his normal line.  This ran Vanthoor off the road.  More contact was made that ultimately resulted in Vanthoor spinning out.  From here, Jaminet was home free to take the class victory for himself, Felipe Nasr and Matt Campbell.

Pfaff Motorsports’ margin of victory was 2.185 seconds over the Ferrari of Risi Competizione’s James Calado, Alessandro Pier Guidi, Davide Rigon and Daniel Serra.  Vanthoor, along with teammates Alexandre Imperatori, Dennis Olsen and Patrick Pilet, were forced to settle for third.  Vasser Sullivan’s Ben Barnicoat, Jack Hawksworth and Kyle Kirkwood were fourth in their Lexus, while WeatherTech Racing’s No. 15 Mercedes of Patrick Assenheimer, Austin Cindric and Dirk Mueller were two laps down in fifth.

In GTD, attrition played a major role in the class as eight of the 22 cars that started failed to finish.  One of those teams was Crucial Motorsports, who led all of the GT3 cars early on before dropping out in the 12th hour.

Another was SunEnergy1 Racing, which led early on before team owner/driver Kenny Habul collided with the GTD Pro No. 23 for The Heart of Racing driven by Alex Riberas and went into the SAFER Barrier.

A third was HTP Winward Motorsport, which was looking to defend their class victory from last year.  The No. 57 Mercedes was in the top five in class before trouble struck in the 19th hour.  They still managed to finish sixth in class, but they were eight laps down at the finish.

Ultimately, the two best cars in the last six hours of the race were Wright Motorsports’ 1st Phorm-sponsored Porsche and Inception Racing’s McLaren 720S GT3, in the team’s second-ever start in the series.  Unfortunately for Inception Racing, an elongated brake pad change with four hours remaining took them out of the hunt.

Wright Motorsports’ Jan Heylen, Ryan Hardwick, Richard Lietz and Zacharie Robichon had the fastest car at the end of the race.  With the rest of their opposition falling away due to issues or lack of pace, Heylen was able to take an impressive class win in 24th overall.

Wright Motorsports’ margin of victory was 12.542 seconds over Magnus Racing’s Jonny Adam, Andy Lally, John Potter and Spencer Pumpelly.  In their debut in the Aston Martin Vantage GT3, Magnus Racing came back from a lap down multiple times to finish where they did.

18 of the 61 teams that started the race Saturday failed to finish, a higher than normal attrition rate.  The race also had 17 cautions that took up over 90 laps.  Despite the yellows, the leaders still covered 761 laps, the sixth highest in the history of the race.

After the Rolex 24 weekend, teams are going to take a few weeks away from the track.  The next race on the schedule is the Mobil 1 12 Hours of Sebring, the second round of both the IMSA WeatherTech SportsCar Championship and the Michelin Endurance Cup.  That race is scheduled to start at 10:30 a.m. ET on Saturday, March 19.  Coverage will be split between USA and Peacock.