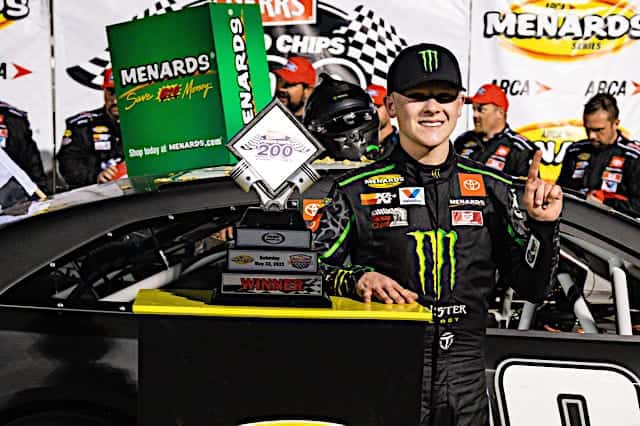 Make it three straight wins for Ty Gibbs under the ARCA Menards Series banner. After winning at Kansas Speedway, Gibbs led every lap en route to victory in the ARCA Menards Series East race at Dover International Speedway. On Saturday night (May 22), Gibbs dominated the Herr’s Potato Chips 200 at Toledo Speedway to score his third win of this season and 11th of his career.

It is Gibbs’ second career win at the half-mile short track in Toledo, Ohio. He previously won an East series race there last year.

“Gibbs was not to be denied!” MAVTV reporter Dave Rieff remarked in victory lane as Gibbs emerged victoriously from his No. 18 Joe Gibbs Racing Toyota. Indeed, Gibbs was second-quickest in the practice session, won the pole, and led the most laps in this race.

“We had a really good night,” Gibbs told MAVTV. “We had a couple of issues there at the end. Got moved but it’s hard racing there. I really enjoy racing myself. I work really hard at it.”

Corey Heim finished second after Gibbs overtook him late in the race.

Gibbs beat Heim by 1.833-seconds after the two faced a close battle for the lead.

“It was hard racing,” Gibbs said. “The 20 [Heim] was a little excited. It was their only shot to see the front and they took it. I would’ve done the same thing. We were fast enough to pass him without touching him, which I feel is the respectful way. We put on a good show at the end.”

Heim used a bump and run to move Gibbs shortly after the final restart of the race.

It was the first time Gibbs hadn’t led all the laps in an ARCA event since Heim won at Talladega Superspeedway whereas Gibbs was collected in a wreck and finished a career-worst 27th place.

In his second ARCA start of this season, Jesse Love tied his career-best finish of fourth, set at Winchester Speedway last year. Meanwhile, Thad Moffitt finished fifth as the last driver on the lead lap. Moffitt reiterated he lacks sponsorship for five races as he seeks to compete full-time this season.

With only half of the top 10 in points competing in this race, three drivers scored their first career ARCA top 10 finish.

After racing at the home track of ARCA, these drivers will head to the home track of NASCAR as they will compete at Charlotte Motor Speedway. Neither Gibbs nor Heim has won there. For Gibbs, he is seeking to win three straight main ARCA races, last achieved by Sam Mayer last year.