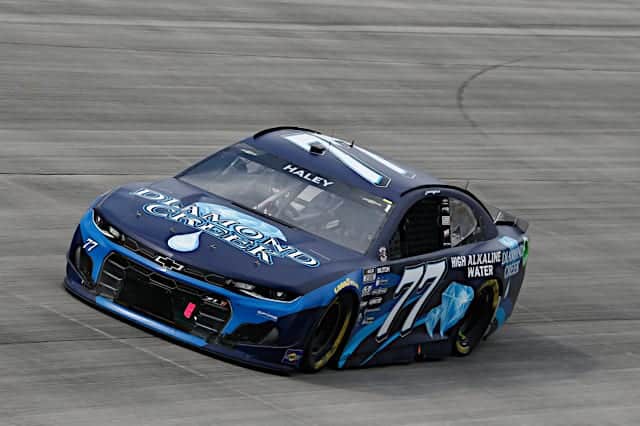 Josh Berry had no intentions of making a NASCAR Cup Series start in 2021.

Berry was thrust into the No. 77 Spire Motorsports Chevrolet and made his Cup Series debut Sunday (May 16) in the Drydene 400 at Dover International Speedway, turning in a quiet 30th-place run.

Filling in for Justin Haley, who was sidelined due to COVID-19 protocols, Berry had one frightening moment off Turn 2 that resulted in him brushing the wall in stage two to bring out the third caution on lap 171.

That was the result of an issue in the right front that looked like it should have destroyed the No. 77 car, but Berry maintained enough control to minimize the damage.

On the surface, Berry’s debut isn’t much to write home about. He finished 12 laps down in 30th place and contacted the wall.

But Berry’s story is much deeper than that. He’s spent years grinding away in late models running short tracks week after week for JR Motorsports, doing well enough to win a national championship in 2020.

That grind eventually paid dividends in the form of a part-time ride at JR Motorsports driving the No. 8 Chevrolet, competing in all but one race so far this season, a deal that’s meant to result in Sam Mayer jumping into the No. 8 Chevrolet for the second half of the season.

Berry has made a strong impression after a sluggish start to his Xfinity career. He collected his first career win at Martinsville Speedway in April and has strung together consecutive second-place finishes at Darlington Raceway and Dover. The run at Dover was strong enough to earn him the Dash 4 Cash $100,000 in-race bonus, completing a JRM sweep of the four-race incentive.

His season turned a corner in a big way after that Martinsville victory, even more than Berry expected.

“I think it was a huge confidence booster for all of us,” Berry said Saturday (May 15) after finishing second in the Xfinity Series race. “A huge weight off our shoulders. I think I made it pretty clear how badly I wanted to win and these guys did too. Going into this opportunity, I felt like if I won, that was the best possible scenario. And really, we’ve had a chance to win several.

“These races are hard to win. This series is tough. There’s a lot of experience here, so just really thankful to be doing it. I think we’re attracting a lot of attention and that’s amazing. I just can’t thank everyone at JRM enough.”

A lot of attention indeed. So much so that Spire Motorsports sought him out to fill in for Haley in the Cup race.

“It’s pretty exciting that Spire Motorsports chose me to run that car in the current circumstances,” Berry said.

To see it culminate in this opportunity, Berry was still in disbelief during the pace laps of Sunday’s race.

.@joshberry told to work some heat into brakes, "all new stuff on it", pretty quiet on radio until just now:

"Thank you guys, pretty special day for me, thank you for thinking of me'

Once he took the green flag on Sunday, it was evident Berry realized how much there was to learn. The 30-year-old had to start from the rear of the field because of the driver change but took his time learning how the car would respond to his input, eventually and methodically making a few passes before the competition caution at lap 35.

After brushing the wall, the rest of his day was quiet and uneventful — exactly what Berry needed.

Berry’s focus, of course, remains on the three races he has remaining in the Xfinity Series, where he’s started all but one race this year, the Daytona International Speedway road course being the exception where Miguel Paludo piloted the car.

His NASCAR future remains uncertain, but Berry is trying to find any and every way possible to continue finding a career path in the upper echelon of stock-car racing.

“Life’s really good right now,” Berry said. “Able to get some extra opportunities on top of what I’ve got here with JR Motorsports. I’ve got three more races with this [No.] 8 team and to have three out of the last four be first, second and second is pretty impressive. I think we’re doing everything we can right now.”

Despite missing that one race, which makes him ineligible for the playoffs, Berry sits 14th in Xfinity driver points.

The series heads to its inaugural race at Circuit of the Americas on Saturday, May 22 with live television coverage at 4 p.m. ET on FS1.