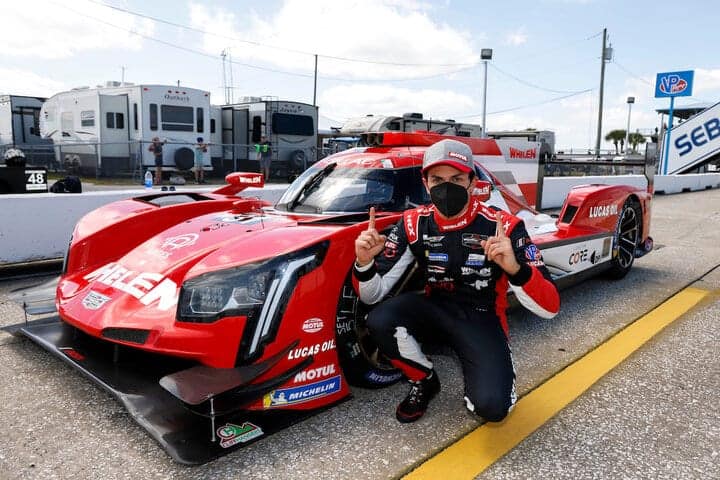 However, things aren’t all swell at the Gary Nelson-run team.  Jimmie Johnson‘s qualifying session went ok at the start.  He didn’t have the pace of his teammate, but he was gaining experience and putting down better laps as the 15-minute session continued.  Then, on what would have been his fastest lap, disaster struck.  Johnson went through turn 16 too quickly and spun on exit.  That spin likely roasted his tires and would have required a tire change before the race.

Once Johnson restarted, he attempted to charge into Sunset Bend to finish out his session.  Unfortunately, the Ally Cadillac spun again.  This time, the consequences were significantly more dire as Johnson went hard into the tires.   Johnson explained what happened after the session.

This team is so well prepared and confident to overcome any setback. The positivity in the garage is still high for the #Sebring12

Going to a spare tub is legitimately a backup car for Johnson, Kamui Kobayashi and Simon Pagenaud.  It will be a long night in the paddock for Action Express Racing as they build the spare tub into the new No. 48.

The LMP2 class saw PR1 Mathiasen Motorsports’ Ben Keating lead for much of the session.  In the closing minutes, things changed, though.  WIN Autosport’s Steven Thomas set down a lap at 121.270 mph that stood up to claim the class pole.  Keating was one-eighth of a second back in second, with Era Motorsport’s Dwight Merriman in third despite a spin exiting the Tower Turn (turn 13).  United Autosports’ Jim McGuire will start fourth.

The LMP3 class saw Performance Tech Motorsports overcome their issues from Thursday.  Rasmus Lindh set a new LMP3 track record with a lap at 116.068 mph to win the class pole.

Lindh’s lap was six-hundredths of a second faster than the Duqueine-M30-D08-Nissan of Oliver Askew.  Askew had quite the struggle Friday as he had to deal with what IMSA Radio’s John Hindhaugh described during the qualifying broadcast as “moments of bounciness.”  What that means is that his Duqueine chassis was all over the place.  In Sunset Bend, the car would bounce so heavily that the rear wheels would come off the ground while traveling over the bumps.  If that happens, it is difficult to get the power down to the ground.

In GT Le Mans, Corvette Racing clearly brought their A-game to the session.  The two Corvettes were never seriously threatened for the pole.  Antonio Garcia won the pole with a new class record lap at 117.170 mph.  The lap was three-hundredths of a second faster than teammate Tommy Milner.  BMW Team RLL’s Connor de Phillippi was third, then Jesse Krohn and WeatherTech Racing’s Cooper MacNeil.

Qualifying for the GT Daytona class was run in two phases.  The first phase determined the class grid, while the second determined the points that will eventually be awarded.

In the first phase, PFAFF Motorsports had serious issues.  Zacharie Robichon slid off at the Tower Turn and nosed into the tires on his first lap at speed.  Shortly afterwards, he slid off again.  Eventually, the team determined that they had issues with the ABS system.  Robichon tried to drive the car like the brakes were normal and paid the price.  As a result, Robichon will start at the rear of the field Saturday, having recorded a lap more than a minute off the pace.  Luckily, the Porsche could be fixed prior to the second phase of qualifying.

The phase ended up being a back-and-forth duel between GRT Grasser Racing Team’s Tim Zimmermann and Wright Motorsports’ Jan Heylen.  As the session continued on, the times continued to drop.  Zimmermann set a lap at 112.191 mph with a minute remaining which held up at the time to give Zimmermann his first career IMSA pole.

However, post-qualifying technical inspection saw a Verizon Wi-Fi hotspot discovered inside of Zimmermann’s Lamborghini.  This is a violation of the IMSA WeatherTech SportsCar Championship’s Technical Regulations due to the fact that this could enable two-way telemetry between the car and team.  As a result, Zimmermann will start Saturday at the rear of the class.

With Zimmermann’s time thrown out, Heylen inherits the pole with a lap at 112.128 mph.  Heylen’s lap was two-tenths of a second faster than Alegra Motorsports’ Daniel Morad, who got there with a quick lap right at the end of the session.  Vasser Sullivan teammates Aaron Telitz and Frankie Montecalvo will start third and fourth, while Turner Motorsport’s Robby Foley was fifth.

In the all-Pro second phase for points, Jack Hawksworth quickly put himself at the top of the charts and stayed there for the whole session.  By the time the 15-minute session (run in concert with the GT Le Mans session) was complete, Hawksworth had set a new class record with a lap at 112.909 mph.

Hawksworth’s lap was three-eighths of a second faster than PFAFF Motorsports’ Laurens Vanthoor.  The PFAFF squad was able to fix their braking issues between the two phases to get Vanthoor out there with a good Porsche 911 GT3 R.

The Mobil 1 12 Hours of Sebring presented by Advance Auto Parts is scheduled to go green at 10:10 a.m. Saturday morning.  Coverage will be split between NBCSN and NBCSports.com.