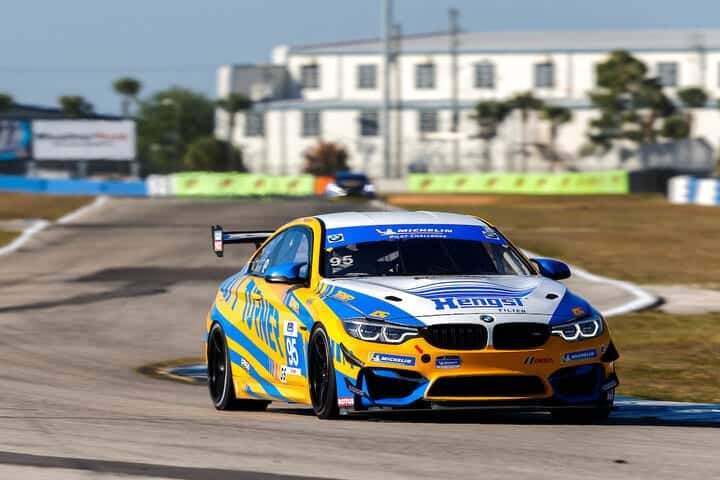 Turner Motorsport’s Bill Auberlen was fastest overall in Michelin Pilot Challenge practice Thursday (March 18) with a lap at 102.937 mph.  Despite the quick pace, Auberlen’s lap was still a half-second off of his own track record, set in 2019.

Michelin Pilot Challenge teams first got out on track Wednesday afternoon for one hour of practice on the 3.74-mile road course.  Here, Andrew Wojteczko Autosport’s Kuno Wittmer showed that he hadn’t lost any of his pace from Daytona.  Wittmer ended up fastest overall with a lap at 102.619 mph.

Murillo Racing’s Eric Foss had the fastest Mercedes in sixth, then HTP Winward Motorsport’s Indy Dontje.  Robby Foley was eighth in his Turner Motorsport BMW sporting new sponsorship this weekend from the streaming service DAZN.  Rebel Rock Racing’s Robin Liddell was ninth in his Camaro, while Matt Plumb was 10th.

TCR saw the Hyundais dominate the speed charts.  CB Motorsports’ Trenton Estep was fastest with a lap at 99.187 mph in his Veloster N TCR, good for 21st overall.  Estep’s lap was one-third of a second faster than Copeland Motorsports’ Tyler Gonzalez.  Stephen Simpson was third fastest, while Ryan Norman had the fastest Elantra N TCR in fourth.  KMW Motorsports with TMR Engineering’s Tim Lewis Jr. had the fastest TCR lap by a non-Hyundai in fifth.

Atlanta Speedwerks’ No. 94 Honda ran into some trouble in the session, completing only two laps (an out lap and one lap remotely close to at speed) in the session with Ryan Eversley at the wheel before finding the issues.

Got one lap of practice before a mechanical issue sidelined us for the session. Greg will take most of tomorrow’s session so I’ll have to figure it out in the race.. @Honda @HondaRacing_HPD @ATLspeedwerks pic.twitter.com/tSsaE6tWgJ

LA Honda World Racing’s No. 73 Honda did not venture out onto the track during the session.  In addition, Atlanta Speedwerks’ Brian Henderson ran into trouble during the session that brought out a red flag.  Another incident involving Copeland Motorsports’ AJ Muss also caused a red flag.

In Thursday’s practice session, Auberlen set his quick time on his final lap of the session.  It ended up being nearly a half-second faster than Heylen.  Foley was another two-tenths of a second slower in third.  Hindman was fourth fastest, while Foss was fifth.

Motorsports In Action’s Spencer Pigot was sixth in his McLaren, while Liefooghe and Dontje were seventh and eighth.  Wittmer was ninth fastest, while PF Racing’s Chad McCumbee was 10th in his Ford Mustang GT4.

TCR saw Atlanta Speedwerks’ Robert Noaker, who impressed in Daytona, go fastest with a lap at 99.749 mph, good for 20th overall.  This lap came after the team all but skipped Wednesday’s session.  There, they only completed one lap before pulling in.

Noaker’s lap was one-sixth of a second faster than LA Honda World Racing’s Mat Pombo following some work back in the paddock.  Norman was third in his Elantra, while Taylor Hagler was fourth in her Veloster.  Eversley was fifth fastest.