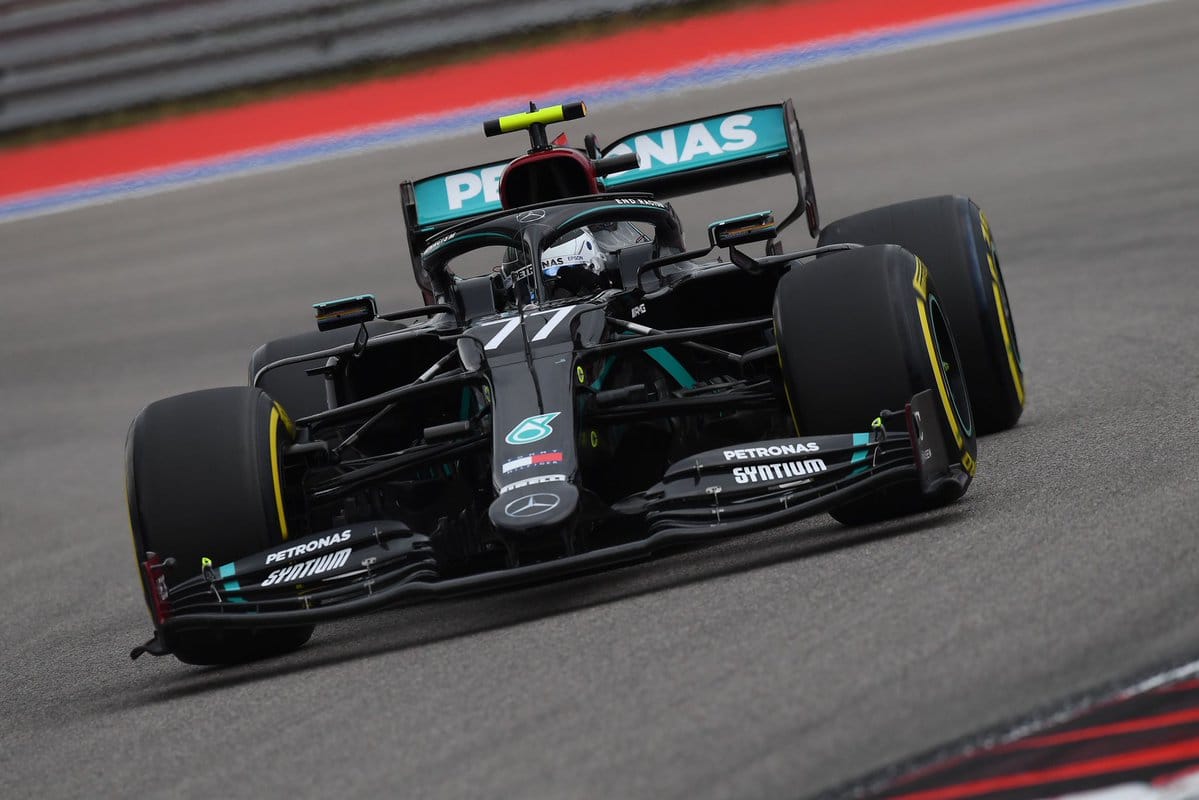 Valtteri Bottas nabbed his fifth pole position of the 2020 Formula 1 season on Saturday night (Dec. 5).  The Fin held off his temporary teammate by 0.002 seconds to secure the pole and earn Mercedes another front-row lockout.  George Russell, filling in for the COVID-stricken Lewis Hamilton, looked impressive in his drive for the Silver Arrows after he was called up from the Mercedes-affiliate Williams.

Max Verstappen looked like he would be the real beneficiary of Hamilton’s absence, with pole well within reach, but he could muster only so much in his Red Bull.  Charles Leclerc may have provided the most impressive drive, laying down a blistering lap in a Ferrari that has shown little in the way of top-end pace throughout this season.  His surprising lap puts him in fourth alongside Verstappen in the second row.

Sergio Perez continued his strong late-season run by claiming fifth for the Sakhir GP.  Perez has shown excellent qualifying and race pace during the latter half of the season and his status as an unsigned driver for next year grows increasingly comical with each race.  Starting with Perez in the third row will be Daniil Kvyat who came through for AlphaTauri.

Daniel Ricciardo’s pace in the Renault has seemed to have dropped over the past few races and the driver who is enjoying his penultimate race with the French manufacturer earned seventh for the race.  Carlos Sainz looked like he might place in the top five but finds himself starting eighth on Sunday.

Pierre Gasly, who has looked like the future for AlphaTauri, wound up ninth and will start with Lance Stroll beside him on the fifth row.

The series is utilizing the same track as last weekend’s Bahrain GP but the configuration looks almost like a quad-oval.  The high speeds from this less twisty and means that drivers are pushing their cars more flat out than they do at other tracks.  The result of this setup is that lap times are under one minute and the track is seemingly more crowded.

Gaining a tow, or using the slipstream of the car in front, has benefits but the fast straights lead to hard breaking where the tow can be mitigated.

One of the struggles in qualifying came when teams found it difficult to place a driver in an open spot in an attempt to give them the best ability to enjoy clean air.  This scenario played out disastrously for Lando Norris and McLaren, who never slotted into the right spot and Norris failed to get out of Q2 and will start in 15th.  His result showcases how the starting grid will be a bit of a mix-up at the start.  The fascinating thing to see will be whether or not faster cars in the rear can make their way through.

One driver who merely needs to hold on is George Russell.  His second-place qualifying effort looks stellar.  While Bottas may have capitalized on Hamilton’s absence to claim the top spot, it is Russell who looks brilliant after narrowly missing out on pole.

In what could be asserted as ‘what a difference a car makes’, Russell’s jump from Williams to Mercedes shows that he is not without talent but rather he is without a car to match his talent.  His result puts pressure on both Bottas and Hamilton.

For Bottas, he could easily be supplanted by the young Briton.  For Hamilton, some of his negotiating leverage for his current contract talks may have been eroded – not by a lion’s share but Mercedes now have data that could maybe shave a million off the final total.

One driver who may have driven himself out of the sport is Alex Albon who needed a solid qualifying effort but would up 12th.  With team principal Christian Horner maintaining that the seat is Albon’s to lose but that he also has to win it, there is an increasing sense that he has lost it.  With Perez in the lurch, it is not unfathomable to see the Spaniard taking over for Albon.