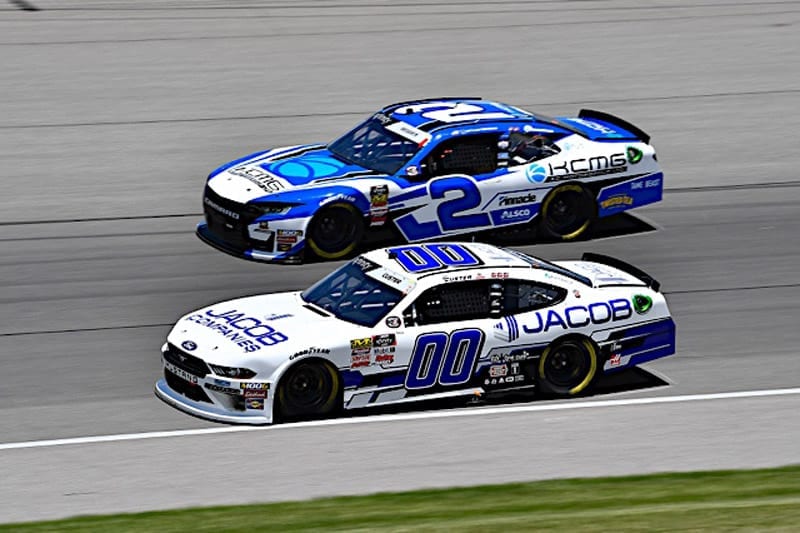 Christopher Bell, Cole Custer and Tyler Reddick have provided some of the NASCAR Xfinity Series’ most thrilling moments over the last two years. The trio entered NASCAR’s secondary division after a few years of flux between them, with each spending time in the Gander RV & Outdoors Truck Series prior to their first series switch.

In the time before 2018, before all three simultaneously competed full-time in Xfinity competition, they flashed their talent in various ways. Custer was the first to visit victory lane, with a 2014 Truck Series triumph at New Hampshire Motor Speedway, winning at World Wide Technology Raceway at Gateway the following year. Reddick was next, winning the 2015 season opener in the series at Daytona International Speedway and adding trophies from Dover International Speedway the same year and Las Vegas Motor Speedway the next.

Finally, Bell came onto the NASCAR scene in a spray of dirt and mud, winning at Eldora Speedway after a legendary barn-burning battle with Bobby Pierce in 2015. A win at Gateway in 2016, his first full year of Truck competition, gave way to a five-win championship season in 2017. That debut in the dirt for Kyle Busch Motorsports paid dividends for Bell, who later moved up to the Xfinity Series with Joe Gibbs Racing.

Custer was the first to go full time at the penultimate step of NASCAR, winning his first race at Homestead-Miami Speedway in 2017. Bell and Reddick also won that year, albeit in part-time schedules, at Kansas Speedway and Kentucky Speedway, respectively. Finally, in 2018, the three young guns competed alongside each other full time in the Xfinity Series. Each piloted a car for the subsidiary of some of NASCAR’s premier teams – Bell for Gibbs, Custer for Stewart-Haas Racing and Reddick under the Richard Childress Racing mantle.

Bell shone the brightest as the season wore on, winning seven races, while Custer had one win and Reddick had one of his own prior to the season finale – a 0.0004-second margin of victory triumph over Elliott Sadler in the season opener at Daytona.

Homestead saw the tables turn over completely, however, as Reddick took advantage of issues for some of the championship drivers and outdrove others to win the 2018 championship.

2019 saw a shift in the trio’s dynamic, while also being a defining year for them. Bell, Custer and Reddick became a Big 3, something everyone saw in the Cup Series the year before.

The three drivers combined to win 21 of the 33 scheduled races – Bell with eight, Custer seven and Reddick six. That sixth win for Reddick came at Homestead and clinched his second consecutive title.

This powerhouse trio also put on one hell of a show in Miami; late in the race, all three cars ran under a blanket for several laps after pit strategy put them near one another, each desperately trying to outrun the other two.

After all this, they will be climbing into NASCAR Cup Series machines in 2020.

Hang on to your seat belts, folks.

Their diverse driving styles – Bell’s dirt-tracking in the top groove, Reddick’s aggressive but calculated moves and Custer’s calm and collected passes – will all be on full display in the Cup showcase next year.

They’ll inherit Cup rides of all three manufacturers, but they’ll stay with the same teams. Bell will be in Leavine Family Racing’s No. 95, but that team has a technical alliance with JGR. Custer fills the No. 41 SHR seat vacated by Daniel Suarez, while Reddick takes over the RCR No. 8 from Daniel Hemric.

Bell is the lone wolf of this trio without a Cup start entering 2020. Custer had three in 2018 for Rick Ware Racing in a partnership with SHR, while Reddick entered two races in 2019, crashing at Daytona before finishing ninth at Kansas in RCR’s No. 31 Chevrolet.

By no means is this a bad thing. We still have the memories of their battles, which will hopefully continue on an even bigger stage. Besides, all three will be competing for a Rookie of the Year title in 2020, so those battles will certainly continue.

Their departure also opens the door for even more Xfinity action. Ross Chastain and relative newcomers Austin Cindric and Chase Briscoe all grabbed trophies in 2019, and all three will more than likely be some of the top performers in 2020 (assuming Cindric and Briscoe return to their seats), alongside veterans like Justin Allgaier. Harrison Burton will take over Bell’s empty seat, but as of this writing no drivers have been announced for either Custer or Reddick’s former offices.

It is a changing of the guard. It’s the way NASCAR’s gears have always turned, and those drivers headed for faster pastures both set the stage for more excitement in the Cup Series and open the door for the same in the series below.