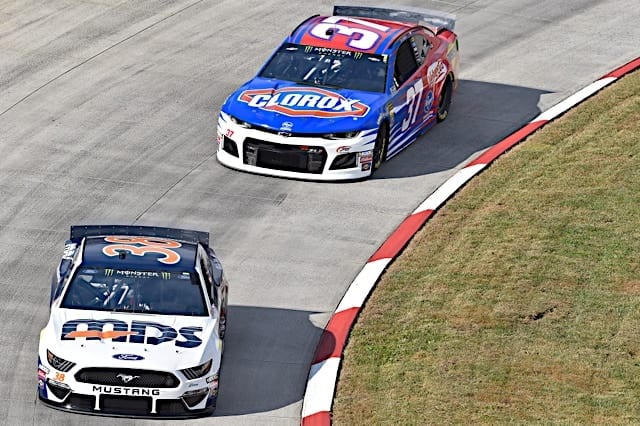 David Ragan announced earlier this year that he would be stepping away from the role of full-time NASCAR driver to focus on the role he plays within his family. He got a solid sendoff from Martinsville Speedway on Sunday (Oct. 27).

Ragan, a two-time winner at the Monster Energy NASCAR Cup Series level, earned his best finish of 2019, and his first top underdog honors of the year with an 11th-place finish at the Virginia half-mile paperclip. Ragan has been more of a footnote alongside teammate Michael McDowell, who has the best finishes for Front Row Motorsports this year. But McDowell faded to 23rd at the finish after qualifying fifth and Ragan was the one who brought the team a solid finish.

Following Ragan across the line was Chris  Buescher in 12th. The JTG Daugherty Racing driver continued that team’s lengthy history of admirable results at Martinsville. Bubba Wallace, who had a great run, stayed out of trouble and wound up 13th at the checkered flag.

The NASCAR Gander Outdoors Truck Series hit the track on Saturday and the underdogs were running wild. Ross Chastain may have finished second (might be time to pull their underdog status) but there were many more remarkable outings.

Joe Bessey was a lifelong underdog in the NASCAR Busch (Xfinity) Series. Bessey ran his own teams in practically everything. To put it in perspective, Bessey ran 301 combined races in what is now known as Cup, Xfinity, Trucks, K&N Pro Series and ARCA. He was listed as the owner in all but 12 of them. If there was ever anyone who was determined to do things on his terms, it was Bessey.

Running a homegrown operation puts anyone at a disadvantage, but also being the one behind the wheel ups the difficulty level considerably. He managed a few wins at the K&N level, known at the time as the Busch North Series. But the majority of Bessey’s focus was on the second highest division in NASCAR.

Coming into the 1997 season, the Maine native had just a pair of top-five finishes, both coming in 1993. There wasn’t much more to be excited about as the year went along. Bessey did manage to win his first pole position at Gateway that summer, but only three finishes better than 17th through 25 races.

The 26th event of 1997 was held at Dover International Speedway. Bessey qualified sixth and spent time among the frontrunners, though never leading a single lap. Then, running second with less than 15 laps remaining, Bessey made a move to the inside of race leader Buckshot Jones.

Depending on who you ask, Bessey either dumped Jones or Jones came down on the leader as they exited turn 2. Either way, Jones spun and ended up going headlong into the inside wall. Bessey held off eventual series champion Randy LaJoie on the final restart to score what would be his only win.

Joe Bessey never sniffed victory again. He earned one more top five the next year, and following his final start at Nazareth in 2002, Bessey quietly disappeared from the NASCAR scene. But for that one day in September of 1997, the Power Team car beat all of the power team drivers.

Top 5 baby! What a fun day of racing! Can’t thank my crew chief Greg Ely enough for the hard work! I have a great group of friends that come support me on weekends that really make this possible. Great pit stops by the @MBMMotorsports crew too!

And of course the response from alleged Scooby-Doo villain @Chris_Buescher pic.twitter.com/u4Wj2i69hO