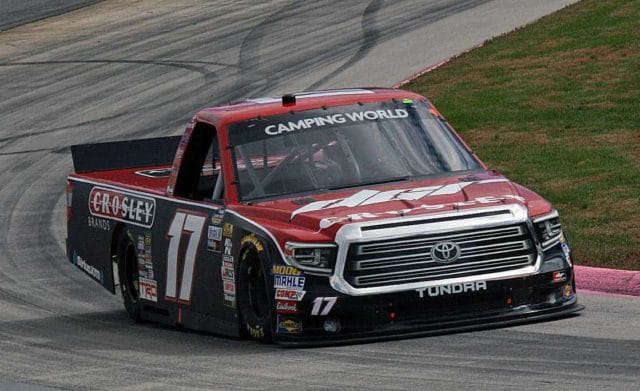 Kyle Benjamin has been a name showing up out of the blue this season.

Piloting entries in both the NASCAR XFINITY Series and the Camping World Truck Series, Benjamin has attempted to make his name known with a part-time schedule, and he’s done well with the little platform he’s been given. Benjamin finished second in the spring in his NCWTS debut at Martinsville Speedway, and two out of his three XFINITY starts this season resulted in top-10 finishes.

On Saturday (Oct. 27), Benjamin piloted the No. 17 for DGR-Crosley at Martinsville, the same organization he drove for when he placed second in his Truck Series debut. The first mission was accomplished for Benjamin by qualifying the No. 17 into the field of 32 in a truck that didn’t have many owner points to fall back on.

Starting the race from fifth, a strategy call put Benjamin back into position to threaten for victory again. When everyone else took tires, Benjamin’s team decided not to pit to gain track position.

On older tires, Benjamin didn’t move forward in the field, but he didn’t lose much either. As the laps wound down, those tires made it more and more of a struggle, but he finished the race fifth — his second top-five finish in two races.

“It was tough not taking tires right there,” Benjamin said. “I felt like we had a really good truck to be able to do that. It definitely hurt us firing off on the last few starts right there with no rear grip.

“I really do think we had a second-place truck, though if we had the new tires and been on the right strategy in the end… Then again, that strategy that we were on helped us get to that point to be in position to do what we did, so really thankful to Bono for making that call and him bringing a fast truck,” Benjamin said. “I don’t really think we could’ve competed with him [Johnny Sauter], I think we were a strong second, but he had us all killed.”

A majority of Benjamin’s career has been filled with running races when he was needed, with the exception of the 2016 NASCAR K&N Pro Series East season. As noted, Benjamin ran three XFINITY races and two Truck Series races, but from what Benjamin told Frontstretch after the race, that’s all for him in 2018.

The real question is, did Benjamin do enough to catch someone’s eye? He thinks so.

“I think I’m done,” Benjamin said about this year. “I did the most I could do with what I had. I feel like it might have been enough [for future opportunities], but I am optimistic something will happen next year.”