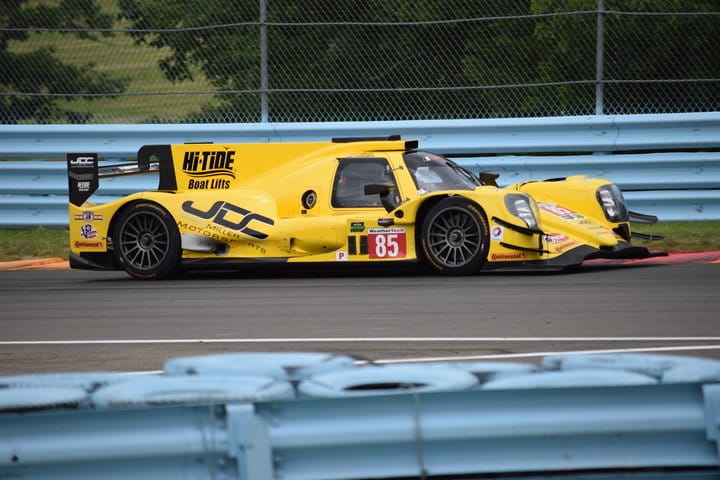 On Tuesday, JDC-Miller MotorSports announced that Robert Alon has been signed to drive for the team full-time in the 2018 IMSA WeatherTech SportsCar Championship.  He will join Simon Trummer in the team’s new second ORECA 07-Gibson.  Alon also brings sponsorship to the team from Professional Security Consultants (PSC), a security firm founded and run by Robert’s father, Moshe Alon.

The team tested that car at Sebring in November with the No. 84.  However, that car will now race as the No. 85 in the wake of the team’s recent partnership with GAINSCO Auto Insurance.  That partnership has resulted in the previous No. 85 changing their number to No. 99.

Alon is happy to be back in a Prototype.

“I always had the goal of running in Prototype and have stayed in contact with [team co-owner John Church] throughout the years,” Alon stated.  “[JDC-Miller MotorSports] is coming off of a very competitive debut in Prototype where I watched them regularly compete for
overall wins. With the expansion to a two-car program for 2018 it just felt like the right time to move up and do something together.

“When I tested with [JDC-Miller MotorSports] earlier this month in the ORECA 07 LMP2, I felt right at home,” Alon continued.  “The ORECA is a great car and I’m sure we can be competitive in 2018.”

Tuesday’s announcement was preceded by two instances that foreshadowed the move.  One was Alon sharing a car with Trummer at the recent test at Daytona International Speedway.  Second, JDC-Miller MotorSports added the PSC logo to their homepage at the same time they announced the aforementioned GAINSCO deal.

Alon comes to JDC-Miller MotorSports after spending the 2017 season at 3GT Racing.  The 27-year old racer spent most of the season in the No. 15 Lexus alongside Jack Hawksworth before a lineup change saw him move to the No. 14.  In 12 starts, Alon’s best finish was fifth in GT Daytona at Watkins Glen in July.  He also gained a reputation for overly aggressive moves.  For instance, Alon created this road block at the hairpin as a result of trying to pass Jens Klingmann and Jeff Segal on the final lap at Long Beach in April.

The GT Le Mans victory went to the No. 4 Corvette of Oliver Gavin and Tommy Milner solely because of the crash Alon created.  Alon would eventually be credited with an 11th-place finish.

Alon does have Prototype experience.  In 2016, he ran the full season in the Prototype Challenge for PR1/Mathiasen Motorsports.  Alon earned three victories and nine podium finishes on his way to second in PC points.

The move actually serves as a return of sorts for Alon.  In 2015, Alon ran a limited schedule for JDC Motorsports in the U.S. F2000 National Championship in addition to running IMSA Prototype Lites for Performance Tech Motorsports.

The team still has not announced endurance drivers for the newly rechristened No. 85 ORECA.  Look for those drivers to be revealed in the next two weeks.