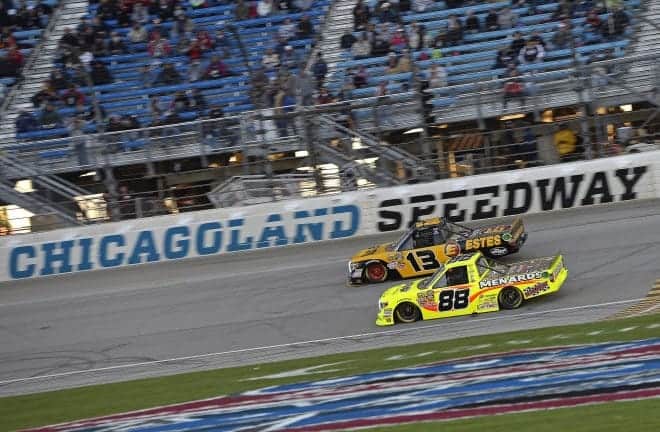 Next up for the NASCAR Camping World Truck Series: 225 miles on the outskirts of Chicago.

JR Motorsports will welcome a new face when Kyle Larson hops behind the wheel of the team’s No. 00 Haas Automation Chevrolet. Larson, a sophomore in the Sprint Cup Series, has one career win in the Truck Series, coming in 2013 at Rockingham Speedway.

The good news for NCWTS regulars is that Kyle Busch will sit out of Friday’s race. In his place, Daniel Suarez and Matt Tifft will join Erik Jones to complete the Kyle Busch Motorsports lineup.

Ross Chastain will make his first Truck Series start of 2015 in a partnership with Hattori Racing. Chastain will drive the team’s No. 18 Toyota, with sponsorship from AISIN.

K&N Pro Series East winner Jessie Little will look to overcome a difficulty debut as he returns for his second-career start. Little, son of former Cup Series regular Chad Little, will compete in the No. 97 Nextant/Curb Records Toyota for ThorSport Racing.

The NASCAR Camping World Truck Series will return to action at Chicagoland Speedway on Friday, Sept. 18, beginning at 10 a.m. ET with a 165-minute final practice session. The field will return for Keystone Light Pole Qualifying at 4:35 p.m. ET. Coverage of the American Ethanol E15 225 will begin at 8:30 p.m. ET.