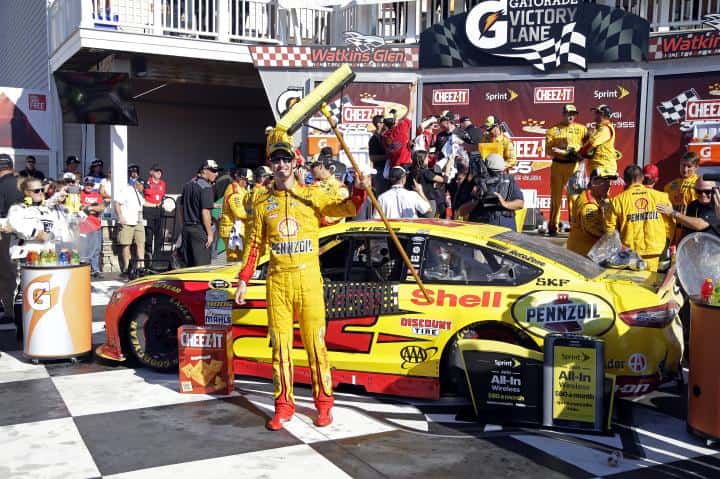 It’s about time for Joey Logano. With multiple weeks of being so, so, close to earning a second win in 2015,  the 25-year-old finally did it in thrilling fashion at Watkins Glen International.

The 2.5-mile New York road course once again brought a high level of excitement, drama and a sold-out crowd for the first time in the track’s history.

The final laps mirrored what NASCAR nation witnessed one week ago at Pocono Raceway, when fuel was the deciding factor among the front runners and mid-pack contenders.

“What goes around comes around, I guess,” Logano said after running out of fuel while leading at Pocono last week. “It’s cool to get through on the other end.”

With an unexpected 30-lap run to the end – in a race often plagued by late-race catastrophe and yellows – Kevin Harvick, Matt Kenseth, Kyle Busch and Logano found themselves leading the conservative parade.  Except that Logano and Busch both had enough to race hard until the end.

With Kenseth now a fuel-mileage winner, Logano would probably stand out as one least likely to pull off a fuel mileage win – let alone on a road course.

Perhaps the Xfinity Series checkered flag on Saturday gave Logano the boost he needed for Sunday.

Joe Gibbs Racing, although not victorious, had a very eventful day at The Glen.

While Busch sneaking across in second and Kenseth taking the fourth spot, Denny Hamlin had a bizarre incident early when a chain-reaction collision involving Hamlin’s No. 11 caused the hood to pop up. Continuing for two laps, Hamlin brought the car to pit road and ended the day in 27th spot.

Busch’s four wins, before Sunday, was damn impressive, but not enough to make the Chase. Now, Busch is in the top 30 in driver points, as a runner-up result advanced him past that crucial spot.

“It was just a matter of time,” Busch said on reaching the top 30. “That was probably another reason we didn’t need to run out of gas and have an issue here today.”

Carl Edwards was among the disappointments of the afternoon. Yes, he came home in eighth spot, but with four top fives in the last six Watkins Glen starts, many expected the first-year JGR man to contend for the W.

Michael Waltrip Racing found light in their 2015 season, as Clint Bowyer came home sixth after running top 10 most of the day. David Ragan, for the second straight race, ran out of fuel coming to the white flag. A top-10 car turned into a dreadful 23rd-place finish.

AJ Allmendinger had the media on the backside from the checkered flag at Pocono last week, to the time he left the garage on Sunday afternoon.

With a second straight road-course pole, the defending Watkins Glen winner led the opening 20 circuits. Unfortunately, problems found the No. 47 once again as ‘Dinger’ lost power under a lap 51 caution.

Jamie McMurray, Jeff Gordon and Tony Stewart. Wait, where did they finish again? For three drivers who have proved to be skillful road-course talents in their careers, they had very tough days on Sunday.

McMurray was simply in the wrong place, wrong time when a stack-up crash on lap 50 tore up the front and rear o his McDonald’s Chevrolet.

Gordon would have early brake line issues, leaving the No. 24 Chevrolet in the pits, hood up, for four laps.

Stewart grabbed our attention for the third straight week, qualifying a season-high third. However, the three-time title holder had a failed seal on a rear-end gear on lap 56, finishing 43rd.

In what was an emotional day for Stewart – Sunday marking the one-year anniversary of the accident involving him and the death of Kevin Ward Jr. – a disappointing result did not fluster Smoke, who noticed the improvements over the past month.

“I feel like we are starting to gain some momentum,” Stewart said. “Like I said, it won’t show it at the end of the day on the results, but I feel good about our weekend.”

On the good side of things, there were drivers who left the Glen in happy moods with happy finishes.

Danica Patrick got a career-best road-course result of 17th, followed by Casey Mears, Justin Allgaier and Michael McDowell in 20th, who got his first top 20 of his season.