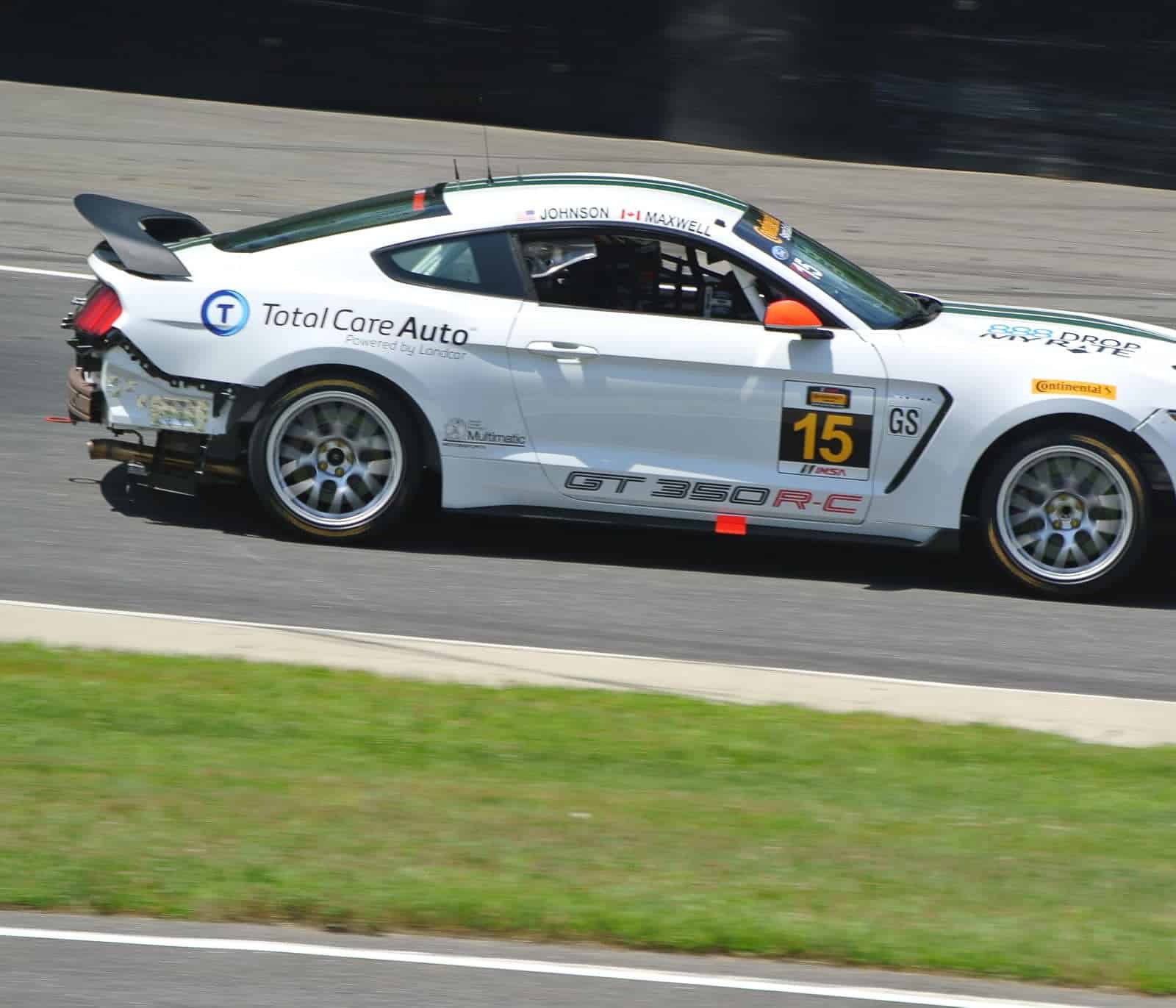 Once the fog burned off at Lime Rock Park in Connecticut, the IMSA Continental Tire SportsCar Challenge rolled off for their two-hour combined race. Multimatic Motorsports may have won the last time out at Canadian Tire Motorsports Park with Austin Cindric and Jade Buford, but their second car, the No. 15 was destroyed in a crash. A massive rebuild began. Prior to the race weekend, Multimatic Motorsports built a completely new car from scratch in about nine days.

The fear ahead of the event was that running the Grand Sport (GS) and Street Tuner (ST) classes together was that it was going to be a caution-fest. While there were incidents, there were only two full course yellows over the 113-lap distance.

The first and most serious of those occurred on the first lap when Ashley Freiburg had contact with the No. 8 Mantella Autosport Camaro driven by Anthony Mantella. Freiburg’s BMW M3 went straight off the road at turn 4 and plowed head-on into the tire barriers. Freiburg was ok, but the No. 46 BMW M3 was done for the day. Neither Freiburg or teammate Trent Hindman would earn any points. Officials declared the crash to be a racing incident and did not assess any penalties. On an unrelated note, Mantella did have to serve a pass-through penalty after he was judged guilty of jumping the start.

Polesitter Matt Bell was in control early on, but he had the Rum Bum Racing Porsche No. 13 of Hugh Plumb giving chase. Plumb was able to get past Bell on lap 21 and take the lead briefly. A few laps later, the leaders approached the No. 74 Audi S3 of Jim McGuire. Bell took advantage of the traffic to retake the lead. Bell’s Stevenson Motorsports teammate Andrew Davis tried to pass Plumb as well. McGuire forced Plumb to check up and Davis could not avoid running into the back of Plumb. Plumb’s Porsche 911 spun and hit the tires exiting Big Bend, damaging the No. 13 significantly and ending any chance for a decent finish. They would return to the race after extensive repairs and finish 10th in class (34th overall).

After the stops, Bell’s co-driver Lawson Aschenbach inherited a small lead over the two Multimatic Shelby Mustang GT350R-Cs. The No. 15 of Billy Johnson had started at the rear of the GS field after failing to put up a lap in qualifying Friday. Starting driver Scott Maxwell had blitzed the pack early on to move into the top three, then overtook teammate Cindric’s No. 158 just before their pit stop for second.

Johnson then proceeded to run down Aschenbach and make the pass stick on lap 69. Shortly thereafter, Aschenbach spun in turn 4 while trying to keep pace. He would continue, but dropped all the way back to fifth.

The second full-course caution came out with 20 minutes to go when the No. 92 ST-class Honda Civic Si of Steve Eich stopped on course with a small brake fire. That closed up the pack for the final charge to the finish.

Once the green came back out, Johnson was able to get the jump and pulled away to take the victory, an amazing achievement given the circumstances that the team had to deal with.

Afterwards, Maxwell was more than willing to give the credit to the Multimatic Motorsports team for the victory.

“This [win] is all for the Multimatic crew and Ford Performance for building us a brand-new car from the ground up in nine days,” Maxwell said after the race. “It never turned a wheel until [Friday], then we had problems in qualifying as well, which made it more difficult on ourselves. I stayed out of trouble in my stint and Billy [Johnson] was amazing in the last hour.”

Johnson described how he was able to make what turned out to be the pass for the win on Aschenbach on lap 69.

“The [No. 9] has been fast all weekend, while we struggled a bit,” Johnson exclusively told Frontstretch. “It just came down to race craft. [Aschenbach] was defending into a corner and I was able to capitalize off that and do an over-under on him up the hill out of better entry and the preferred line. I was able to get next to him, and the rest was history.”

Buford was able to hold off Zacharias for third. The Stevenson teammates finished fourth and fifth, with the No. 6 of Davis and Robin Liddell in fourth.

In ST, CJ Wilson Racing was in control from the start. When the green came out after Freiburg’s crash, polesitter Chad McCumbee immediately began to open up a gap over the rest of the pack. Jeff Mosing and Justin Piscitell tried to keep pace, but slowly fell back by over seven seconds.

McCumbee stopped relatively early to put on left-side tires and switch to Stevan McAleer. The fresh lefts, plus some trouble in pits for their competition, meant that by the time the stops wrapped up, McAleer had a 20-second lead over Murillo Racing’s Eric Foss and 25 seconds over Alara Racing’s Christian Szmyczak.

Eventually, Szmyczak fell back with issues that took him out of the hunt, allowing Rennsport One’s Spencer Pumpelly to move up to third. The caution due to Eich’s issues bunched everyone back together for the final 16 minutes of the race, but neither Foss nor Pumpelly could do much with McAleer.

Instead, Foss and Pumpelly had a spirited battle for second for the remaining time. Pumpelly put his nose to the inside of Foss on multiple occasions, but just could not get his Porsche Cayman past Foss’ Cayman. Pumpelly tried one last time on the final lap to take second from Foss, but managed to get blocked by the No. 36 Cayman of Matthew Dicken.

Meanwhile, McAleer ran nearly unopposed to take the ST victory. Such was the pace of the No. 5 MX-5 that McAleer and McCumbee were the first drivers one lap down to the overall winners in eighth overall.

McCumbee was very happy that the team was able to ride their original plan to victory.

“It was our plan from the beginning to get a big lead at the start,” McCumbee said after the race.  “We knew that the second half of the race was going to be treacherous with traffic. The bigger lead I could build, the better [McAleer] would be.”

Behind the top three was the CRG-I Do Borrow No. 44 Honda Civic Si of Sarah Cattaneo and Owen Trinkler in fourth. The No. 18 Cayman for Rennsport One shared by Dylan Murcott and Lee Carpentier was fifth.

The race can be seen in tape-delayed form on FOX Sports 1 Aug 2 at noon.