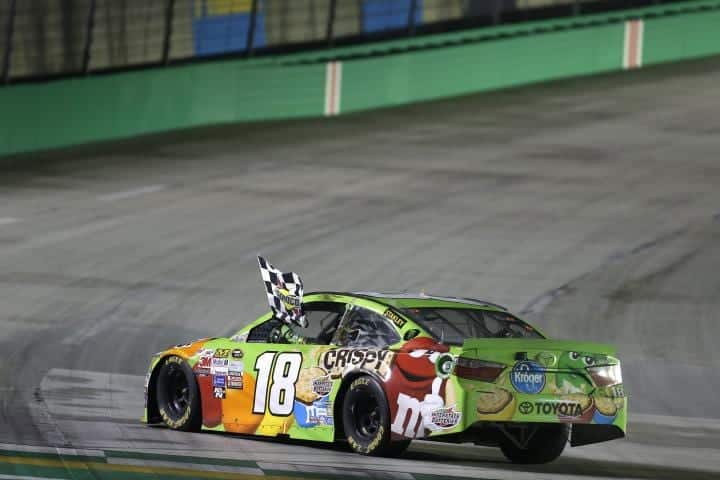 Sprint Cup Series: Busch Keeps Chase Hopes Alive With Miraculous Three Weeks – If Kyle Busch is able to make the Chase for the Sprint Cup come September, the previous three races will have been the critical part of the run.

Busch, who missed the first 11 Sprint Cup races of the season following a vicious crash in the season-opening Xfinity Series race at Daytona International Speedway, returned to the Cup Series in the Sprint All-Star Race in late May. Granted a waiver from NASCAR to make the Chase, given that he score a victory and make the top 30 in points, the Joe Gibbs Racing driver has competed in seven points races.

The first month of Busch’s return was a rollercoaster. Busch, 30, finished 11th in the Coca-Cola 600 at Charlotte, but followed it with a 36th-place run at Dover. The Las Vegas, Nevada native then earned his first top 10 at Pocono, but suffered a 43rd-place result at Michigan.

By the time the Cup field headed to Sonoma Raceway on June 28, many considered Busch an afterthought to make the Chase. Then, Busch did what he’s done throughout his career, proving his critics wrong and winning at Sonoma.

Busch’s win was a great story, but the two weeks since have been nothing short of miraculous. Seemingly out after hitting the wall at Daytona, Busch rallied to finish 17th. Saturday at Kentucky, Busch earned his second win in only seven races.

Busch now trails 30th-place Cole Whitt by a mere 87 points with eight races remaining until the Chase. His Chase hopes are very much alive. – Aaron Bearden

NHRA: I Want You To Be Perfect – Don Schumacher probably did not say this to Tommy Johnson Jr., but the fact is that Johnson made the organization perfect in the win column today. He was the last driver among Don Schumacher Racing’s seven Top Fuel and Funny Car entries who had not yet scored a win in 2015, but he fixed that and joined his teammates in the winner’s club with a victory at the Lucas Oil Route 66 NHRA Nationals from Route 66 Raceway in Chicago this weekend.

DSR was guaranteed the Funny Car prize as Johnson squared off against teammate Matt Hagan in the final. Johnson’s run of 4.259 seconds, 245.27 mph was good enough, as Hagan smoked the tires right on the launch and went nowhere. Johnson also defeated Brian Stewart, Jack Beckman and Cruz Pedregon on his way to the finals.

Johnson was one half of a DSR nitro sweep as teammate Tony Schumacher took home the Top Fuel trophy. Schumacher lined up next to Larry Dixon for the final and posted a 3.844 second, 322.20 mph run to best Dixon’s 3.932 second, 298.93 mph effort. Schumacher also beat TJ Zizzo, JR Todd and Dave Connolly in earlier rounds.

Pro Stock belonged to Allen Johnson this week. Johnson got off to a slow start this season but hopes this is a sign of a turnaround from here on out. He faced off against fellow veteran Larry Morgan in the finals and posted a 6.624 second, 209.88 mph run to best Morgan’s 6.667 second, 210.18 mph pass.

Johnson had to get by Bo Butner, Chris McGaha and Greg Anderson to reach the final round matchup with Morgan.

Pro Stock Motorcycle was part of the show again this weekend as well, and this time it was Hector Arana Jr. for the win, with a 6.918 second, 194.66 mph run over Matt Smith’s 6.957 second, 190.24 mph run. Arana, Jr. also defeated LE Tonglet, Jerry Savoie and Chaz Kennedy en route to the finals. Arana Jr. won this race last year, so he’s now a repeat champion.

“This is definitely one of my favorite tracks,” Arana said. “It’s a great track and I love the facility.”

In other breaking news, five-time Pro Stock champion Jeg Coughlin Jr. will be returning to the class for a three-race stint in upcoming races in Sonoma, Seattle and Indianapolis. Coughlin is teaming up with Elite Motorsports and will run the events as a teammate to Erica Enders-Stevens.

“Jeg will have the same equipment and horsepower that Erica has, and the crew will prepare that car exactly that same as they did earlier this year when Erica won some races with it,” said team owner Richard Freeman. “We want to give him every opportunity to win. If I have it my way, it’ll be Erica and Jeg in the final round at every race.”

See this Thursday’s Nitro Shots for more on this story. – Toni Montgomery

Montoya, who came into the race with a 46-point advantage over Team Penske teammate Will Power in the points standings, suffered a major setback early in the race when he received a speeding penalty. However, using timely cautions and brilliant strategy, Montoya fought his way back to a fourth-place finish.

The finish was a massive comeback for Montoya, who looked as though he was going to give up major ground in the points battle. However, equally huge were the struggles of his closest competitors. Power, the defending Verizon IndyCar Series champion, was racing inside of the top 15 when he was caught up in a wreck with Ryan Briscoe. Power would finish in 22nd.

Scott Dixon had a strong Chevrolet for Chip Ganassi Racing. Making his 250th-career IndyCar start, the New Zealander fought his way into podium contention early on, running as high as second. However, Dixon’s car suffered from issues and faded in the closing run, relegating him to a seventh-place showing.

Montoya’s comeback, mixed with his competitors woes, leave the Columbian with a 54-point advantage with only four races remaining in the 2015 IndyCar season. It’ll take miraculous runs from his competitors for Montoya to loosen his stranglehold on the 2015 championship. – Aaron Bearden

Davenport led the race’s final 35 laps, seizing the top spot on lap 16 when leader Billy Moyer slowed on the frontstretch and pulled out of the race. From there, it was all Davenport, as he drove off to earn his first-career CMH Diamond Nationals victory in an event co-sanctioned with the Lucas Oil Midwest Latemodel Racing Association.

Jared Landers led early in feature after starting on the outside pole, holding the top spot until lap 13, when he was forced to surrender the position to polesitter Moyer. Landers would fall to third, and then spin into the turn 1 wall while trying to find a way around Davenport to retake second.

Veteran Scott Bloomquist suffered issues before he could even get to the track when his rig broke down in Kentucky, but Bloomquist jumped into Landers’s backup car and rallied from 17th to finish second.

More Short Tracks: Close finishes were a theme over the weekend – In the 7th Annual Lou Blaney Memorial at Sharon Speedway (OH), Sheldon Haudenschild beat Ryan Smith to the line by a .021-second margin for a $10,000 All Star Circuit of Champions Sprint Car win. At Spencer Speedway (NY) Friday night, Tommy Catalano and Kevin Timmerman were both declared winners in what was determined to be a dead heat in the Sportsman Modified feature race. This was the second of the kind in the state of New York in the last month, as Otto Sitterly and Michael Muldoon did the same in super-modifieds at Oswego Speedway. – Aaron Creed

Sports Cars: 2017 P2 Regulations Announced – On Thursday, the FIA, Automobile Clue d’Ouest (ACO) and IMSA officially announced the new-for-2017 regulations for the P2 class that will serve as the top class in TUSC and the European Le Mans Series (ELMS) and the second-fastest class in the World Endurance Championship (WEC). It had been previously announced that there would be a bidding process to determine which companies could build the new chassis required.

The four companies that will be building closed-cockpit chassis are two existing manufacturers and two new ones to the P2 platform. The first returnee is ORECA, which currently has the closed-cockpit ORECA 05 (racing in Europe, will make its American debut at COTA in September) and the open-cockpit ORECA 03 (briefly raced in the states, more popular in Europe). They are joined by Onroak Automotive, which builds both the open-cockpit Morgan chassis and the closed-cockpit Ligier JS P2. Those who missed out include BR Engineering, which built the BR01 chassis currently being used exclusively by SMP Racing in the ELMS and Ginetta, who launched the first P3 chassis earlier this year.

The two French manufacturers will be joined by Dallara, which has not previously built a P2 chassis, but has decades of experience in racing. Their most recent experience in sports car racing here in the United States was with the Dallara DP, which still can underpin the Chevrolet Corvette DP Evo’s in TUSC. The final manufacturer will be a joint venture between U.S. based Riley Technologies and Canadian-based Multimatic. Multimatic is also heavily involved in the new Ford GT GTE car that will race in both TUSC and WEC starting next year.

In Europe, there will also be a spec-engine for the class. That was not announced on Thursday (another announcement set for September will take care of that), but the anticipated power output was announced. Organizers are aiming for 600 horsepower, an increase of approximately 140 from the current engines in Le Mans-spec. In TUSC, IMSA has been granted an exception to allow for multiple engine manufacturers to compete in the class, while maintaining the same engine benchmark of 600 horsepower. In addition, much like in INDYCAR, there will be brand-specific bodywork based on engine choice. While 2016 will likely be a lame duck season for the P2 class worldwide, 2017 could be quite interesting. –  Phil Allaway