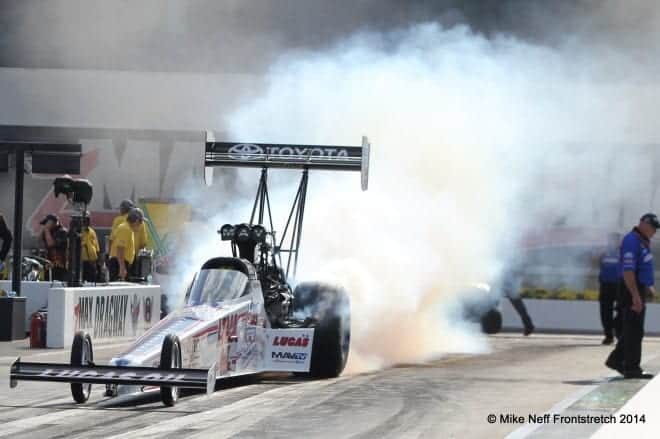 NHRA today announced the “Baptism by Nitro” campaign that will run through the 2015 season and encourages fans coming to the track to bring along a friend or family member who has never experienced live Mello Yellow Series Drag Racing before.

NHRA’s nitro divisions, Top Fuel and Funny Car, feature 10,000 horsepower vehicles that make 300 mph passes, making for an in-person experience that is truly unique in the motorsports world. The series also takes pride in it’s accessibility, with an open pit area that is enjoyed by all fans at every event. It offers the opportunity to get up close with the teams and the cars.

Fans are encouraged to share first-time nitro experiences throughout the season on social media and prizes will be given out for the best rookie reactions captured in either the pits or the grandstands. Posts should be marked with the hashtag #BaptismbyNitro and tagged to @NHRA.

Fans are also encouraged to nominate a nitro rookie at http://bit.ly/BapNitroPC1 or on the NHRA’s Facebook page in advance of next weekend’s Circle K NHRA Winternationals in Pomona and explain why their nominee should receive a VIP “Baptism by Nitro” experience. The winner will receive four race weekend tickets, VIP “Inside the Ropes” access for a nitro warm-up, and starting line access.

The NHRA plans to offer the VIP “Baptims by Nitro” experience at other 2015 events and will release more details.