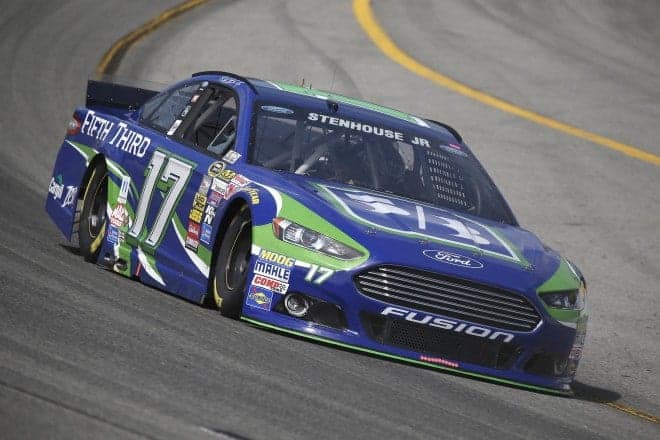 High point: Ricky Stenhouse Jr. chased after his first Sprint Cup win in March at Bristol Motor Speedway, finishing runner-up to teammate Carl Edwards. Stenhouse never got to the lead in that race, though, and couldn’t get there the rest of the season. He didn’t make it back to the top five again, either, after that. He followed up the Bristol showing with a 34th at Fontana, 40th at Martinsville and 26th at Texas, runs much more representative of his season.

Low point: Stenhouse didn’t qualify for the October race at Talladega. Until that point, it was unheard of for a Roush Fenway car to miss a race. The ill-conceived qualifying procedure didn’t help any, but he also entered the race 27th in the standings, so when his time wasn’t good enough and the Chase drivers chose to stay out of the draft, he got knocked out.

Stenhouse wound up watching the race on TV, sitting in a lawn chair beside his motor home. On top of that, Stenhouse’s girlfriend Danica Patrick stormed into the NASCAR trailer to stick up for him and admitted it to the media. So, he’ll be hearing about that forever.

Summary: After a lackluster rookie season, Stenhouse took two steps back during his sophomore campaign. His average finish dropped from 18.9 in 2013 to 22.4 in 2014, he slipped from 19th to 27th in the standings and scored a whopping 152 less points. Stenhouse also missed a race after not qualifying at Talladega and was the only driver inside the top 34 in the standings not to lead a lap.

Jack Roush reunited Stenhouse with crew chief Mike Kelley at the start of the season in hopes that they might find some of the magic that led Stenhouse to back-to-back Nationwide titles with Kelley in 2011-12. Instead, Stenhouse’s performance dropped off even more as Roush Fenway as an organization struggled. Edwards placed ninth in the standings and Greg Biffle was 14th, leaving Stenhouse a long way behind his teammates.

2015 Outlook: Despite Stenhouse’s struggles during his first two years in Cup, he appears to have sponsorship locked up at Roush Fenway for 2015. Zest will return as a primary sponsor and Fastenal has decided to stick with the organization despite Edwards’s departure. They will cover some races for Stenhouse, while the promotion of best friend Trevor Bayne might improve RFR chemistry.

But even with financial support, it is clearly a make-or-break year for Stenhouse and Kelley. Kelley is on NASCAR probation through June after being penalized at Homestead-Miami, and Stenhouse might as well be on it himself. Another finish outside the top 25 in points and this driver’s Cup career will be over.