If not for a badly-timed tire problem for Jamie McMurray, Martin Truex Jr. wouldn’t be getting my shoutout — because he’d have won the race. Instead, Truex had to settle for fourth after a wild restart. Adding insult to injury, Truex, who has flown under the media’s radar all year long despite being a fixture in the top 10 in points, garnered relatively little television attention compared with the night’s other race leaders.

It’s been years since NASCAR’s enjoyed a real run for Rookie of the Year. 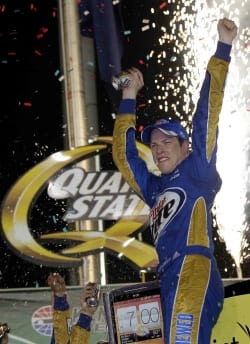 While Clint Bowyer was holding off all comers for the win, his Michael Waltrip Racing teammates were having a strong race of their own, solidly in the top 10. Although Martin Truex Jr. got caught in a late-race traffic jam that forced him off the road and into 22nd place after leading 15 laps early on, it was Brian Vickers who really shined in just his third Cup race of 2012. Vickers drove his way through the field from a 21st-place starting spot, inserting himself into the top 10 and then the top five, muscling past Jimmie Johnson in the late laps to take home a fourth-place finish.

Might Kurt Busch’s slight towards The Sporting News’s Bob Pockrass end up landing the No. 51 Phoenix Racing team a sponsor after all? The Jerry Springer Show has expressed an interest in sponsoring the team and driver who’s turbulent tenure in James Finch’s machine nearly saw him committing career suicide for the second time in …

Joey Logano is still so damn young! But you know, that final maneuver on Mark Martin Sunday afternoon was no rookie deal. It takes a focused, hungry racer who will see a veteran stumble and chose that moment to push–push the one who slipped and push his car right on by and into Pocono’s victory … 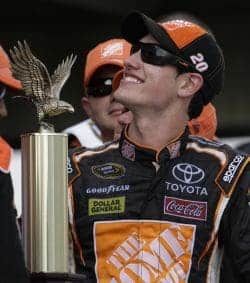 With under four laps to go, race leader Mark Martin bobbled just enough that second place Joey Logano was able to execute a perfect bump and run to retake the lead.

For the first time in 2012, the man who started on the pole was able to seal the deal and take the car to victory lane. Joey Logano ended the day right where he started. His car was fast during the early going; then as pit strategy and many miles began to change things, the No. 20 faded just a bit as Dale Earnhardt Jr. dominated much of the middle of the event. But when it counted, Logano was able to stay out on a late caution while Earnhardt and others were forced to pit for fuel. Martin looked like he might have a shot, taking the lead on the final restart, but Logano, with a faster car, was able to loosen Martin up just enough to slip by and that was all she wrote as the No. 20 opened a commanding lead en route to the checkers.

If there was a prize for the best firesuit, Joey Logano would have it hands down after sporting a suit styled to look like… well, a suit, complete with jacket and tie. Logano, who was also strong in Sprint Cup practice on Saturday, looked to have the car to beat early, but a two-tire strategy later in the race proved to be the wrong one, and Logano was never able to claw his way back to the front. Instead, he was forced to settle for sixth, but if his early run is any indication, Logano could be looking at a much-needed top 10 in the Cup race.

Instead of the obligatory slew of thanks and general thumping of his own back, Joey Logano avoided eye contact with both the camera and his interviewer as the reality of his Friday night Nationwide win sank in.

After seven months peppered with near misses and a night wrought with fuel mileage drama, car owner Rick Hendrick reached a milestone that only one other team has ever reached: 200 Cup Series wins. Only Petty Enterprises has more (268).

Talk about quiet. Sam Hornish Jr. is quiet off the track, and on Friday night, he slipped under the radar until the end. But that’s where the quiet ended, as Hornish waged a furious battle with Austin Dillon for a fourth-place finish, beating Dillon by inches at the line. Hornish is showing steady improvement after being given a chance to start over in the Nationwide Series after a less-than-stellar couple of years in a Sprint Cup car. If he continues to race like he did on Friday, he’ll have another chance in Cup… and this time he’ll be ready.