*Sonoma had a bit of a surprise ending, with Kurt Busch and Tony Stewart left to settle second place behind a dominant Clint Bowyer. Does Busch’s rousing run mean that Phoenix Racing can contend for wins on a regular basis — and did Sonoma change the Chase picture at all?*

Phil: Well, Kurt Busch finally had a weekend where nothing stupid happened. Also, Sonoma is the kind of place where you can overcome a dodgy car and really show off your personal skills. This is just one more display of just how good Kurt Busch can be.
Amy: I don’t think Phoenix is a contender on the intermediate ovals yet. Watkins Glen or a plate track, though, yes, they could certainly be in it.

*Dale Earnhardt, Jr. won for the first time in four years on Sunday. The last time he did so, in 2008 he was also in the top 5 in the points standings… only to tank and finish dead last in this season’s Chase. What does Earnhardt and team have to do differently this time around in order not to repeat the same mistakes?*

Mike N.: Finish better.
Kevin: Keep the consistency they’ve had this year and win some more races, for sure.
Amy: I think it’s what they _are_ doing that’s different. They’re communicating. Instead of shutting down when the car isn’t right, they’re working through it.

*The big story for many teams at Pocono was the record 22 pit road speeding penalties handed out. Was it a case of that many drivers being impatient — or does NASCAR need to look deeper at the issue before they return in August?*

Mike N.: I’m sure there was some kind of issue with the spacing of the lines in the last segment. That said, the teams are given a five mph cushion. They should be able to make that work.
Phil: I don’t know, Mike. So many of the penalties were right at the end of pit road, even after strategy changes were made.

*NASCAR handed down a 10-day suspension to driver Kurt Busch on Monday, after Busch violated a section of the NASCAR rulebook while on probation for an incident at Darlington. Was NASCAR’s decision the right one, and will this punishment ultimately bring about a change to Busch’s behavior?*

Phil: Well, I suppose we now know that probation isn’t useless. In the past, it was always regarded as “toothless,” a slap on the wrist.
Kevin: Yes, definitely the right decision. In fact, I kind of see it as a “last straw” type of move. They’ve tried probation, and it didn’t work. Now, it’s a suspension. If this punishment doesn’t work either, there could be some really serious consequences. 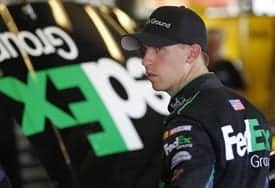 *After the fastest Coca-Cola 600 on record, runner-up Denny Hamlin and third-place finisher Kyle Busch said that they believed the lack of cautions is due mainly to drivers having learned the limits of the new cars, along with their fellow drivers competing within those limits. Is this assessment a fair one?*

Phil: Sure, it’s fair. I believe Ryan Newman said something very similar on Thursday. Honestly, that’s not exactly a bad thing.
Kevin: That’s probably a good part of it. Certainly makes some sense.

*The Sprint All-Star Race featured a new format for 2012, which gave an advantage for the final 10 laps to the winners of each segment. Was the new format a keeper, and if not, what changes should be made?*

Mike N.: I think they need to require a tire change on the pit stop. Other than that, I enjoyed it.
Vito: Judging by the last segment, it didn’t work as planned.

*For the second year in a row, the race at Darlington featured a post-race pit road incident, this time between Kurt Busch and members of Ryan Newman’s pit crew. Last year saw two drivers get monetary fines and probation… this year, we saw more of the same. Is that type of penalty sufficient, or is it time for NASCAR to ramp up the consequences if they aren’t getting the point across?*

Phil: That whole thing is looney tunes. Simple as that.
Amy: I think they should up the fines significantly, like they did with Kurt. Face it, the $25,000 Harvick and Kyle Busch got last year was pocket change.

*After a season-high number of engine failures at Talladega, is it time for NASCAR to make some rules changes … or is keeping the tandem drafting at bay more important than the individual teams affected by the rule?*

Mike: I think they need to look at a minor change with the pressure release valve, just because some cars were overheating in the pack. When drivers can’t race their cars because they are overheating with the grill opening mandated by the rules, there is a problem.
Beth: Why not tweak the rules again? I mean there are drivers suffering engine failures thanks to the rule, and it was _still_ the two-car tandem that won the race.

*By now, everyone knows about the black flag that cost Carl Edwards a shot at the win on Saturday night. Was NASCAR’s call correct… and can anything be done to keep the same thing from happening again?*

Jesse: It was a judgment call that didn’t need such a knee-jerk reaction. I really don’t think Edwards should’ve been black-flagged. They should’ve taken a minute to look at the tape.
Phil: Well, there appears to have been confusion as to who was where. They probably should have taken another lap just to get everything squared away.

*The last two races, at Texas and Kansas, have run without a single multi-car incident, and there have been complaints about the quality of racing in both. Even Martinsville and Bristol saw fewer dustups than fans are accustomed to. What accounts for the lack of full-contact racing, anyway?*

Beth: Simple answer: points. Everyone is so concerned about making the Chase and winning a championship that they’re terrified to screw up and cost themselves.
Amy: Well, we talked about drivers points racing, but I don’t think that’s all of it.

*Texas, besides a late-race pass for the lead was regarded by many as boring – a label that’s been applied to many intermediate track races over the last few seasons. Is it the cars, the track size, the drivers… or a combination of all three that’s causing the word “snoozer” to be thrown around on these 1.5-mile ovals?*

Kevin: It may not even be any of those. The TV coverage always seems to leave something to be desired.
Amy: I think it’s the tracks more than anything else. They weren’t more exciting with the old car, though it is disappointing that the car is still too aero dependent to race well on them. TV coverage is part of it, but not all.

*While Dale Earnhardt, Jr.’s winless streak is one of the longest and most talked about in NASCAR, several drivers are in the midst of a drought. Among them: Carl Edwards, Greg Biffle, Juan Montoya, Mark Martin, Jeff Burton, and Martin Truex, Jr. Which slumping driver is likely to break through to Victory Lane first… and how soon?*

Kevin: I’d go with Biffle or Edwards, with the way Roush has been running this year. And in terms of how soon… I could see it happening _very_ soon. Maybe even this weekend at Texas.
Phil: As far as Edwards is concerned, it doesn’t even feel like it’s been a year since he’s won. He’s always up there contending for a victory, and just slides inside the top 5 instead. He’ll score one at some point.