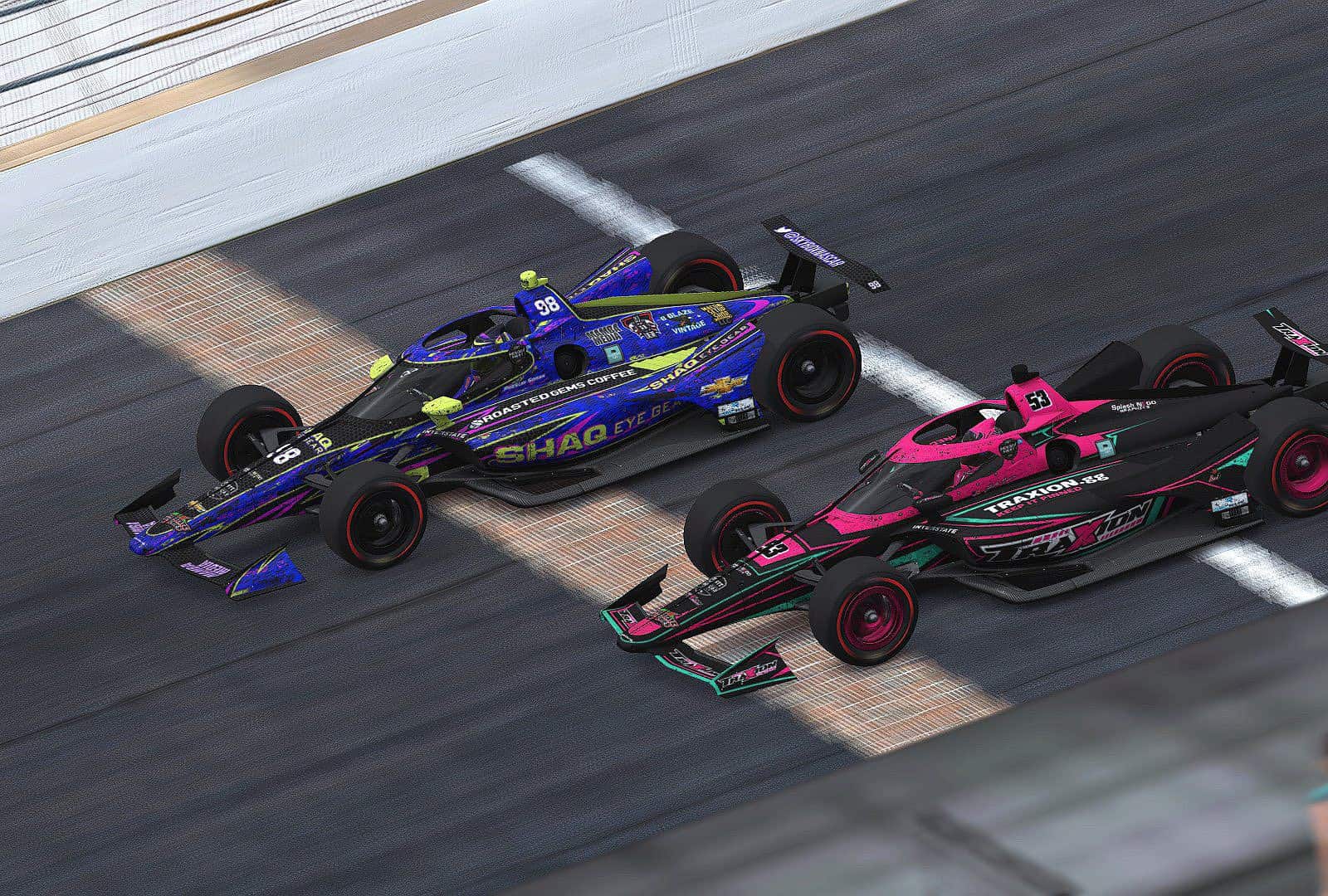 On Monday, Dec. 5, the Interstate Batteries Monday Night Racing Pro Series ran the fifth race of season six with IndyCars in the Next Level Racing 125 at Indianapolis Motor Speedway. Presley Sorah, the defending champion from season five, clinched the race win and a playoff spot after driving from the back following a restart violation and then outdueling Justin Melillo in the closing laps.

Check out the race recap from Frontstretch’s Joy Tomlinson here. Also, you can view the full race broadcast, along with the Frontstretch post-race show featuring Brandon Hauff and Michael Massie, on the Frontstretch YouTube channel. Here are the five key takeaways from Monday’s raucous race:

@MonNightRacing WINNER! Don’t mess with the hometown kid! First win of Season 6 and new points leader! So stoked. Stay tuned to my twitter tomorrow, the Indy winner has to have his milk celebration… 👀. Thank you @justinmelillo for being such a class act and racing me clean. https://t.co/Xc7znHkAJU pic.twitter.com/bZEnadhEkV

When the green flag flew at the virtual Brickyard, it looked like Sorah was in the catbird seat, having won the Roasted Gems Coffee pole and gotten out to the lead when the yellow flag flew for an opening lap wreck. However, as the field went around under caution, MNR race control Josh Mendoza ruled that Sorah had a committed a penalty on the initial start and would be forced to restart at the back of the pack.

Sorah made little progress back up the grid during the first half of the race, running in the 20s and 30s in the field. It looked as though he might have been out of the hunt, but as Sorah revealed in his post-race interview, it may have all been part of the plan.

“I was just trying to save tires, save fuel and really just save my racecar,” Sorah said to Podium’s Blake McCandless and Jacob Hitz. “I was just slowly but surely picking guys off one by one.”

Then, as the cautions piled up, attrition began to kick in, and Sorah made his way back into the top 10. Then, he cracked the top five in time for the final restart with 27 laps to go, passed for second at 14 laps to go and closed the gap to duel with Melillo. Sorah took the lead for good when Melillo hit the wall off of turn 2 with only five laps left, completing his journey back to the top spot.

“This is awesome,” Sorah said. “I’ve been saying since the schedule came out that I am going to win this race, and I lived up to that.”

This was a special win for Sorah, not only because of the chance to defend his championship, but because he is an Indiana native. As part of his celebration, Sorah carried on the Indianapolis 500 tradition of the winner drinking milk and then dumped some on his head. It was a special shower for the Hoosier State resident.

I am a man of my word. @rebilasphoto challenged the @MonNightRacing drivers last night with the task of dumping milk on our head if we won the race, and well… I won. I told him I’d do it, and I said it again last night in the @Frontstretch post race show. Enjoy this. https://t.co/GK0TUgIi3B pic.twitter.com/qiFfvOdyJM

Melillo came into the Next Level Racing 125 outside of the top 20 in points and likely needing a win to sneak into the playoffs. He almost pulled it off, utilizing pit strategy and timely cautions to make his way to the front.

The No. 53 driver first inherited the lead on lap 61 when a caution came out just a couple of laps after he pitted for tires and fuel. He would then pit for the final time with 31 laps to go, likely needing a caution to save some fuel to make it to the end. The next lap, Melillo got the yellow he needed, and he cycled back to the top spot while the leaders pitted.

Melillo set sail on the restart and got drafting help from cars on the tail end of the lead lap, including Ronnie Osmer in the No. 55 and Rajah Caruth in the No. 13. Thanks to the draft, Melillo opened up about a two-second lead, but the turning point came when Caruth spun in front of him with 13 laps to go.

“The lapped car in front of me lost control, and it cost me three seconds to the field,” Melillo told Podium. “If that didn’t happen, I might have been able to hold on.”

While Melillo was able to dodge Caruth, he lost his drafting help. This put him in a battle for the win with Sorah — a battle that he ultimately lost, but not for a lack of effort.

“Yeah, that was some of the most incredible racing that I’ve had in this game,” Melillo said of his duel with Sorah. “We were, both of us, putting it all on the line.”

There's not enough characters in a tweet to say what I want to say. So I'll say good win @PresleyRacing, that was some of the best racing I've ever been a part of. I wish I wasn't put in a position to have fallen back to you. Led the most laps tonight. Thought we scammed one. P9. pic.twitter.com/LnvNi6f0wN

Melillo’s quest for his first career MNR win continues, as he has the most runner-up finishes of any MNR driver without a win. Despite that, Melillo was optimistic after the checkered flag.

“You know what, it’s my best finish of the season,” Melillo said. “I got to look at the positives.”

The combination of the IndyCars and the 2.5-mile Indianapolis produced a messy race at times with 10 cautions. Many of the drivers of MNR do not have much experience with the more aero-sensitive open wheel cars. This was only the 10th race in the IndyCars since MNR started back in 2020, and the first since the opening race of the Round of 10 in season five at Auto Club Speedway.

The opening lap set the tone for what was to come. A massive mid-pack wreck involving previous season six winners David Schildhouse and Corey Heim, among several others, forced many drivers to use their lone fast repair right at the outset. That caution was the first of six yellow flags in the opening 41 laps out of 125 that made up the event. Third-place finisher Matt Stallknecht commented afterward on the rough, chaotic racing in the opening laps.

“I was more lucky than good for the first half of that race,” Stallknecht said. “The back of the field is just mayhem every week.”

The early carnage convinced Mendoza to switch the field to single-file restarts for the remainder of the race on lap 44. The decision helped lead to more green flag racing, with only four cautions for the final 84 circuits around the Brickyard.

Even with fewer yellow flags, there was still a fair share of incidents and single-car spins in the race’s second half that did not bring out a caution, most notably Caruth’s spin in front of the leaders with 13 laps left. When all was said and done, only 17 cars finished on the lead lap and almost half the field was not running at the finish.

While the IndyCars will not come back this season, they will likely be a mainstay on MNR schedules going forward, and there are other unique car and track combinations to come in season six. It shows how important it is to be a versatile driver in order to be successful in MNR.

4) Anthony Alfredo & Others Behind the Eight Ball

While Sorah soaked in the thrill of victory, NASCAR and MNR regular Anthony Alfredo was feeling the agony of defeat. For the second week in a row, Alfredo found himself unable to race due to iRacing connectivity issues. This is a shocking and frustrating turn of events for a member of last season’s Championship 4.

Alfredo will now need a win to return to the MNR playoffs. Here’s hoping Fast Pasta finds a solution to his technical difficulties.

Has anyone had this happen where the sim gets stuck loading? Earlier I could get in the session, but would drop out every time I connected. Now, I can’t even get past the loading screen. pic.twitter.com/s0Iy8Q4rHP

Alfredo is not the only MNR standout struggling with only three regular season races left. James Bickford, another member of season five’s Championship 4, finds himself still winless in season six and hanging on precariously to the final playoff spot, just three points ahead of Will Rodgers.

Fellow season five playoff drivers Gary Sexton, Max Kennon and Nick Olsen are currently nowhere to be found in the playoff bubble picture. George Balfanz Jr. is struggling to crack the top 35 to automatically qualify for the race each week after not being able to race a few times this year.

Will these prominent MNR drivers be able to regain their previous form and make a playoff push?

5) Look Ahead: Next Gen Cars at Canadian Tire Motorsports Park

Next Monday’s race features the NASCAR Cup Series Next Gen car at Canadian Tire Motorsports Park, a car and track combination that has never been seen in real life before.

NASCAR has not returned to the 10-turn, 2.459-mile road course since the Craftsman Truck Series ran there once a year from 2013-19. In that seven-race stint, Mosports produced some memorable finishes, such as Chase Elliott bumping Ty Dillon out of the way in 2013, John Hunter Nemecheck and Cole Custer rubbing and racing to the line in 2016,and the Kyle Busch Motorsports trucks wrecking to part the seas for Justin Haley to take the win in 2018.

All three of those finishes have one thing in common: it came down to the final turn — turn 10 — on the final lap. My guess is that we will see a similar finish on Monday. I expect drivers that did well at the Daytona International Speedway road course a couple of weeks ago to excel at Mosport as well.

The race will be streamed live at Twitch.tv/PodiumeSports and on Frontstretch’s YouTube channel starting on 8 p.m. ET on Monday, Dec. 12.