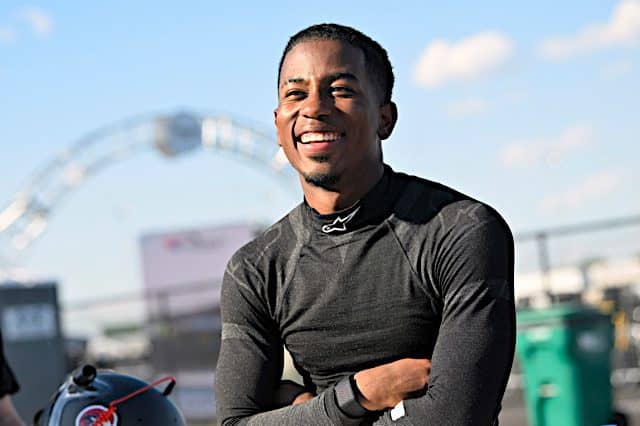 Rajah Caruth will jump from the ARCA Menards Series to the NASCAR Craftsman Truck Series in 2023, GMS Racing announced Dec. 6.

Caruth will drive GMS’ No. 24 full time in the series.

“I am extremely honored, and really excited to join GMS Racing and be in the fold of a professional race team with so much history,” Caruth said in a team release. “I’ve been waiting for an opportunity like this throughout my whole career, and I’m going to do the best in my power to make the most of it.”

The Wendell Scott Foundation will serve as Caruth’s primary sponsor.

“We are truly excited to welcome Rajah to our team next year,” GMS president Mike Beam added. “I’ve studied up on him ever since I saw him racing in ARCA, but I know that he’s been on the radar for many people in the industry for quite some time now. It was fun to watch him and Daniel [Dye] fight for the championship last year, and I think having both of them make the jump up to the Truck Series will be a benefit, because they will both be able to learn together.

“Rajah’s a sharp kid; I’ve seen his work ethic and attention to detail he brings to the racetrack, and I can tell that he’s hungry. He just started driving a few years ago, so to see how far he’s been able to grow in such a short amount of time has been pretty remarkable. He’s built himself a good name in the garage area and is someone that people like to be around, so he’ll be able to soak up some mentorship lessons from experienced drivers, which should go a long way. I’m excited for him.”

Caruth joins Grant Enfinger and Daniel Dye at the organization in 2023.

Caruth made four Truck starts in 2022, all for Spire Motorsports, with a best finish of 11th at World Wide Technology Raceway at Gateway in his debut.

This is an excellent move. Let’s see how he progresses