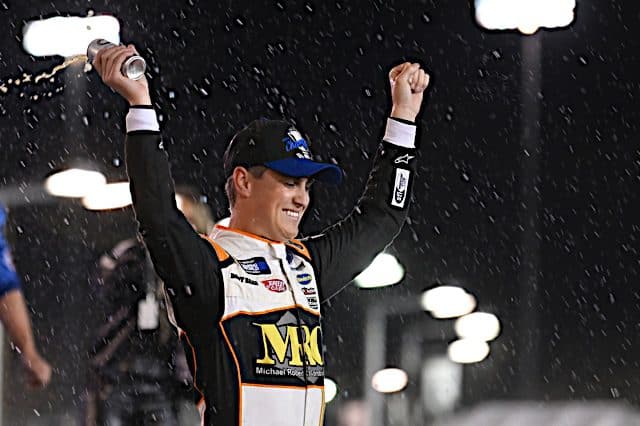 The 2022 NASCAR Camping World Truck Series was filled with intriguing storylines. Camping World ended its sponsorship of the series following the season, closing the book on a 14-year partnership. But it wasn’t the only long-term partnership to end. Kyle Busch Motorsports jumped ship from Toyota to Chevrolet when the checkered flag flew at Phoenix Raceway, as its owner, Kyle Busch, signed with Chevrolet-backed Richard Childress Racing in the NASCAR Cup Series for 2023, in what is perhaps the biggest Silly Season move in the past several seasons.

In the midst of the goodbyes that close this chapter of the Truck Series, let’s give out some awards for the 2022 season.

Team of the Year

It’s hard to really go against KBM in any season, but Front Row Motorsports, despite having a mid-to-back of the pack Cup Series team, has now asserted itself as a contending Truck team.

This should be no surprise with a driver like Zane Smith behind the wheel, but with a four-win season and only two finishes outside of the top 20 in 2022 (one of which was a disqualification from second place), the little team that could took down the big dogs at KBM and ThorSport Racing to claim its first driver and owner championships.

With Smith returning to defend his title in 2023, FRM can only go up from here.

After bouncing between two different teams in 2021 (ThorSport and CR7 Motorsports), Grant Enfinger found his home at GMS Racing this season.

It took a while for Enfinger to mesh with the team, finishing the first three races outside of the top 10, but he began to stay in the playoff hunt by reeling off several top fives and top 10s.

After making the playoffs as one of the only drivers without a win, Enfinger showed up at the right time, winning the first race of the playoffs at Lucas Oil Indianapolis Raceway Park.

Despite not making the Championship 4, Enfinger still managed to finish seventh in the final standings, four spots above where he finished in 2021.

An honorable mention should be given to Chandler Smith, whose No. 18 team found great success at the right time, improving from two wins in 2021 to three, with two of them coming right as the playoffs began. These wins, as well as incredible consistency, elevated Smith to the championship favorite. He was in contention at the end of the Phoenix race, but it was the other Smith (Zane) who prevailed as champion.

But the championship result doesn’t take away from the huge improvement out of the 20-year-old KBM driver, who moves to Kaulig Racing in the NASCAR Xfinity Series in 2023.

What happened to John Hunter Nemechek?

Sure, he finished fifth in points, which in the long run isn’t a bad effort for the No. 4 team. But it doesn’t look great when 2021 was arguably the best NASCAR season of Nemechek’s career – a season that contained five wins, a regular-season championship and a more-than-favorable chance to win the championship before some bad luck at Phoenix relegated him to third in the final standings.

2022 was a completely different story.

Nemechek never really showed the speed needed to assert himself as a championship contender like he did in 2021, and despite a solid points finish, it was not the season that the No. 4 team wanted to follow the 2021 season.

Small-team wins are some of the most well-received in racing history. When a fan-favorite driver is behind the wheel, it makes the win all that much more popular.

Parker Kligerman and Henderson Motorsports made that possible at Mid-Ohio Sports Car Course, holding off a hard-charging Zane Smith to win.

Kligerman and crew had dominated the whole race, leading 56 of the 67 laps and winning stage one in addition to the race. It was the team’s second win in the Truck Series (Kligerman got its first at Talladega Superspeedway in 2017), and Kligerman did his signature plant of the checkered flag after winning.

While Kligerman will be moving on to drive full-time for Big Machine Racing Team in the Xfinity Series in 2023, he plans to continue to drive part time for Henderson in 2023.

The No. 1 priority in NASCAR is safety, yet somehow some within the garage lose sight of that. And it’s especially bad when that happens at one of NASCAR’s fastest tracks.

During the playoff race at Talladega, Hailie Deegan came in with a slew of other trucks for what should have been a routine green-flag pit stop with 31 laps to go.

Her stop could not have gone any worse.

Deegan’s pit stall was the very first one, so she pulled out of line earlier than most to get the best entry into her pit stall. However, she merged left way too late and sailed into her pit box too fast, hitting a few of her crew members and knocking a tire out of the carrier’s hands and into the pit lane. Every driver behind Deegan was able to avoid the tire, sending it into the infield.

If that wasn’t bad enough, one of Deegan’s crew members ran out into the middle of the infield during the green-flag run to retrieve the tire, forcing NASCAR to throw the yellow.

NASCAR has pulled the hard card of the Hailie Deegan team member that ran out into the tri-oval to fetch this tire.

They have escorted him off property. #NASCAR https://t.co/pcdVyEQWKv

A few laps later, NASCAR went down into the No. 1 team’s stall, yanked the crew member’s hard card and proceeded to escort him out of the track for his actions.

Did we not learn from this the first time it happened? This was a foolish mistake by the crew member, who should be experienced enough to know better than to do what he did.

Paint Scheme of the Year

Choosing a paint scheme of the year for any series is always difficult, but for the Truck Series, when some teams have one sponsor for the whole season, it can be especially difficult to pick a favorite.

With that in mind, it’s not surprising that the paint scheme of the year is courtesy of a one-off by a Cup driver.

Joey Logano ran the Pinty’s Dirt Race at the Bristol Motor Speedway dirt track in the Truck Series to get a little more experience before the Cup race the next day. With him he brought a personal sponsor in Planet Fitness, which reigned supreme as Logano’s No. 54 Ford shone in the Tennessee sun. It especially looked good out front, as it was when Logano won the pole for the race.

By virtue of his finishing position and passing points, @joeylogano earns the #CometicGasket Pole for tonight's race on the @BMSupdates dirt! pic.twitter.com/TtNOAT4Ya5

The combination of purple with yellow trim really made the truck stand out against the dirt that covered the half-mile track.

They pull the guy’s hard card for retrieving a tire after the pits stops were completed and throw a yellow ? I would suggest that, regardless of who the driver was, their action was the safety issue: not the guy who got the tire back. There is no reason to slap anybody for a safety related issue. Natural selection will weed out the careless as it has done throughout the sport’s history.