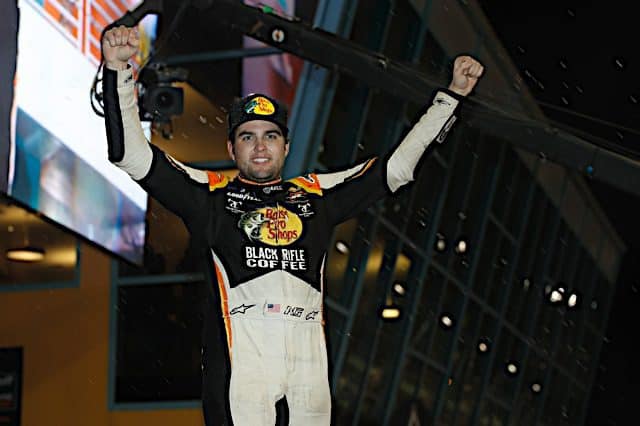 Editor’s Note: This article on the NASCAR Xfinity Series Championship 4, along with updated odds, is posted in collaboration with an outside sponsorship client. The opinions and information contained within do not necessarily represent Frontstretch and its staff.

Drivers for the 2022 NASCAR Xfinity Series championship finale at Phoenix Race are confirmed, as the playoff field was sliced in two during the season’s penultimate race at Martinsville Speedway.

The NASCAR Xfinity Series is winding down as we reach the end of the 2022 season. However, the excitement and drama following the most recent battle at Martinsville Speedway have kept fans eagerly anticipating the final and most significant race of the year in Phoenix on Saturday, Nov. 5.

During the 2022 Dead on Tools 250 race in Virginia, Ty Gibbs was unforgiving as he delivered a race-winning move that would ultimately shatter the hopes of his Joe Gibbs Racing teammate Brandon Jones.

During the final lap of a NASCAR overtime finish, Gibbs made contact with Jones at such force the No. 54 Toyota went crashing into the outside wall. Gibbs held the lead when NASCAR called the 14th and final caution because of the wreckage.

Gibbs was destined for the Championship 4 Round, having claimed a position in the field at Phoenix Raceway. Still, the intentional contact with the No. 54 Toyota cost Jones an opportunity to race for the title at Phoenix himself.

As the Virginia fan base showered Gibbs with boos, he didn’t sympathize with the actions that ultimately gifted him his sixth win of the season.

“It was definitely not a clean move, for sure,” Gibbs commented. “I definitely didn’t want to wreck him, but I definitely wanted to move him out of the groove so I could go win. I felt like we lost the spring race getting moved by him.

“He’s my teammate, but definitely want to get the win here. It’s important to get the win. And now we’re going to the championship. It’s cool. Hopefully, I don’t get hit by any cans or anything right here.

“We got moved out the way earlier this year, so it’s part of it.”

Jones led for 98 laps and won the pole but finished 23rd following the collision.

“I know Ty enough to where I know he doesn’t care about what he did,” Jones said. “He’s pretty much, well – he wasn’t ‘pretty much’ – he was locked into the next round. So really, what did that do?

“I don’t really understand the move. I understand trying to get aggressive – you want to win the race. But to just destroy the race car, I don’t see it. I don’t get any satisfaction from it. Maybe he does. Maybe he lies to win that way? But I never have and never felt strong about racing that way. So, we’ll just take it and go for it.”

Gibbs’ conniving move allowed Justin Allgaier into the final Championship 4 berth. Jones needed to win the race to take his place, but Allgaier was looking to advance on points, which he did.

Gibbs and Allgaier will now compete for the series championship at Phoenix alongside Josh Berry and Noah Gragson. They had already claimed their Championship 4 placements with respective successes in Las Vegas Motor Speedway and Homestead-Miami Speedway during the Round of 8.

Current odds have Gragson and Allgaier as the NASCAR Xfinity Series Championship betting favorites, priced at +175 and +350, respectively. These prices could very well change at BetMGM Arizona, but there’s no denying that Gragson looks like an excellent wager to become this year’s champion.

Furthermore, you won’t just be betting on Gragson; you’re putting money on his crew chief, Luke Lambert, who has been behind the scenes ensuring the car’s smooth operations. The duo is having so much success that Lambert will move to the Cup Series in 2023 to continue as crew chief for Gragson at Petty GMS Motorsports.

However, before their departure, JRM, Gragson, and Lambert have one huge goal to accomplish together: win the Xfinity Series championship. It would be the perfect ending for a team that’s arguably been the most successful in the series this year.

Gragson has won eight races this season, as well as collecting 20 top-five finishes with an average finish of 8.3.