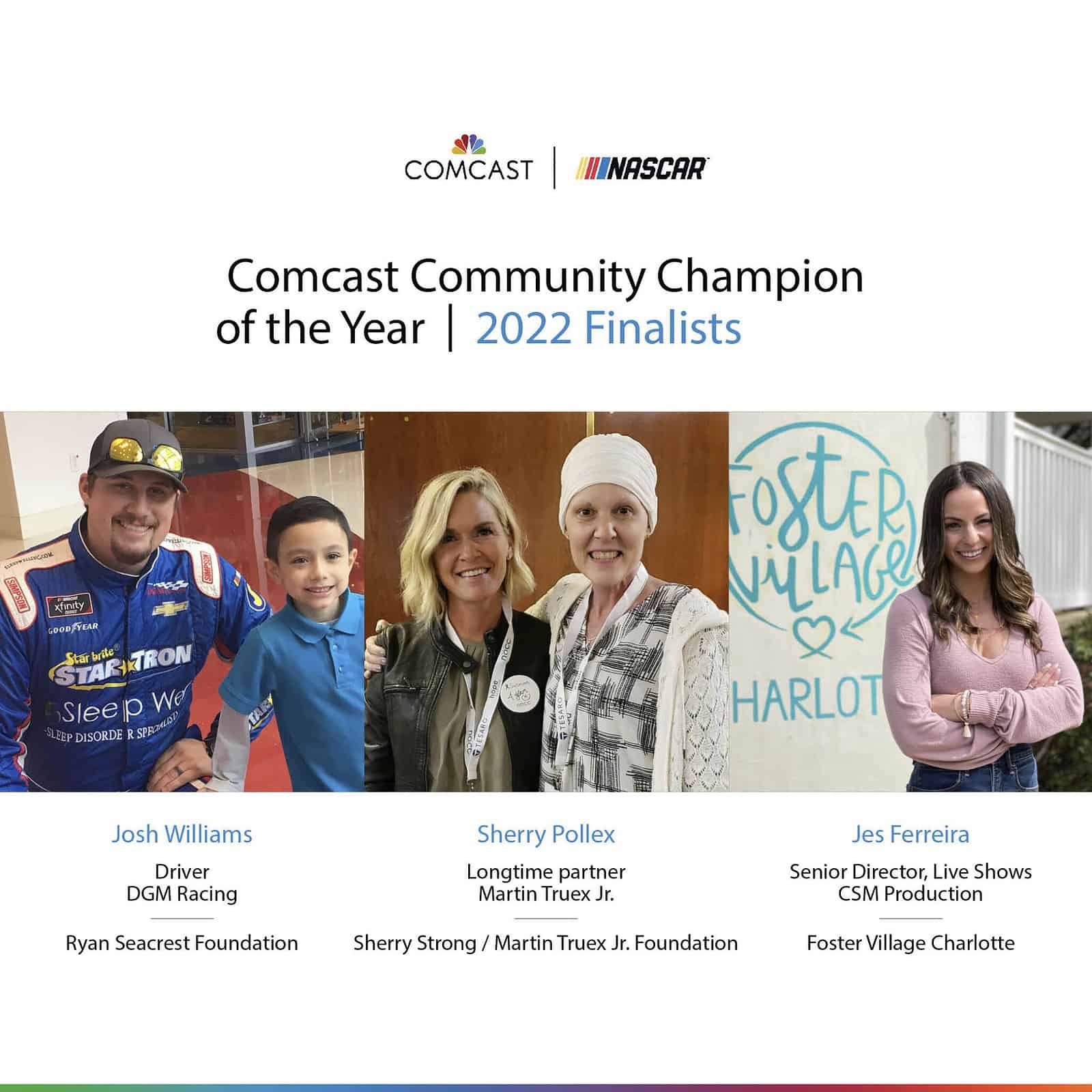 “We are honored to be able to recognize these three champions within the sport who do so much good for the world each and every day,” Matt Lederer, Comcast’s vice president of branded partnerships, said in a statement. “Josh, Sherry and Jes have all made a significant impact on their communities in their own unique ways, and Comcast is proud to be able to celebrate their efforts.”

Nominations for the 2022 Comcast Community Champion opened in May. Many entries have been pitched, as Comcast opened the eligibility for anyone in the NASCAR community with a 2022 annual credential or NASCAR full season license.

Williams has visited more than 150 children’s hospitals to show support. When the pandemic began nearly three years ago, he also began visiting hospitals virtually. Beginning last fall at Phoenix Raceway, he enlisted the help of OhmniLabs to use their Telepresence robots which allowed him to give children a virtual at-track garage tour. His efforts have helped form a partnership with the Ryan Seacrest Foundation, which builds closed circuit TV and radio studios in children’s hospitals throughout the country. In the final race of each season, Williams runs a special paint scheme that has painted handprints of a multitude of children wrapped on his car.

With the launch of Sherry Strong in 2016, Pollex wanted to empower women to know their bodies and recognize symptoms of ovarian cancer with a focus on healthy living through holistic and integrative medicine. Sherry Strong is a branch of the Martin Truex Jr. Foundation, originally formed in 2007 to help children with cancer. But when she received her first diagnosis, the mission was refocused to raise awareness, boost advocacy, and generate financial support for underfunded cancer initiatives specific to childhood and ovarian cancers.

Ferreira, senior director of live shows at CSM Production, became a foster parent of two young girls, ages 5 and 8, despite traveling to the racetrack on most weekends. Originally, she had a license to be a foster parent for one child, but when the child’s younger sister needed a new foster home a few months later, she wanted to take on the responsibility of being a foster parent of two. Her affiliated charity is Foster Village Charlotte, an organization that allows foster parents to connect with and support each other.

Comcast and NASCAR executives, along with 2021 champion Curtis Francois (owner of World Wide Technology Raceway), will select this year’s Comcast Community of the Year Champion. Francois received the prestigious award in 2021 for his work with The Raceway Gives Foundation, focusing on STEM education and diversity.

“There are so many incredible stories and people within the NASCAR community,” Francois said. “It is an honor to be able to be included and recognized as a Comcast Community Champion of the Year Award recipient, thanks to Comcast’s commitment, so many people and organizations will have a long-lasting impact.”

Since becoming the entitlement sponsor of the Xfinity Series in 2015, Comcast has donated $840,000 to more than 21 different NASCAR-affiliated organizations to honor their efforts and to help further the impact of their worthy causes.

Sherry pollex is a champion in every sence of the she is champion period.