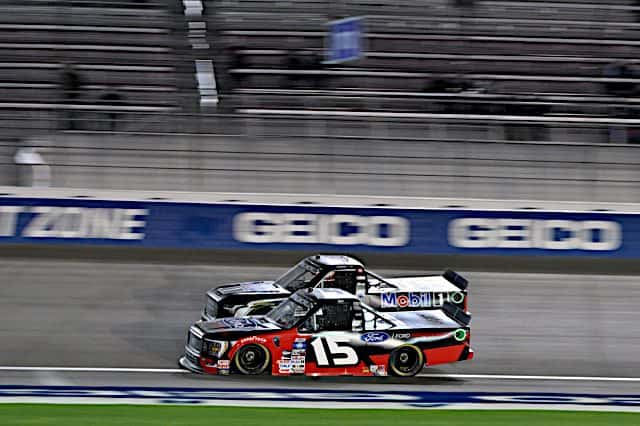 David Gilliland Racing will be known as TRICON Garage in 2023 and will move to Toyota, the team announced Oct. 27.

The team had previously fielded Fords in the NASCAR Camping World Truck Series and the ARCA Menards Series.

For 2023, TRICON will enter three full-time trucks in the NASCAR Craftsman Truck Series. Tanner Gray will remain in the No. 15, while Taylor Gray will compete in the No. 17 full time once he turns 18.

A fourth part-time truck, the No. 1, will also run. The drivers for the No. 1 and for the No. 17 when Taylor Gray cannot run have not yet been announced.

“We are thrilled to return to Toyota and compete in the new Toyota Tundra TRD Pro next season,” team co-owner David Gilliland said in a release. “I’ve seen Toyota’s dedication to the sport firsthand, and we are excited to partner with them going forward. I’m sure this new partnership is going to help TRICON reach our goals of consistently competing for race wins and championships.”

The move leaves Hailie Deegan, the current full-time driver of the No. 1, out of a ride at the organization. Her 2023 plans have not yet been shared.

“Toyota is pleased to rejoin TRICON with this expanded partnership,” David Wilson, president of Toyota Racing Development, said. “We are excited for this new opportunity for our Toyota development drivers and partners to experience TRICON’s success and winning culture. The Truck Series is very important to Toyota, and we know TRICON is going to continue to deliver for us as we begin our 20th season in the series.”

The team also did not disclose its plans for its ARCA organization. The No. 17 has competed in 2022 with Taylor Gray behind the wheel at tracks where he is old enough to compete, as well as the ARCA Menards Series East. It’s also fielded a car Andres Perez de Lara.

Can Hallie Deegan file a lawsuit under violation of TITLE IX?
sarcasm for you serious trolls

Anti American pieces of shit. Gilliland should be taken down.