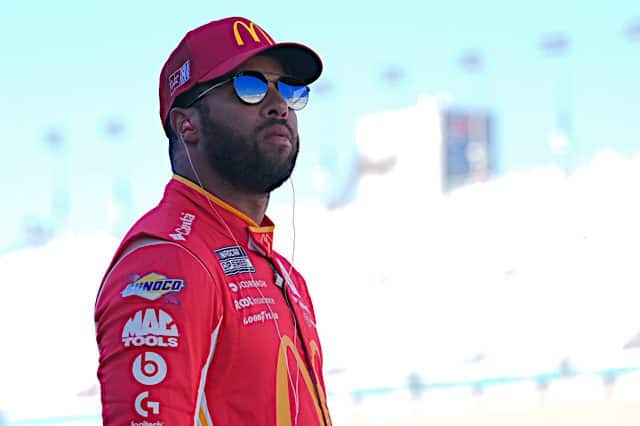 Bubba Wallace has been suspended for the next NASCAR Cup Series event at Homestead-Miami Speedway, NASCAR announced Oct. 18.

23XI Racing has announced John Hunter Nemechek will fill in for him in the No. 45.

Wallace was involved in an incident with Kyle Larson at Las Vegas Motor Speedway Sunday. Larson ran Wallace high off of a turn and Wallace hit the wall. As the pair came down across the racetrack, Wallace tagged Larson’s right rear, sending him spinning and into Christopher Bell, knocking all three cars out of the race.

Wallace apologized for his actions Monday.

Per the penalty report, Wallace violated Sections 4.3.A and 4.4.C and E of the NASCAR Member Code of Conduct. Section 4.4.C refers to a number of actions, including “intentionally wrecking or spinning another vehicle, whether or not that vehicle is removed from Competition as a result.”

“Our actions are specific to what happened on the race track…” NASCAR’s Steve O’Donnell said about the suspension. “It was an intentional act that put other competitors at risk … It was over the line.”

💭 "When we look at this incident, you're not only endangering one, but there's a lot of cars out there at speed…"

“23XI is aligned with NASCAR on the one-race suspension issued to Bubba and we understand the need for the series to take a clear stand on the incidents that took place at Las Vegas Motor Speedway,” 23XI said in a statement. “Bubba’s actions are not in keeping with the values of our team and partners. We have spoken to Bubba and expressed our disapproval of how he handled the situation. Bubba has made impressive strides this season and this experiences is an opportunity for him to further learn and grow as a competitor in NASCAR.”

Additionally, Kyle Busch’s No. 18 team was penalized after a wheel came off during a caution after Busch left pit road. Crew chief Ben Beshore and crew members Derrell Edwards and Michael Hicks are suspended for the next four races, through the Clash at the L.A. Coliseum.

Also, Ty Gibbs’ NASCAR Xfinity Series crew chief Chris Gayle was fined $5,000 for a loose lug nut. Jeremy Clements’ crew chief Mark Setzer will also miss Homestead due to a violation of Section 14.4.B.E. The Flange Fit Composite Body must be used as supplied from the manufacturer without modification. He was also fined $25,000 and the team loses 40 driver and owner points.

Good. An argument could have been made for the rest of the year but at least a message is being sent. I am shocked that NASCAR did what needed to be done despite the optics.
How do you like them apples, Bubba?

I think the penalty is strong enough to get Bubba’s attention. I’m sure his sponsors have had words with the folks at 23XI as well. And his reputation aka his brand took a hit, too.

I think the penalty is strong enough to get Bubba’s attention. I’m sure his sponsors have had words with the folks at 23XI as well. And his reputation aka his brand took a hit, too.

I am kind of surprised we haven’t heard anything from McDonalds. If I recall, Mars was pretty quick to voice their disapproval when Kyle Busch had his meltdown. I guess they don’t have a problem with it.

I hope anger management and a therapist was also dictated. He does seem to have some issues controlling his emotions.

Are you kidding me? Even though I agree with the suspension it’s the time of it. It should have been at least 2 races since Nascar set the precedence back in 2015 with Matt Kennesth for wrecking Joey Loggano at Martinsville, 2 race suspension. And also Kyle Busch in Nov 2011 for wrecking Ron Hornaday, 2 race suspension. I guess since Mike Helton is no longer in charge, nobody has a set of nuggets anymore in NASCAR, Not the NASCAR that Big Bill France Sr and Jr built. How ridiculous!

Jeremy
Reply to  Chris A

Kyle Busch also got an additional $50,000 fine. Both Kenseth and Busch were also put on probation for the rest of the season with Kyle getting another bonus threat of indefinite suspension.

Last edited 3 months ago by Jeremy
5
0

Chris A
Reply to  Jeremy

Jeremy, I absolutely agree with you and remember that. Maybe it’s time for the fans to let Nascar know there were more rules broken than just conduct rule. If you look at the replay Bubba also lays his hands on a Nascar official. That is definitely another rule violation. Seems to me there is a double standard for certain drivers.

I was surprised there was no fine as well. It is rare that any penalty doesn’t include a large fine.

Why didn’t NASCAR include an all-expense paid trip to Hawaii for the week?

Very lame slap on the wrist. Double standards it seems for certain people of privilege. No mention about all the other rules he broke, no punishment. No monetary slap, nothing. The optics are bad. MDW needs anger management classes or needs to see a shrink, imo. MDW seems to have issues with his emotions, imo.

Watching RH and they’re shocked at the “punishment”. Diplomatic as they are, you can tell, not happy. And they are not the only ones!

NA$CAR doesn’t need to fine Blubber. They got a small fortune in free publicity from the incident. Now that the next telecast doesn’t have to show the expected in-car coverage of Blubber trying to hold on to his position in the 20s they can provide updates on the battle for the Owner title, which I must have have missed during the previous telecasts.

Let me see if I got this right. You spin a guy out at 185 mph and get a one race suspension. If Larson did not hit Bells car he would have back into the wall and only God knows what could have happened. Now you have one team lose a tire and they get a four-race suspension for a few of their pit crew. As usual Nascar doesn’t seem to have things right.

So I guess bubba should have just waited and spun Larson out under caution like William Byron did at Texas?

That would have at least been safer, and less likely to collect other cars.

Need to kick him out of Nascar

Joy, I don’t think tagged Larson is the right word at all
Why don’t you call it we all saw, you included. It showed he was definitely on the gas hard as he lined up and then creamed Kyle. Call it like you saw it was, not the correct nascar way. I laughed so hard on bubba’s first attempt to push Kyle, bubba almost fell on his butt. Very weird ruling by nascar again, no fines. Hamlin and MJ are nascar darlings now, that’s why bubba’s car is running better. He didn’t get better.

Boy Jeremy Clements team is really trying to push the envelope there even after that last penalty.