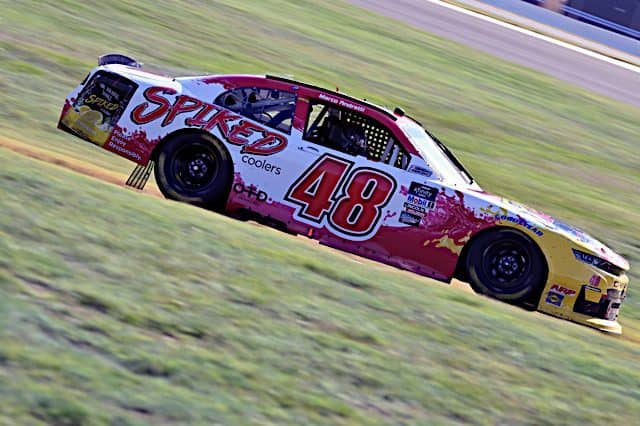 It was a pretty big weekend for the NASCAR world at the Charlotte Motor Speedway ROVAL — and I’m not talking about safety meetings.

Conor Daly, Daniil Kvyat, Mike Rockenfeller, Joey Hand, Loris Hezemans, James Davison and Marco Andretti competed in the NASCAR Cup or Xfinity series — or both — this past weekend at the ROVAL. All come from backgrounds that aren’t originally stock car oriented.

The highlights of these starts were Daly making his Cup debut with The Money Team Racing after making three prior starts between Xfinity and Camping World Truck Series competition. He finished 34th after crashing his car in practice.

Davison returned to Xfinity competition for the first time since 2021’s race at the Indianapolis Motor Speedway road course. He finished fourth in Joe Gibbs Racing’s No. 18 Toyota, tying his best career finish.

Perhaps the biggest debut belonged to Andretti though, who made his first-ever start in NASCAR when he piloted the No. 48 Big Machine Racing Chevrolet. Following a championship in the 2022 SRX Racing season, Andretti qualified 30th and finished 36th following a crash with 22 laps to go. His day was decent and quiet, at least up to the point where he t-boned Jeb Burton’s car.

Many are up in arms about Trackhouse Racing Team’s PROJECT91, and rightfully so. The concept of a team purposefully setting aside resources to attract international and non-NASCAR talent to drive in a one-off or select NASCAR races is genius. But then again, Justin Marks is a pretty smart guy.

That’s just a single team that may run 10 Cup races in 2023. Is there another option? Not specifically, but the NASCAR Xfinity Series is a perfect playground for foreign talent to get their firesuit wet in NASCAR. Why should a driver consider the second-tier series over the premier series? There are a few reasons.

First off, the pressures of the Xfinity Series are far less. It’s not simply the second-tier series; there are fewer eyeballs tuning into the race weekly, plus fewer in the stands. Did Andretti pull more fans into the stands in Saturday’s race as compared to if he wasn’t there? Most likely, yes, but expectations grow with the more eyeballs that are on you.

The second is simply the money associated with Cup racing. The cost to fund a single Cup start is pretty high up there. Add to that the fact that a driver is more than likely going to be piloting a non-chartered car, and therefore the payout is going to be grossly negligible. It takes considerably less money to fund an Xfinity drive.

Let’s flip that coin, because if a drive in the Xfinity Series is cheaper and your dollar goes further, more competitive rides should be available compared to those in Cup. Why not take a theoretical blank check and go to a competitive Xfinity team than a mid-field Cup team?

Andretti did it right. He took an opportunity with Big Machine Racing which has shown speed, and winning speed at that. Tyler Reddick proved in May that BMR could compete and win races.

But Andretti has never raced a stock car (except for SRX), let alone a race at the ROVAL. Racing in the Cup Series in his inaugural foray into NASCAR would have been inadvisable. You could argue Daly shouldn’t have made his Cup debut at a track he’d never seen before, but he’d made three previous NASCAR starts.

It also only benefits the Xfinity field if non-NASCAR and international talent decide to make debuts and continue racing in the series. While PROJECT91 is a fantastic idea with having drivers such as Kimi Raikkonen, Daniel Ricciardo or Helio Castroneves race in Cup, not every driver, with their lack of NASCAR experience, needs to be thrown to the wolves immediately.

Is the proposition of learning how to race a stock car in a lower division that crazy? Even if a driver is an eight-time Formula 1 winner? It’s not dissimilar from rising through a feeder system to the top levels of any sport. I’m not intentionally singling Ricciardo out, but the basic philosophy remains the same with any driver.

Andretti was running a great race, given it was his first time. It’s unlikely that he’ll ever race in the Cup Series full time, but until the day comes he is ready to make that first Cup start, he should cut his teeth in the Xfinity with an upper-to-mid-field team, such as Big Machine Racing or better.

SHR and BMR are regular contenders for a top 10 when the proper driver is behind the wheel. John Hunter Nemechek has nearly wheeled SHR’s Toyota to victory lane a couple of times. Before Reddick announced he would depart Chevrolet after the 2023 season, he routinely put the BMR Chevrolets in winning situations.

If you’re a team owner, given that the correct driver can put your car in victory lane, why wouldn’t you want to be an owner when the next Andretti calls? You don’t answer just because they will win right away. An owner should answer because if they finish top 15 or maybe even top 20, that is a successful day for a driver just learning how to race stock cars.

Maybe Alexander Rossi wants to try NASCAR after watching Daly, his friend and fellow IndyCar competitor, whip it around the ROVAL. What if Ryan Hunter-Reay is inspired following his season in SRX? What if one of IMSA’s Taylor brothers, be it Ricky or Jordan, wants to give stock cars a go?

Dipping their toes into the NASCAR pool via the Xfinity Series should not be overlooked due to the fact that it is the second-tier series. If they have a sponsor with a lot of money, dollar for dollar, that “lot of money” will go further with any team.

They may not end up in a JR Motorsports or Joe Gibbs Racing ride, but the experience behind the wheel of a team such as Sam Hunt Racing, Big Machine Racing or even RSS Racing is going to be a better instrument to learn how to race a stock car than any non-chartered car or small budget team in the Cup Series.

Let’s not undercut the real reason the Xfinity Series exists — to develop talent. No matter how many world championships a driver may have, if they don’t have any experience racing a car similar to a 3,000-pound racecar, they will be rookies and their talents will need to be reshaped.

I don’t see what benefit or incentive (other than curiosity / bucket list item) an Indycar driver would have to go run in NASCAR? Indycar is a better series right now – with competitive teams/drivers putting out a better product on track without all the nonsense. Indy was headed in the right direction, and Roger has done a great job maintaining that momentum. Penske > France.

That said, I was sad to see Marco’s day end early due to a situation outside of his control. Was looking forward to seeing him log all the laps and possibly post a good finish (for a first timer). His debut was the only reason I tuned in to watch any NASCAR product this weekend. I wonder how many others did the same?