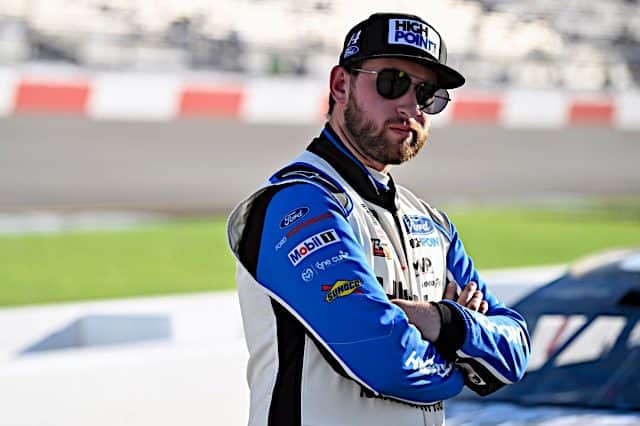 Chase Briscoe is in the Cup Series playoffs for the first time. It is only his second season in NASCAR’s top division. Yet against all odds, his championship hopes are still alive into the Round of 8.

How did a driver who had only four top 10s in 2022 before the postseason began outlast former champions and perennial title contenders in the playoffs? It’s taken a little bit of luck, but Briscoe has helped his case by grinding out quality finishes and making the most of good opportunities in the playoff races.

For most of the year, that wasn’t the case. Despite scoring his first Cup Series win at Phoenix Raceway in March, Briscoe and his team experienced problems putting complete races together. He had a couple near misses at Bristol Motor Speedway on the dirt and in the Coca-Cola 600, two events where he ran down the leader in the closing laps but spun himself out trying to make a last-ditch pass for the win. Briscoe was able to recover in the Coca-Cola 600 to finish fourth, but that would be his last top-10 finish of the regular season.

For weeks afterward, whenever the No. 14 team looked like they could contend for wins, some misfortune would foil its plans. Things got particularly bad late in the last five races of the regular season. Briscoe’s best finish during that stretch was 20th at Michigan International Speedway, and it seemed like he couldn’t escape bad luck even with fast cars.

At Richmond Raceway, Briscoe drove from mid-pack into the top five before a cockpit fire forced him to pit road under green with about 100 laps to go. A week later at Watkins Glen International, Briscoe was lightning fast in the rainy conditions to begin the race, but he suffered a mechanical failure in the second stage from which the team never recovered its track position. Then, Briscoe’s regular season came to an end at Daytona International Speedway in a multi-car crash on lap 125 while racing for the lead.

Every season in the Cup Series, there are always a few drivers who struggle to run well week by week but make the playoffs by virtue of a win. Briscoe had all the makings of being one of those drivers in 2022. By the end of the regular season, he had fallen all the way to 17th in overall points and had gone 12 races without a top-10 finish. The logical assumption was that the No. 14 was heading for a first-round elimination. Getting caught up in a crash in the Southern 500, the first playoff race, only put Briscoe further in the hole.

Yet for the rest of the first round, fortune swung back in Briscoe’s favor. He finally had a drama-free race at Kansas Speedway, then went back to Bristol on the concrete and scored a combined 15 points in the first two stages. A power steering problem prevented Briscoe from ending his top 10 drought, but the combination of stages points earned and avoiding major trouble was enough to get him to the second round of the playoffs.

The next three races would see Briscoe bounce above and below the cut line like a ping pong ball. He struggled for most of the afternoon at Texas Motor Speedway, but a gutsy call by crew chief Johnny Klausmeier to not pit late in the race allowed Briscoe to keep his track position and finish fifth, his first top 10 in 16 races. A week later at Talladega Superspeedway, Briscoe made a few key passes in the last two laps of the race to secure a 10th-place finish. He left Talladega as the bubble driver by virtue of a tie breaker over Austin Cindric, only to fall below the cut line on Thursday (October 6) when William Byron’s 25-point penalty from Texas was rescinded.

Yet all of that was just a teaser for Briscoe’s day at the Charlotte Motor Speedway ROVAL last weekend. Entering the race 12 points below the cut line, Briscoe scored a total of seven points in the first two stages. It was a good effort, but he actually lost ground to Byron and Daniel Suarez, both of whom earned more stage points than the No. 14. Then, Suarez began to experience a steering failure, sending the No. 99 tumbling down the running order. Suarez’s misfortune put Briscoe back above the cut line by a handful of points as the laps ticked away. It looked like Briscoe was safe to advance.

However, the race was not over, and fortunes turned again.

With six laps to go, NASCAR threw a caution for a sponsor’s sign on the racing surface. While several drivers pitted under the following caution, Briscoe stayed out to pick up track position. Cindric stayed out too, tightening up both drivers’ margins to the cut line. On the following restart, Briscoe charged his way into the top 10, only to get spun by Austin Dillon going into the backstretch chicane. More cars spun behind Briscoe, one of which dislodged the metal curbing and forced NASCAR to throw another caution. With the race paused again, Briscoe was now below the cut line by nine points. Just when it looked like he was a shoo-in for the third round, it appeared misfortune would sink the No. 14 again.

But again, the race was not over, and fortunes turned one more time.

With nothing more to lose, Briscoe came to pit road for fresh tires. As the race resumed for an overtime restart, he needed to gain 11 points in two laps to remain in the championship picture. With his season on the line, Briscoe charged through the field. He caught a break when Cindric spun in the backstretch chicane, but the real moment of truth came on the final lap. Approaching the backstretch chicane once more, Briscoe drove deep into the corner at the same time that Cole Custer slammed on the brakes just ahead of him. Whether that was a calculated move by a teammate or a driver struggling on old tires, Custer blocked the progress of Dillon and allowed Briscoe to fly past both of them. At the finish line, Briscoe ended the race two points above the cut line.

The sequence of events that got Briscoe through the second round of the playoffs is absolutely crazy. But that’s racing. Or maybe, that’s the playoffs. For better or worse, NASCAR’s playoff system relies heavily on collecting points, earning good finishes and being lucky at the right time. There has always been an element of chaos to the postseason and drivers who benefit from that chaos.

This year, that’s Briscoe. It is an absolutely fascinating development considering his lack of experience and how unlucky he was during the regular season. Yet no matter how it happened, the record book will show Briscoe in the Round of 8 in 2022.

Thriving my ass. What the hell are you smoking? He backed into making the next round, possibly with rule-bending help from a teammate. At best he got lucky. At worst he stole a berth. Sometimes I wonder if writers get an idea for a story and then manipulate facts and reality to make it work out.

Some people will rationalize ANYTHING they believe to be true! And others will actually believe it too.