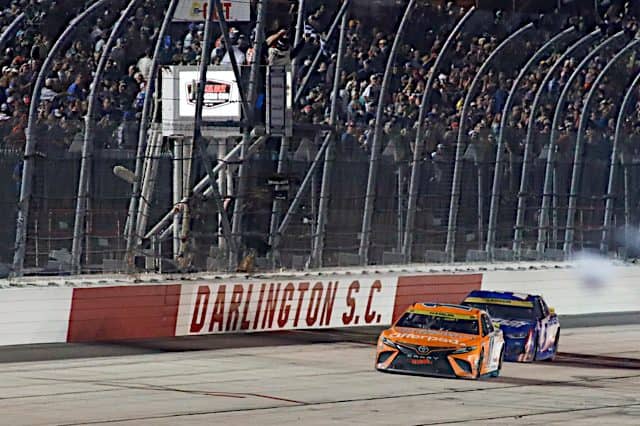 We have arrived. The 2022 NASCAR Cup Series playoffs are here.

It took 26 races, 16 different winners (I was right!), an entirely new car and some flared tempers, but the ninth edition of this elimination-style postseason format is upon us.

The 10-race playoff slate consists of four 1.5-mile venues, uniquely-shaped Darlington Raceway, two short tracks, the one-mile Phoenix Raceway, one road course and one superspeedway (Talladega). There’s plenty of variety to go around and appeal to multiple contenders (along with some non-playoff drivers as well, who could play spoiler).

The combined total of 16 drivers across 10 races means I could theoretically go into 160 stats regarding average finishes at each track, but I promise I won’t do that. Instead, let’s look at the first three races and how these drivers might fare during the first round (with some predictions at the end). Each race section includes the three primary playoff drivers to watch with five statistical points and their rankings among active drivers; if two drivers are close in stats, the one with the better average rank in those statistics gets the nod.

See also
NASCAR Mailbox: Is This the Year of the Playoff Spoiler?

The “Lady in Black” kicks things off in the postseason as the tour heads north to Darlington, S.C. The first date at the track “Too Tough to Tame” this year brought plenty of drama, from a seemingly-dominant Ross Chastain crashing on the backstretch midway through the race to Joey Logano roughing up William Byron late to secure the victory.

Last year featured the two drivers with average finishes better than 10th — Denny Hamlin (7.8) and Kyle Larson (8.9) — fighting all the way to the checkered flag. Larson’s No. 5 wound up scraping the wall and eventually came up short as Hamlin scored his fourth victory at the track. The 2021 fall race triumph made Hamlin the leader in track wins among all active drivers.

Kevin Harvick has three wins, while Kyle Busch and Logano each have one. The other 75% of the playoff field has yet to win a Cup race at the egg-shaped oval while, since the turn of the decade, Hamlin and Harvick each have two victories at Darlington. There’s a number of championship contenders that have average finishes south of 15th, while the rest fall somewhere between 10th and 15th.

Daniel Suarez owns the lowest average finish, a 22.3 through six starts, with teammate Chastain just ahead at 22.2.

With back-to-back wins for Harvick at Michigan International Speedway and Richmond Raceway last month, it’s not out of the realm of possibility to say that the nearly-two-year win drought for the No. 4 gives way to a stellar playoff performance. Harvick’s history at Darlington features 18 top 10s in 29 starts and the most laps led of any active driver there; he won two of the three races in South Carolina in 2020.

Potential playoff spoilers: While it’s incredibly weird that Martin Truex Jr. isn’t in the playoffs for the first time since the format was implemented, he owns two Darlington wins, ranks fourth in laps led among active drivers and has an average finish of 11.5. Former Darlington winner Erik Jones‘ mean result sits at 11.8, fourth in the current field, and Austin Dillon, who snuck into the playoffs last week at Daytona International Speedway, lands a surprising fifth among active drivers in average finish with 11.9.

Harvick and Hamlin once again top the contenders for Kansas, with three wins apiece, but they’re joined atop the stats bar by Logano. The No. 22 also has three victories in the Sunflower State, while Busch has two, Larson one and Chase Elliott one.

Larson and Busch contended for the victory but were foiled by Kurt Busch back in the spring. Elliott owns the second-best average finish on the yellow brick road (11.2) and the 2020 NASCAR Cup champion should contend once again. Brad Keselowski is third at an 11.6, but his No. 6 has rarely been a threat to win all year long.

Lowest among playoff drivers is Chastain, once again separated by teammate Suarez by just one decimal point (22.4 for Chastain and 22.3 for Suarez, respectively).

Potential playoff spoilers: There’s that Truex guy again. He’s previously won at six of the 10 playoff tracks and is still hungry for his first victory of 2022. He also ranks high in multiple statistical categories amongst active drivers at Kansas (including fourth in average finish with a 12.5 mark).

RETWEET to congratulate @KyleLarsonRacin on his win at @KansasSpeedway!

It's the second time this season he's won three races in a row. #NASCARPlayoffs pic.twitter.com/m8KMNtdRcW

The half-mile short track on the Virginia/Tennessee border presents a more difficult challenge, as the two recent races on dirt at the “Last Great Colosseum” need to be entirely discounted; despite Kyle Busch’s win there this spring, dirt experts Tyler Reddick and Chase Briscoe excelled there and the No. 18 stole the win as the two relative newcomers spun in the final corner on the last lap.

Larson is a threat of late, leading 175 circuits last year en route to a win shrouded by the Elliott-Harvick conflict unfolding on track and on pit road. He’s led 200 or more laps in two other Bristol races, placing in the top quarter of playoff drivers in that category.

That said, Busch’s eight wins are far and away the most of any title contender this season and he’s a perennial threat for the trophy at Bristol, though his most recent victory on the paved surface was three and a half seasons ago.

Chastain’s 26.8 average finish is once again the lowest in the field, about five full positions lower than second-lowest Christopher Bell‘s.

See also
2-Headed Monster: Is Joe Gibbs Racing Better Off With or Without Kyle Busch?

Potential playoff spoilers: Superseding Truex as the top dog in terms of non-playoff drivers is Jones, who despite zero wins at the track leads all active drivers with a 12.4 average finish at Bristol. More than half his starts have resulted in top 10s, including leading 260 laps in 2017. The driver of the No. 43 is also on a streak of three straight paved top 10s at the half-mile oval, finishing fifth, third and eighth in spring 2020, fall 2020 and fall 2021, respectively.

It’s getting heated at Bristol between @KevinHarvick and @chaseelliott! 🔥 #NASCARPlayoffs pic.twitter.com/eI3SbuRI8H

Yes, it’s a bit of an early-bird thing to look at all three races in the first round before the playoffs even start; it isn’t even taking into account the chaos that could ensue at any of the three tracks. Darlington has its own brand of hectic action, as there’s been some truly, bizarrely violent wrecks at Kansas the past five years or so (from Aric Almirola to Jones to Ryan Preece) while Bristol’s short track action is its own animal.

The trend seems to be that Harvick, Hamlin and Busch will be the drivers to keep an eye on, with contenders like Logano close behind, while Truex is the main lurker to throw a wrench into the playoffs. But the hell with it! With this year, anything goes and no one knows what’ll happen.

Time for the NASCAR playoffs to begin.