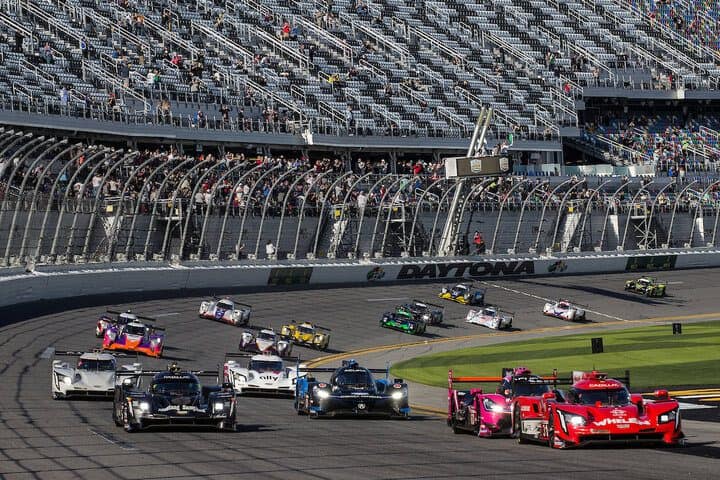 Road America is a big weekend for IMSA. It’s the only sprint weekend of the year in which all five classes of the IMSA WeatherTech SportsCar Championship compete in together. It’s also the weekend in which announcements for the upcoming season are made. IMSA president John Doonan gave the State of the Sport address Friday (Aug. 5) at the Tufte Center on the property at Road America. A series of announcements were made.

Likely the biggest announcement made during the presentation was the announcement of the 2023 IMSA WeatherTech SportsCar Championship schedule. There are 11 rounds on the calendar, down from 12 this year.

The sole addition to the schedule is the Indianapolis Motor Speedway, which was already announced last Friday at a press conference during the joint NASCAR/INDYCAR race weekend. The IMSA Battle On The Bricks will be a 160-minute sprint race for all five classes on Sept. 17. This race will replace Mid-Ohio on the calendar.

In addition, Detroit has been dropped from the calendar. 2022 is the final year for the race at Belle Isle Park. Next year, the event will move back to downtown Detroit for the first time since 1991.

In regards to the class mix at events, six of the 11 rounds (the four Michelin Endurance Cup races, plus Road American and Indianapolis) will have all five classes in action, up from five in 2022. Lime Rock and VIR will remain GT-only events.

The new GTP class will race at nine events, the six with all the classes, plus Long Beach, Laguna Seca and Canadian Tire Motorsport Park.  GTD Pro and GTD will be in action in all 11 races. LMP2 and LMP3 each have seven race seasons including the six with everyone else, plus one extra race. LMP2 teams will be at Laguna Seca, while LMP3 teams will make the trip to CTMP.

In GTD, there will only be one championship in play in 2023. The WeatherTech Sprint Cup, based around the sprint races on the calendar, has been discontinued. There has been a low take rate for the sprint championship this season as really only one team (Rick Ware Racing) has committed to the sprint schedule this year.

There will be no changes in regards to driver eligibility in the classes in 2023, quashing rumors of a potential Bronze driver requirement in the GTD class. That said, Doonan did note that IMSA is continuing to look at additional incentives for Bronze-rated drivers.

In the GTP class, a new fuel from VP Racing Fuels, R80, will be used next year. This is a new formulation made from renewable sources that replaces the current E-20C fuel (20% ethanol unleaded fuel). In addition, to cut down on tire changes, a new tire will be used that will be capable of double stinting. That, combined with increased fuel economy with the new hybrid powerplants will likely mean that there will be only one tire change for GTP cars in sprint races next year and potentially none at Long Beach.

Michelin is currently developing tires that are constructed most of renewable materials, similar to what Firestone is trying to develop for INDYCAR. There is no official timeline at the moment, but IMSA does want to able to race on them at some point in the future.

The IMSA Michelin Pilot Challenge 2023 schedule was also revealed Friday. The series will hold 11 rounds in 2023, but the Grand Sport and TCR classes will each only appear in 10.

Nine of the rounds will feature both classes. These are Daytona, Sebring, Laguna Seca, Watkins Glen, CTMP, Road America, VIR, Indianapolis and Road Atlanta. The TCR class will race alone at Lime Rock in July.

The Grand Sport class will travel to Detroit in June to race on the new Downtown Detroit circuit on the undercard of the Chevrolet Detroit Grand Prix. This will be the first Michelin Pilot Challenge race that will not be on the undercard of a WeatherTech race since Lime Rock in 2014.

Nine of the 11 races will be two hours in length. The season opener in Daytona will remain a four-hour race. The second four-hour race, as announced last Friday, will move from Road America to Indianapolis on the undercard of the IMSA Battle On The Bricks.

IMSA revealed the format and partial schedule for the inaugural VP SportsCar Challenge. This will be a new sprint series for LMP3 and GT4 cars that was announced in July as the replacement for IMSA Prototype Challenge in 2023.

The season for the series will start the weekend of March 12-13 at Sebring International Raceway. This is not during the SuperSebring weekend. Instead, mostly due to space constraints in the paddock, the season opening round will take place during the FIA World Endurance Championship’s Prologue test.

Additional rounds will be held during the WeatherTech race weekends at Laguna Seca, CTMP, VIR and Road Atlanta. There will be a sixth round as well. However, the location of that sixth round is TBD.

VP SportsCar Challenge rounds will be two races of 45 minutes each. No scheduled pit stops will take place. If you’re stopping, you’re probably in trouble.

Doonan also revealed the seven finalists for the 2023 IMSA Diverse Driver Scholarship during the State of the Sport address.  These drivers are vying for a scholarship worth hundreds of thousands of dollars. The full benefits can be found here.

There are four returning nominees. They are Sebastian Carazo, Sabre Cook, Courtney Crone and Kyle Loh.

Cook is an engineer by trade, but has also raced extensively, most recently in the W Series, where she competed in the 2019 and 2021 seasons. She has not raced this year to this point due to a hip injury suffered last season.

Crone is currently racing full-time in IMSA Prototype Challenge for Jr III Motorsports. She is eighth in points with a best finish of fifth at Daytona back in January.

Carazo is currently racing full-time in Lamborghini Super Trofeo North America for Precision Performance Motorsports alongside Bryan Ortiz. The duo are currently second in the Pro-Am class with victories at NOLA Motorsports Park in May and at Watkins Glen International in June.

Loh is currently part of the HPD Drivers Academy, a program run by Honda Performance Development and Racers Edge Motorsports in which up-and-coming racers get their chance to try out an Acura NSX GT3. Drivers who have come through that program in the past include Taylor Hagler and Jacob Abel.

Joining them are three new candidates. Brad Perez comes from the Spec Miata ranks, has worked as a tire specialist in the NASCAR Camping World Truck Series and serves as an instructor at the BMW Performance Center. In addition, Perez has made two starts in the Camping World Truck Series for Reaume Brothers Racing at Circuit of the Americas and Sonoma Raceway, finishing 20th and 22nd, respectively.

Bryson Lew comes to the competition from SRO America. He raced part-time last year for Samantha Tan Racing in Pirelli GT4 America SprintX in a BMW M4 GT4. Prior to that, he competed in TC America’s TC class for Fast Track Racing.

Finally, there is Cameron Parsons, the oldest driver in the group at 34. Parsons has primarily competed in club-level events, but has competed in the Trans-Am West Coast Championship.