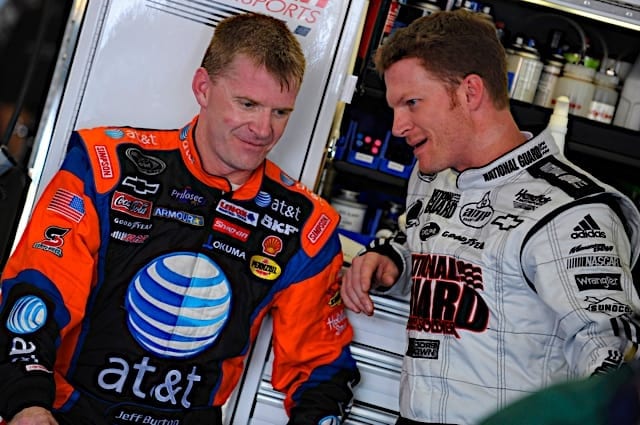 As I’m sure you read three weeks ago, in the year 2000, Jeff Burton led all 300 laps to win the Dura Lube 300 at New Hampshire Motor Speedway.

In a career that saw the South Boston, Va. native win 21 NASCAR Cup Series races, including the Southern 500 and two Coca-Cola 600s, the most recent flag-to-flag win in the Cup Series tends to be the story most often repeated whenever the NBC analyst’s name is brought up in 2022.

But let us not forget the story of how Burton used a move many thought would be a career downgrade to battle back from the precipice of winless, unsponsored anonymity, earning a trio of top-10 points finishes and the final four wins of his Cup Series career in a true testament to the maturity and professionalism of the veteran wheelman.

After a winless first campaign behind the wheel of Jack Roush’s No. 99 Exide Batteries Ford, Burton’s first career win came in Texas Motor Speedway’s inaugural Cup race in April 1997. With the victory, Burton became the first driver other than Mark Martin to win a Cup race for Roush, setting in motion the pieces that would result in Roush Racing becoming a five-car megateam by 2005.

.@FordPerformance and Roush Racing had a stellar regular season in 2005, putting all five of their cars in the Playoffs (then known as “The Chase for the Nextel Cup” and limited to 10 cars/drivers)!#RoushYates19Years | #RoushYatesEngines | #RoushRacing | @RFKRacing pic.twitter.com/RlGlOmdXHY

Unfortunately for Burton, that would happen without him.

While he won 17 races for Roush between 1997 and 2001 (finishing top-five in points four years out of five) by 2003 things looked a lot different. Though he ended up a still-respectable 12th in the standings, he had scored a grand total of three top fives, a far cry from his career-high of 18 just four years earlier, and was nursing a winless streak dating back to Oct. 2001.

See also
Dropping the Hammer: As the World Turns With RCR

“We were the worst team [at Roush],” said Burton in a 2020 appearance on the Scene Vault podcast. “[We] just couldn’t seem to get the ship righted.”

While Matt Kenseth, Kurt Busch and Greg Biffle emerged as a new generation of winning Roush drivers, joining Martin (the ageless wonder) as the face of Ford’s flagship team, Burton took a nosedive.

The No. 99 team lost primary sponsor CITGO before the start of 2004, leaving Roush to piece together backers for much of that year. SKF, Hot Wheels and Duke Children’s Hospital were among the logos to appear for one-off races on Burton’s Taurus.

Throughout the first 22 races, Burton only brought the car home in the top five once.

“It was time for me and Jack [Roush] to do something different,” reflected Burton, and as Silly Season speculation had hinted, he announced in August he was leaving for Richard Childress Racing’s No. 30 Chevrolet, effective immediately.

Only the driver known as “the Mayor” for his popularity in the garage could handle a midseason departure without ticking anybody off. You’ll be hard-pressed to find a negative word about the deal from anyone involved.

“It was one of those things that happens,” Burton told the New York Times in 2008, “it was good for everybody.”

But his time at RCR got off to a slow start. After moving to the team’s No. 31 Cingular Wireless-sponsored entry for 2005, Burton fell to 18th in the standings with only three top-fives to his name and an embarrassing seven laps led on the season.

With Burton’s old team, newcomer Carl Edwards won four races to finish the season third. From the outside, it looked as though the 38-year-old Burton had simply lost his edge.

Except, just 12 races into 2006, Burton had already exceeded his top-10s total from the year before. Then he kept going. Between Texas in April and Watkins Glen in August, Burton never finished worse than 15th. In September, he became the eighth driver to qualify for the Chase for the Cup, his first appearance in NASCAR’s postseason.

Then, in the third race of the Chase at Dover Motor Speedway, Burton took the lead from Kenseth with six laps to go and held off Edwards to win his first Cup race since 2001, breaking a winless streak of 175 races and almost five full years.

On this day in 2006, Jeff Burton snaps a long winless streak at Dover. Here is former teammate Matt Kenseth congratulating him after a great battle. pic.twitter.com/Yv80Bd7QaH

The way Burton tells it, that had always been the plan.

“Where we need to be,” as it turned out, was leading the Cup Series standings for the first time since 1999.

Though he’d lose the points lead in the next race at Martinsville Speedway and eventually fade to seventh in the final tally, Jeff Burton was back and so was RCR. After all three Childress teams had gone winless in both 2004 and 2005, Burton and his teammate Kevin Harvick had come out swinging, winning six races between them and becoming the first RCR drivers to make the Chase in 2006.

Burton didn’t slow down in 2007, opening the year with five top-fives in the first seven races, including a win at Texas scored with a last-lap pass on Kenseth. Burton made the Chase again, finishing eighth. He’d win two more times for RCR in 2008, at Bristol and Charlotte, on his way to a sixth-place finish in the points, his best result since third in 2000.

“The Mayor” would never win another Cup race, retiring after 2013 to join NBC’s NASCAR coverage, where he remains to this day.

The years between 2003 and 2005 looked like the start of a backslide into obscurity for Jeff Burton, but by leaving Roush, gambling on his ability to turn mid-pack RCR around, he was able to challenge for a championship again.

Fitting then, that Roush Racing should figure in the similar reinvention of Brad Keselowski. At 36, Keselowski is two years younger than Burton was when he left Roush for RCR. Leaving his longtime Team Penske ride for an ownership role at what is now RFK Racing, a struggling organization with championship pedigree, Keselowski’s decision may have puzzled some fans, and his on- and off-track struggles in 2022 have given detractors plenty of ammo.

Kes is my most watched driver, unless AJ is running.
I really hated to see him get the killer penalty, but as it turns out, it’s really NBD.
They weren’t going to be in the championship mix anyway, & it’s a hard lesson learned for the entire Org.
I never was too high on Matt McCall, strategy wise, but be that as it may, I’m looking forward to next year.
Even though I have to admit, that makes me sound a little like a Cubs fan.

I honestly thought Brad would have figured out the new car by now. Not the whole outfit but just Brad. He’s running in 29th position right now, I would love to see him get a win before the playoffs. Remember, anybody can win Daytona, no talent needed said Austin. How would nascar feel about Brad winning his way into the playoffs.

Hendricknascar would fine him or penalize (for massaging a body panel) the team again – remember he’s driving a Ford !