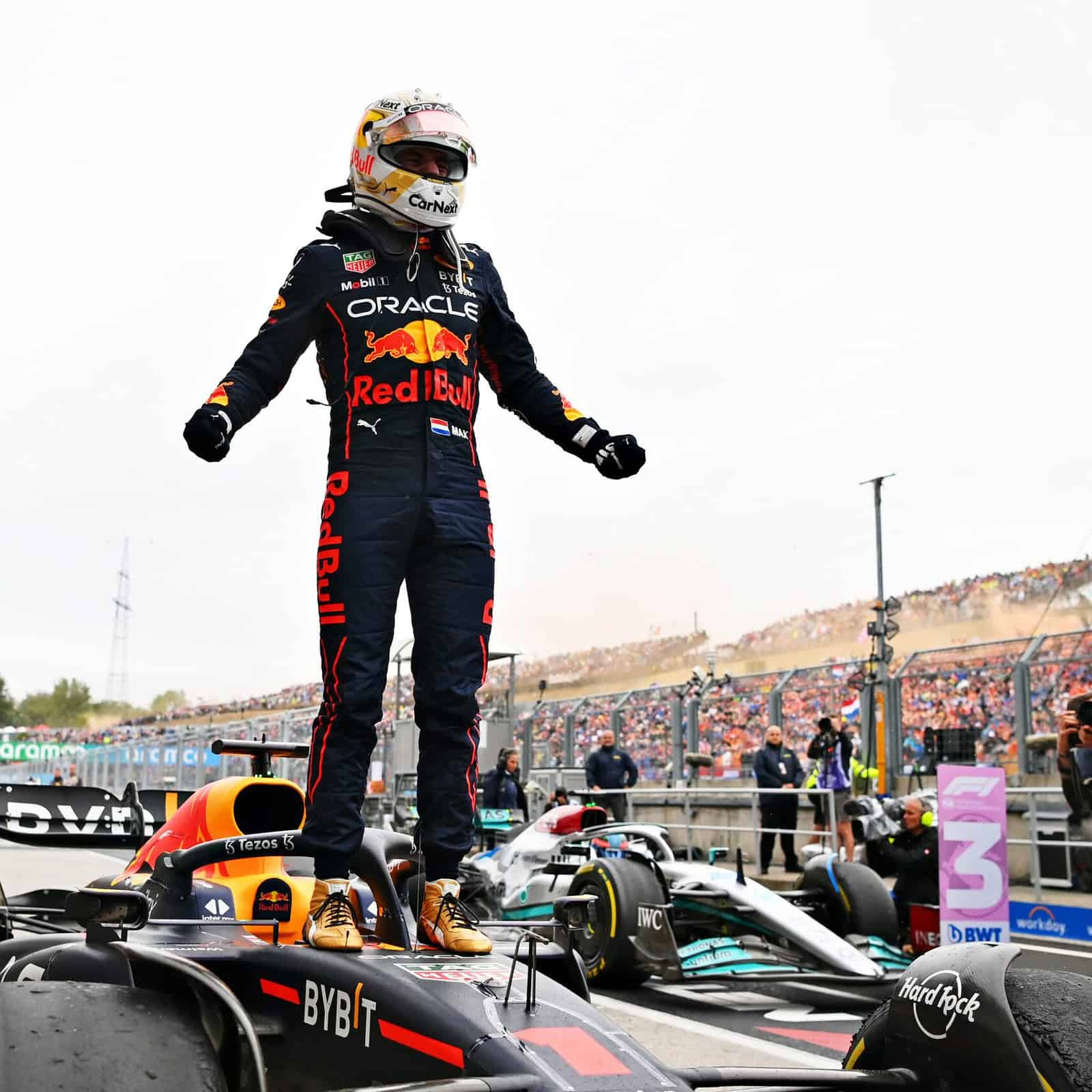 In the last race before Formula 1 takes its customary break, Max Verstappen coasted to a second straight victory Sunday (July 31) at the Hungarian Grand Prix.  The win bumps Verstappen’s season total to eight and further opens up his championship lead over Charles Leclerc to 80 points (258–178).  He now has 28 career F1 victories, this turn of good fortune coming amidst further Ferrari mismanagement in 2022.

Just behind Verstappen, rival Lewis Hamilton scored his second consecutive second-place finish on the year and his fifth straight podium finish.  Even with those consistent results, he still sits only sixth in the standings.

George Russell started from the pole, a career first, but could not keep his Mercedes up front and wound up crossing the line in third position.  While a second straight podium effort looks good, Russell’s first half report card is even better when you note he has finished outside of the top five only once, a crash at Silverstone.

Carlos Sainz made the best of Ferrariʻs botched race strategy, ending the Hungarian Grand Prix in fourth position.  Sergio Perez, who started in 11th and seemed to struggle with his Red Bull throughout the race, wound up fifth.

Charles Leclerc, who held the lead during the middle stage of the race, fell victim to Ferrari putting him on hard tires at a poor time and then leaving them on for far too long.  The Prancing Pony could never find pace on the hards and Leclerc watched Verstappen pass him with ease.  Beginning in Spain, eight races ago, Leclerc has finished on the podium just once (winning the Austrian Grand Prix) despite earning four poles and likely having the fastest car in more than half of those eight races.

Lando Norris put together a solid weekend, placing seventh, which gives him a trifecta of sevenths over the past three events.

Fernando Alonso battled his teammate Esteban Ocon more than anyone else on track during the event and prevailed to take eighth.  Ocon took ninth to give Alpine two finishes inside the points.

Sebastian Vettel, after starting from the rear, rounded out the top 10 after he announced his retirement from F1 earlier in the week.

Red Bull’s first and fifth-place finishes helped them maintain their spot atop the constructor’s championship, where they lead by a hefty 97 points over Ferrari (431–334).  Mercedes continues to chip away in the standings, though and is now providing a threat for second with 304.

On what was predicted to be a race heavily influenced by rain, the downpour never really came, save for the final few moments.  George Russell made a clean getaway at lights out and governed the race in surprising fashion.  The two Ferraris slotted in behind, Sainz then Leclerc, with Norris up to fourth and Hamilton moving in behind.  The Alpines of Ocon and Alonso moved into sixth and seventh with Verstappen gaining two positions on the start to reach eighth.

From there, the focus became watching how Verstappen could navigate traffic while climbing through the field.  At the front, Russell maintained his position until lap 31; by then, Verstappen had moved into fourth.

On lap 37, rain began to become a concern but never really materialized.  A couple laps later, the race turned upside down for Ferrari.  Leclerc had taken the lead from Russell but then pitted on lap 40 to take hard tires and ensure he met the regulations of using two different compounds.
Leclerc became an easy target as the hards never worked and he fell to sixth by the time the team brought him in to change to mediums.

From there, Verstappen, gifted with first, felt no challenge from Russell or Sainz.  Moving into the lead on lap 52, Verstappen found himself with the ability to drive judiciously as rain began to sprinkle the track on the last two circuits.  Only Hamilton was able to drive forward, passing Sainz and Russell in the final laps and highlighting how Mercedes continues to score podium points from Ferrari miscues.

Good teams do good stuff.  No famous driver or team principal ever made such a pithy comment but it should be something that circulates because it is simply an easy axiom.  In that regard, Red Bull keeps making steady decisions and appears calm whenever a challenge appears –even with their usual hyperbole and drama.

Just the same, Mercedes, with a lackluster car, continues to let things come to them, fully aware they are unable to challenge at the front.  These two teams have shown that by staying the course, they are able to wind up with finishes that perhaps they do not deserve.  Verstappen may have accumulated eight wins thus far in 2022 but at least three have been gifts.  For Mercedes, the story is similar in that they are snagging podium finishes when they do not have the pace to warrant such results.

Why did Ferrari pit Leclerc before Sainz on lap 40?  At the time, Sainz was driving on tires that were four laps older than Leclerc, yet the team still brought Leclerc into the pits first.  The lampooning of Ferrari on social media began in haste.

The confusion Ferrari has displayed with its strategy over the first half of the year, despite a clearly fast car, has been baffling at the least and downright moronic at worst.  That team principal Mattia Binotto walked off at lap 59, when the result of the team’s strategy became a clear failed enterprise, offers all the evidence needed to recognize the bizarre structural issues within the team.

There’s every reason to embrace team orders are a problem and that the sport would benefit from policing them.  And yet… they persist, occasionally bucking the trend by not becoming the impediment to good racing they might seem to be.  At the Hungarian GP, Alpine could sure have used some way to work together in a way that would have benefitted the team.

Sometimes, teammates just find one another and cannot get out of one another’s way; such was the case in Hungary.  From lights out, Alonso and Ocon could do nothing but get in each other’s way and be nothing but an irritant to each other.  The team could have been smarter in how they pitted the two drivers, potentially giving them either space or acknowledging preference.  Instead, even when going through pit cycles, the two came out neck-and-neck, providing further material for antagonism.

Sure, Verstappen earned his eighth win.  Yes, Hamilton scored another surprising podium and looked to show more of his championship form than he has for much of the season.  But…whatever.  The easy choice here is Sebastian Vettel.

Vettel suffered through a miserable qualifying session in Hungary, failing to make it out of Q1 after his team had to rebuild his car following his crash in FP3.

Yet, starting in 18th, the German driver made his way up to 10th to score a point in his final visit to the track.  It is difficult to recall how dominant a driver he was from 2010-2013, but at his peak, Vettel was brilliant.  His time at Ferrari and now Aston Martin has done more to show how these teams are troubled rather than illustrate his lack of talent.  Grabbing a top-10 finish is a moment of recognition that, given decent equipment, the former F1 champion can still score a solid result (and 10th is probably an overreach for a disappointing Aston).

Max Verstappen recognized Red Bull’s cool-headed approach, saying, “It feels crazy to have won the race today from P10, especially on a track like this where it’s very hard to pass. We made all the right calls today, there were some good undercuts and overall we did a great job today as a team. This was definitely one of my best races, despite the little 360-degree spin! I’m very happy with the lead that we have [in points], but of course, we have to keep pushing and win more races.”

Mercedes’ Toto Wolff, being both cheerleader and realist, states, “Today, we had good pace, but we need to stay humble and look at race weekend after race weekend so we can try to gain more learnings and experiment to put us in a situation where we can actually fight for wins at the end of the season.”

Note: Hamilton scored an additional point for setting the fastest lap of the race. Ricciardo received a five-second time penalty for causing a collision.