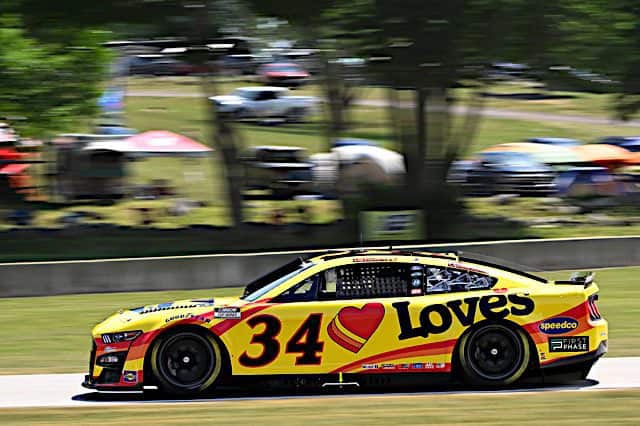 NASCAR revealed that the Front Row Motorsports team of Michael McDowell has been handed an L2 penalty complete with a large monetary fine and point docking in their penalty report released on July 26.

The L2 penalty comes after NASCAR found the team to have modified a single source supplied part.

McDowell’s crew chief Blake Harris has been fined $100,000 and suspended for the next four NASCAR Cup Series events according to the report. In addition, the No. 34 team has been deducted 100 driver and owner points and will be deducted 10 playoff points if the team qualifies for the post-season.

The infraction was found after NASCAR randomly selected the vehicles of the No. 34 and the No. 47 of Ricky Stenhouse Jr to be taken back to NASCAR R&D for further inspection.

McDowell is the second team to be handed an L2 penalty after Brad Keselowski‘s No. 6 team was hit with a similar infraction earlier this year.

The No. 34 was credited with a sixth-place finish this most recent weekend at Pocono Raceway after both original race winner Denny Hamlin and Kyle Busch were disqualified.

McDowell has been having his career-best season, statistically speaking, as he has earned eight top 10s and one top five so far in 2022. Before the penalty, he was 20th in standings, 207 points behind the cut line, but now will likely be scored in 26th.

Not a Reverend Joe or Mr. H car. Imagine that! Wouldn’t surprise me if the part is better designed now,

When are the Hendrick cars going to nascar to be inspected. I dont remember ever hearing of elliots or larsons car going to the nascar inspection center to be tore apart. Probably never will

Since the 1st place and 2nd place cars go through post race teardown after each race, Hendrick cars have been inspected quite often.

Bill B
Reply to  Kicks

People must not read the articles. If they had they would know…

“We can’t inspect the entire field at that level of scrutiny or we’d be there until about Wednesday or Thursday,” Miller said. “Our procedure is to take the first- and second-place car and a random car… and do that post-race tear down on them. The top five cars all go through an inspection process – back through the OSS, make sure the alignment is correct… and a visual inspection of the outside of the car to make sure nothing has been pushed, prodded or added. The top five cars are always inspected, but the top two go through the complete teardown process at the racetrack.’”

Im talking about taking cars back to nascar r&d like nascar supposedly randomly selected the 34 and 47 team. Amazing how they skipped the 9 and 5 team.

So you are really saying that you don’t believe that they are randomly selected? Well there is no way to prove or disprove that, so basically you are just spouting a conspiracy theory.
Hint: It helps if you are standing on a soap box.

Bill looks like the ccp guidelines has struck again on me

Bill B
Reply to  DON

Gee, it really sounds like you know what you are talking about. I have an idea Sherlock, you fact check and post the link here. Then we can all look at your irrefutable “proof” and compliment you on your insights.

Look, anyone who has been keeping up with nascar for the last 30 years knows that rick hendrick teams gets special treatment from the media and nascar a blind person that is actually honest can see it. I like elliot and larson and i think they are good drivers so i really have nothing against the drivers just the constant hendrick favoritism that goes on from steve latart and jr all hendrick ass kissers. If you cant see that, then you are not being honest with anyone even yourself

Well if you are talking about the media, I am not even getting into that hornets nest. The media are idiots just looking for ratings, views or clicks. The only thing that would begin to fix that is if the only people that were allowed to cover the sport were not ever affiliated with any NASCAR team, basically outsiders.

It wouldn’t matter if the hendricknascar teams were inspected – they would all pass pre-race, post-race and any R&D inspection.

Bill B
Reply to  CHIEF

My goodness dude, could you just once say something that adds to the conversation instead of the same comment every time?

WE GET IT, you hate Hendrick, they cheat, NASCAR bends over backward for them, and they suck. Now that that’s been established you don’t have to pollute the comment section with the same comment in every article.

CHIEF
Reply to  Bill B

My apologies Li’l Bill, just referencing the parity achieved by hendricknascar, 12 Chevy wins, 5 Toyota wins and 4 Ford wins. Yes, Lil Bill, you are correct, the score is all tied up !

And the other team’s got a slap on the wrist when it came to fines and points.

Where were all these guys when the Toyotas and Fords were winning everything (remember the big 3?) and HMS and Chevy were “down”?

I’ve given up on arguing the point. People see what they want to see, tinted by their own biases. I really don’t have a favorite manufacture or driver, but there are still drivers that I dislike and drivers that I like. I can say that I do cheer for at least one driver from each camp (Toyota, Ford and Chevy).

NASCAR’s decision making process baffles me most of the time but I really don’t believe they are fixing the results. I base that on the assumption that the manufacturers and teams are being run by pretty intelligent people, and I can’t see any reason why they would participate in such a costly endeavor if they didn’t think they were getting a fair shake overall. Fans on the other hand, not so much.

Check out Jr’s podcast – the one where Jimmy Spencer is on the show. It peels back the curtain a little bit. Actually, most of them I’ve heard have been pretty good. His show does give a different view of the sport and what was going on at different times.

Last edited 6 months ago by Jeremy
0
0

Good point and I agree. I can’t figure nascar out either and wonder if just one person is making all these calls. Chicago street race still amazes me, and then I saw the map and lmao.

And who won the championship during that toyota/ford winning stint – chevy !