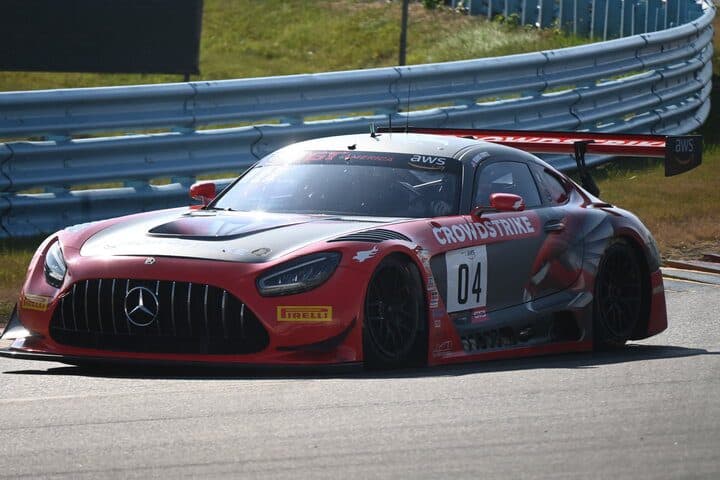 WATKINS GLEN, N.Y. – Crowdstrike Racing with Riley Motorsports’ George Kurtz was able to pass Zelus Motorsports’ Jason Harward in turn 9 on the final lap and held on to claim the GT America Powered by AWS weekend sweep at Watkins Glen Sunday (July 24). It is Kurtz’s fifth win of the year.

“It was definitely not an easy race,” Kurtz told Frontstretch afterwards. “I knew after the restart that [Harward] had a lot of pickup on his tires since he wasn’t able to clear everything and I saw him twitching around. I knew I was faster in [turn 8], so if I could pull a move there, I could get him in [turn 9]. That’s how it worked out.”

Kurtz started from pole in his Mercedes by virtue of having the fastest lap of the race on Saturday. From there, he was able to incrementally pull away from the Lamborghini of Harward. Behind them, Hardpoint’s PJ Hyett continued his education after having never driven the Porsche 911 GT3 R prior to Saturday. He went from being well off the pace Saturday to turning in laps faster than Kurtz and moving up to third.

Kurtz had a lead as big as three seconds over Harward, but lapped GT4 traffic allowed Harward to get back up to Kurtz. At the halfway point, Harward executed an over-and-under move on Kurtz to get alongside exiting turn 1. He was able to make the pass to take the lead.

Unfortunately for Hyett, his excellent run was ruined by a spin in turn 11. He was unable to get the Porsche re-fired and continue, so the race’s sole full-course caution was thrown with 17 minutes to go.

The green came back out with just six minutes to go, enough time for four laps of the 3.4-mile circuit. With that, Kurtz put the pressure on Harward pretty hard. Jason Daskalos, driving the Audi R8 LMS Ultra, was third and right up in the mix as well.

Daskalos was ultimately able to pressure Kurtz for second, but a late drive-through penalty for passing under yellow took him right out of the hunt.

On the final lap, Harward was starting to lose the handle on his Lamborghini, allowing Kurtz to get back to him. Kurtz got alongside on the run down to turn 8. Harward held that move off, but Kurtz was on the inside for turn 9.

Harward attempted another over-and-under move, similar to the one that got him the lead earlier. Unfortunately, that did not work out as Kurtz was able to clear him and take the win.

Kurtz’s margin of victory was .231 seconds over Harward. Due to penalties to both Daskalos and Mirco Schultis, Triarsi Competizione’s Justin Wetherill ended up third, then Daskalos and Schultis.

Hattori Motorsports’ Seth Lucas, after his maiden victory on Saturday, led the field to green. A good jump allowed him to break away from Ross Chouest. Further back, there was a near calamity at the entrance to the esses on the first lap when Adam Adelson and Moisey Uretsky had contact. This nearly caused a massive crash, but everyone was able to keep their cars straight.

The Toyota GR Supra GT4 was a good match for Watkins Glen. Lucas was able to open a two-second advantage over Chouest early on. Chouest had to deal with the Aston Martin of Elias Sabo.

Uretsky’s interesting morning continued when he collided with Robb Holland in the inner loop, resulting in both drivers spinning out. They were both able to continue, but lost significant time.

By the time the caution came out, the overall leaders had lapped the entire GT4 field. Lucas lost a decent advantage with the yellow, but had no issues holding on to take the sweep.

Lucas ended up 2.203 seconds ahead of Chouest in sixth overall at the finish. SRQ Motorsports’ Marko Radisic was third in his BMW, then SMOOGE Racing’s Todd Coleman. BSport Racing’s Bryan Putt rounded out the top five.

GT America Powered by AWS teams will take a week off before returning to action in Nashville as part of the Music City Grand Prix weekend. Race No. 1 is scheduled for Aug. 6 at 8:25 p.m. ET and will end in near darkness.