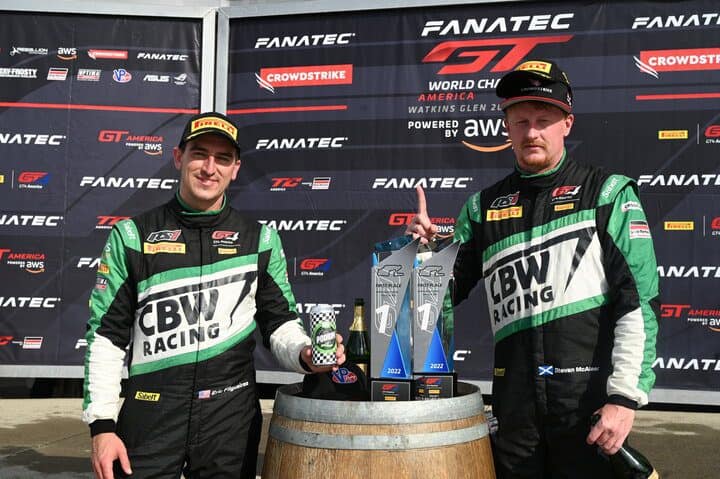 Filguerias started from the overall pole and scooted off to a small advantage. Gavin Sanders started second in his Conquest Mercedes, but quickly lost the advantage to AutoTechnic Racing’s Tom Capizzi. That didn’t last as Capizzi dropped a wheel exiting turn 6, allowing Sanders to get back by.

By the time mid-race pit stops came around, Filguerias had a lead of over five seconds over Sanders. When the window opened 25 minutes in, Filguerias pitted almost immediately in order to swap over to McAleer.

The pit stops actually allowed the Rennsport One team to increase their lead to 8.4 seconds over Conquest Racing’s Michai Stephens. However, that lead was not long for this world as Random Vandals Racing’s Al Carter had a failure in the left front of his BMW that shot him off and into the tires in turn 7 to bring out the race’s sole caution. Carter was ok, but was out for the day.

Once the race restarted, McAleer was able to hold a steady hand while the Pro-Am battle swamped Stephens. That allowed McAleer to pull away to take the overall and Silver class victories.

The margin of victory was 2.682 seconds over Sanders and Stephens. SMOOGE Racing’s Kevin Conway and John Geesbreght were third. Dexter Racing’s Ryan Dexter and Dominic Starkweather were fourth in Silver (ninth overall), while AutoTechnic Racing’s Austen Smith and Zac Anderson were fifth in class.

In Pro-Am, Capizzi started on the Pro-Am pole and ended up doing battle with the Silver class leaders while putting significant distance on the rest of their direct competitors. Further back, Edgar Lau drove his Ford Mustang GT4 up to second in class.

Meanwhile, there was Aston Martin on Aston Martin violence in the Esses when GMG Racing’s Jason Bell and BSport Racing’s Bryan Putt came together. Putt’s car ended up with a broken right front toe link that put him out for the day. Bell ended up with a flat tire that necessitated a pit stop.

Capizzi gave way to John Capestro-Dubets at the halfway point, who continued his strong form from Lime Rock last weekend. He was still third overall up until the caution.

It did not take long for Johnson to move up to third and get to Capestro-Dubets’s rear bumper. Johnson attempted to make a move at turn 8 to the outside. Capestro-Dubets appeared to move just a little bit to the left under braking. Contact was made, causing Johnson’s rear end to jump off the ground and send him off.

Johnson rejoined the track, but the contact cut his right rear tire. As a result, Johnson spun in turn 9. While Johnson was able to drive back to the pits, there was suspension damage to the No. 124 Mustang which put him out.

Capestro-Dubets did not get off scot free here. He was also forced to pit with issues after the contact that ultimately ended his race.

With the top two in Pro-Am going out because of the contact, the lead fell to The Heart of Racing’s Ian James, who was in the middle of a five-way battle for what was now the class victory. Premier Racing’s Elliott Skeer tried his best, but he could not prevent James and Gray Newell from taking the win in their Aston Martin.

James and Newell ended up fourth overall in their Aston Martin. They were .48 seconds ahead of Skeer and Adam Adelson at the finish. Flying Lizard Motorsports’ Andy Lee and Elias Sabo were third, then NOLAsport’s Jason Hart and Scott Noble. Stephen Cameron Racing’s Chris Cagnazzi and Guy Cosmo were fifth.

In the Am class, BimmerWorld Racing’s Charlie Postins and James Clay continued their strong form to claim their fifth straight Am-class win and sixth of the year in 10th overall. They were 6.419 seconds ahead of the KRUGSPEED Supra of Anthony Geraci and Jaden Lander. AutoTechnic Racing’s No. 53 BMW for Rob Walker and Alex Filsinger were third, then NOLAsport’s Am entries for Alain Stad and Matt Travis (No. 19) and Sean Gibbons and Sam Owen (No. 7).

Pirelli GT4 America SprintX teams will be back on-track Sunday morning for Race No. 2 at Watkins Glen at 11:10 a.m. ET. The race will be streamed live on the GT World YouTube channel.