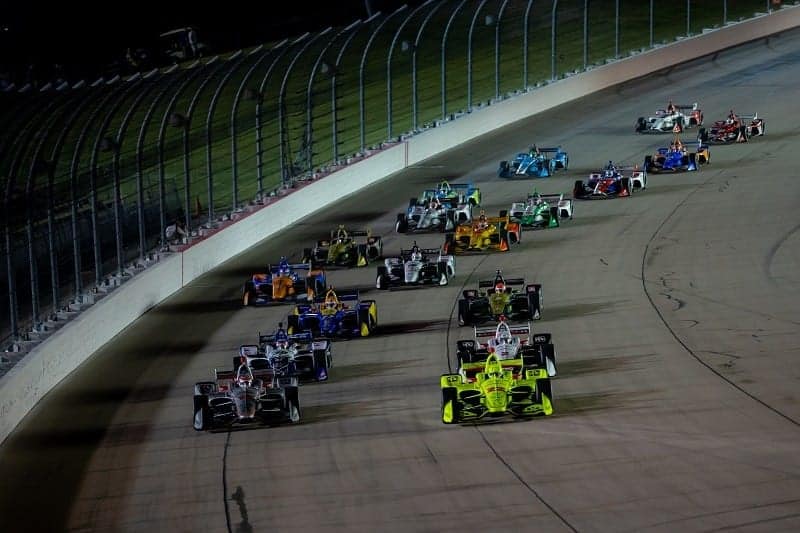 The NTT IndyCar Series returns to Iowa Speedway for the first time since 2020 in a doubleheader.

Fans of America’s premier open-wheel series will be treated to a 250-lap race on Saturday, and a 300-lap event on Sunday around the ⅞-mile circuit as part of Hy-Vee IndyCar Race Weekend.

It took a while but Scott Dixon scored the 52nd victory of his IndyCar career last Sunday (July 17), leading a race-high 40 of 85 laps in Toronto to tie Mario Andretti for second on the all-time win list. The triumph also broke a tie between Dixon and Team Penske wheelman Will Power, who both entered the race with three wins at Exhibition Place. Now the all-time leader at Toronto, Dixon heads to a track where he has never won. Nonetheless, his numbers have been stellar.

Dixon has been the bridesmaid in two of his last four Iowa races and has four podiums overall. Can Dixon breakthrough in this weekend’s doubleheader?

Josef Newgarden is searching for his fourth win of the 2022 season. Although he has had an up-and-down season as far as consistency goes, the two-time series champion loves corn. OK, that might be untrue, but he does love Iowa. He has three wins at the facility, including two of the last three. Furthermore, Penske has won the last three Iowa races. The other winner not named Newgarden among the three was Simon Pagenaud.

This weekend could make-or-break for many in the field. With a maximum of 100 points on the table this weekend, it’s go time for some and play it smart time for others. Expect drivers in need of a big points day, like Pato O’Ward, Scott McLaughlin and Colton Herta, to be more aggressive with their strategies.

With just seven races remaining, and Marcus Ericsson leading the field by 35 points over second-place Power, there isn’t much time to make up lost points. With that in mind, Dixon and Newgarden, who have a combined 75 IndyCar victories and eight championships, may elect to be more aggressive to claw into Ericsson’s advantage.

It’s an interesting way to look at the situation because Ericsson is not a guy who wins a lot of races. Some people may quip, ‘But he just won the Indianapolis 500!‘ While that may be true, he’s not the type of driver who wins five or more races a season.

That doesn’t mean he’s bad. In fact, it’s a compliment to his consistency. He may not have a winning car every week, but he’s there. Ericsson is to IndyCar what Matt Kenseth and Terry Labonte were to NASCAR. Kenseth won the 2003 championship with just one win over 36 races in what turned out to be NASCAR’s final season before converting to a playoff format to decide the champion. Labonte, a two-time Cup champion, scored his second title in 1996 with two wins on the season, while teammate Jeff Gordon came in 2nd despite winning 10 races.

Now, don’t get ahead of yourselves. I’m not saying he should be in the Hall of Fame. This is only his fourth year in the series, so he has a ways to go, but these are the qualities that Ericsson is exemplifying at a very young age, which is very promising for Chip Ganassi Racing.

Momentum can switch at any moment, but it will likely take a bad race or two for the field to catch up to Ericsson — if that were to happen.

A unique race calls for a unique qualifying format. Drivers will turn two laps. The first lap will determine their starting spot for the Hy-VeeDeals.com 250, while the second lap will set the starting grid for the Hy-Vee Salute to Farmers 300.

IndyCar is known for adding small gimmicks to events without re-inventing the wheel, and this appears to be the case as well. Perhaps NASCAR can look at something similar for a future doubleheader weekend.

If these results were to come to fruition or partially intertwine, Ericsson would end up padding his point lead, if anything.

Looking forward to a weekend full of Indycar short track racing! Also hope to see Marco claim the SRX Championship – I know, I know… it’s a gimmicky race format, but he has surprised me how well he has taken to the stock car and short tracks, especially against guys who have spent most of their careers in bullrings and/or full bodied cars.

Last edited 6 months ago by Jeremy
1
0