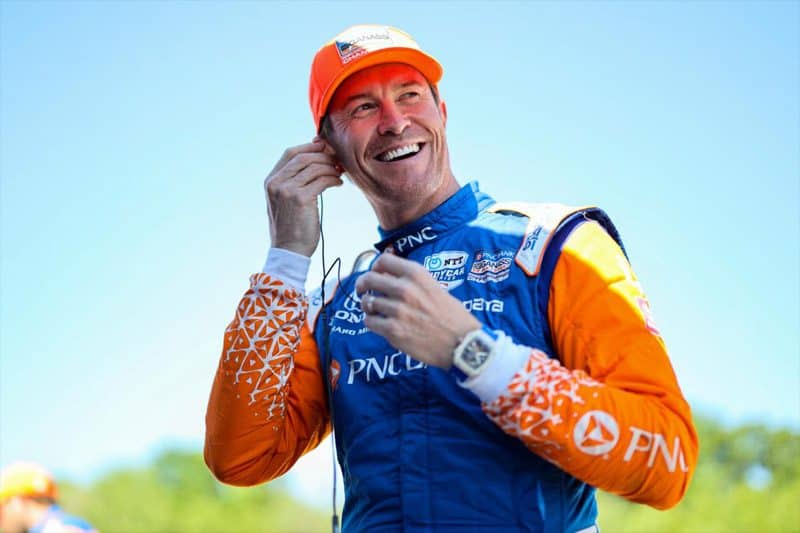 Scott Dixon took his first win of 2022 in Sunday’s (July 17) Honda Indy Toronto, holding off near constant pressure from Colton Herta throughout the day.

Dixon jumped polesitter Herta on an undercut strategy during the first pit cycle of the day, and the Ganassi and Andretti drivers subsequently waltzed away from the field for most of the race. Herta made several attempts on Dixon’s lead throughout a caution-riddled latter half of the day, but to no avail.

“We struggled a little bit actually on rears … it was a tough drive, man,” Dixon told NBC’s Dave Burns.

“Ended a streak there, which is fantastic. Just so happy for the team, it’s been a crazy year for the No. 9.”

‘It’s amazing, you know honestly, to be close to Mario,” Dixon said when reminded that he is now level with Andretti on the all-time wins list.

“Every time I’m asked these questions, I’m just so thankful that we still have A.J. (Foyt) and him in the pits.”

Herta’s final shot to pounce on Dixon came at the race’s final restart on lap 67, though the more experienced head prevailed and Dixon waltzed away from Herta, firmly controlling the race’s final 19 laps. Dixon’s ability to save fuel and maintain a solid race pace is well known, and much of the field was left needing to save fuel over the course of the final stint. Dixon’s pace amid this predicament proved key in taking his first win since Texas last year.

Despite making a vicious charge at Herta over the final three laps, Felix Rosenqvist followed the front row starters home for a third-place finish, his first podium result since winning at Road America in 2020.

Graham Rahal likewise took a season best finish around the streets of Exhibition Place, following Rosenqvist home for a fourth-place result. Rahal’s previous best finish in 2022 was seventh place at both St. Petersburg and Long Beach.

Alex Palou quietly carved his way through the field on off-kilter pit strategy, making his way from a 24th-place grid position, to an impressive sixth-place finish. Palau pitted on lap 10, eager to get off of the softer Firestone red tires, using clean air and the more durable Firestone black tires to set a blistering pace and jump up several positions as pit stops cycled through.

A strong day for Alexander Rossi was cut short on lap 45, ending in the turn 3 wall after contact with Felix Rosenqvist. The pair ran side by side into the sharp right-hand corner with Rosenqvist throwing a late dive down Rossi’s inside. Both drivers kept things clean until a snap of oversteer sent Rosenqvist into Rossi’s right side with enough force to nudge Rossi into the wall, and out of the race.

“I’ve heard you guys in the booth are comparing to last week though, but the big difference is I wasn’t the one doing the overtaking last week,” Rossi told NBC’s Dillon Welch in reference to the multiple instances of contact between Rossi and his Andretti teammates at Mid-Ohio.

Kyle Kirkwood, set to take over Rossi’s seat at Andretti Autosport in 2023, was involved in contact with Jimmie Johnson on lap 60. Johnson was clipped from behind by Kirkwood as the two ran side by side through turn 9. Johnson was sent spinning, leaving Kirkwood wedged between Johnson’s No. 48 Honda and the barriers with front end damage.

Johnson was able to continue, while Kirkwood retired.

Takuma Sato retired from the race on lap 1 after picking up heavy suspension damage owing to contact with the turn 2 wall.

Next up for the NTT IndyCar Series will be the Hy-Veedeals.com 250 at 4:00 pm ET, Saturday, July 23 at Iowa Speedway. This will be the first race of an Iowa doubleheader from July 23-July 24.

The finishing order for the 2022 Honda Indy Toronto is: