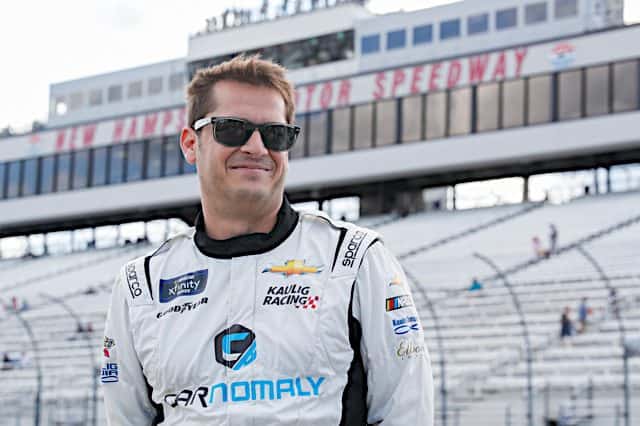 If it’s true that you have to lose a few before you win, then the win is coming for Landon Cassill. Cassill finished third on Saturday (July 16) in the Crayon 200 at New Hampshire Motor Speedway, but the win was close.

And then came the heartbreak.

After finishing third, Cassill was disqualified for a height violation on the No. 10.

But that doesn’t change what Cassill did.

Cassill led 17 laps, his first of 2022. The number matches his previous career Xfinity Series total. His third top five on the year comes after scoring just one in 176 starts prior to this season.

It’s not often that a 33-year-old Xfinity driver is just now getting his big break. The casual observer might have written Cassill off long ago. But to some trained eyes, there was a certain hunch he had something more.

It would have been easy for owners to consider Cassill damaged goods. They almost did. He ran just four NXS races in 2020 before running a full schedule for underfunded JD Motorsports in 2021. He failed to qualify in Phoenix to close a season that saw not a single top-10 run and seven DNFs.

None of that was Cassill’s fault; JD Motorsports has exactly six top-five results in over 1500 races. Give them an ‘A’ for effort, but those numbers date back to 1983, and Cassill, a driver inexperienced in contending for wins in a national series, wasn’t the reason for the performance.

Still, there wasn’t a lot to go on other than that hunch that Cassill had something when it came to taking a chance on the 2008 NXS Rookie of the Year.

Matt Kaulig needed a driver to replace Justin Haley, who went to the Cup Series with Kaulig Racing this year, and Cassill got the call.

Setting the world on fire has been a slow process for Cassill and the No. 10 team, but it’s definitely starting to spark.

Cassill raced, and passed plenty of competitive drivers at Loudon. He raced for, and got, the lead.

After more than 500 starts across NASCAR’s three national series, Cassill is learning to race for wins. And it’s not the same as racing for top 20s or top 15s.

“It’s harder than it looks, for sure,” Cassill told the media after the Crayon 200. “I really thought if I could get the lead, I could keep the lead

“It was my first time racing for the win. It takes time. I felt good. I felt comfortable. I had a plan for the restart. I’m proud of the way I executed that (last) restart.”

That’s all information Cassill has in the bank now. Next time, he’ll know what he did right and what he can do differently.

That nagging belief that Cassill was capable of more is proving truer each week.

“I’ve always appreciated that people had faith in me like that,” Cassill said of his reputation as a better-than-the-numbers racer. “But I do feel like the one that most people, including myself, underestimate is that this doesn’t happen automatically. Once you get up there, you have to earn it, you have to keep it.”

Cassill lost twice on Saturday, once on the track and once in inspection (it’s unlikely that the violation gave him an advantage, but rules are rules).

But if you have to lose to win, Cassill’s day, at long last, just might be coming.