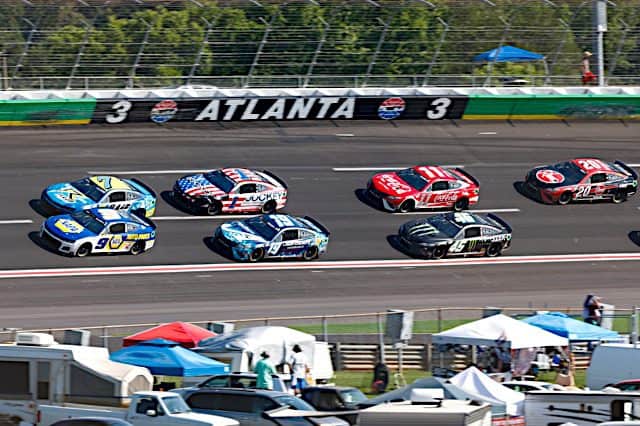 1. Do we really need to hear more about the Pool Room?

Yes, if you saw Sunday’s (July 10) race broadcast, you probably heard more than you ever cared to know about the legacy and history of the Dawsonville Pool Room.

Look, I’ve been to the Pool Room and the nearby Georgia Racing Hall of Fame. The restaurant has a great atmosphere and serves up a very good burger, and if you have seen recent photos of me, you can quickly figure that I never met a burger that I didn’t like.

Chase Elliott fan or not, I’d recommend a stop there once if you care anything about racing and the impact that north Georgia had on the sport. I’m trying to figure out how to convince my wife an upcoming trip to nearby Helen, Ga., should include a trip to Dawsonville, but please don’t tell her I said that.

But that affinity for the Dawsonville locale should have a limit. While Elliott is a rarity in that a town rallies around him each week unlike any other driver, it sometimes gets to be a bit much. A live camera shot toward the end of the race is one thing. But a live look-in like it’s election night of a big political race was a way bit excessive, and it does little to give fans a reason to watch who just may happen to like drivers other than Elliott.

I mean, if you want small towns with references to pop culture, little Senoia, Ga., where “The Walking Dead” was filmed, is no more than 30 minutes away from Atlanta Motor Speedway. Atlanta itself has no shortage of great eating joints such as The Varsity, and the food source of Sunday’s meal in the Marcy Scott Media Center, Mary Mac’s Tea Room (a tasty selection, by the way).

Sunday’s home state win was a great story, but it’s not worth going overboard for.

2. Will Ross Chastain make it out of the first round?

So Denny Hamlin has to reach his breaking point with Ross Chastain, right?

It’s not a coincidence that other than Elliott, Hamlin had the biggest group of reporters waiting for him Sunday as his car pulled up to the rear of pit road following the Quaker State 400. We saw another run-in with Hamlin and Chastain. Even though Chastain conceded that his car’s handling played a role in Sunday’s final-stage clash between the two, previous instances give Chastain little benefit of the doubt.

The question, of course, is when or if Hamlin will find a way to pay Chastain back.

At this point, there’s a perfect way for Hamlin to do that: the first round of the NASCAR playoffs. What more can be done to ruin someone’s season when they have been among the top drivers than paying them back in the postseason, when frankly, the success of a season is measured? The tracks in the Round of 16, by the way, are Darlington Raceway, Kansas Speedway and … wait for it … Bristol Motor Speedway. Buckle up.

Fans of racing in the 1990s who were in Atlanta this weekend probably had flashbacks to Talladega Superspeedway, which up until 1996 hosted its second race of the season in July.

If you’ve never been to East Alabama or anywhere in the region during the summer, you should know this: It’s hot and unbearable at times. This weekend, as part of a summer where weather apps have been filled with dangerous heat advisories, is no exception.

It’s great for racing fans of the Atlanta area to have gotten a second NASCAR weekend back. In fact, it’s a bit of poetic justice to some, given that it came at the expense of the track that it lost a date to — Kentucky Speedway.

But here’s the thing: Atlanta Motor Speedway was given a grand opportunity at redemption. And despite its grandest efforts to spice up things with a music festival this past weekend with a diverse group of acts that included Flo Rida, Candlebox and Blackberry Smoke, fans did not respond.

If two races in Atlanta are to succeed, AMS needs support from NASCAR and its TV partners to run this July date at night. The future of two race weekends per year in the Peach State may depend on it.

4. Is Corey LaJoie worthy of a greater opportunity?

In the aftermath of his near upset, Corey LaJoie conceded that fans are not used to seeing him run up front and challenge for the win very much. He also noted that Sunday showed what his Spire Motorsports team was capable of doing: going toe-to-toe with the powerhouses of the sport. It can be done at times, but not every week due to the organization lacking the depth of other teams.

Sunday was no fluke. LaJoie has top fives in both events at the “new” Atlanta and has also been stout at Daytona International Speedway multiple times. He has shown that when his team gets a good enough car under him to take advantage of the right factors, he can have success.

It’s easy for fans to overlook a driver running around in the range of 20th or so most weeks, but it’s what you do in those settings that, as small as the victories may seem, can lead to bigger things.

Remember, it was not too long ago that guys like Alex Bowman and Chastain languished in lesser rides and when the opportunity came, they took advantage. LaJoie, if given the right scenario, has shown that he deserves the same.

See also
The Underdog House: Corey LaJoie Got So Close But Was Still So Far From Victory in Atlanta

5. Will a regular season title even matter?

But following Daytona, if he is in the points position he is currently in, the leader of the standings won’t matter much aside for a slight points cushion. Sure, that may help him advance out of the first round of the playoffs, but as we recall from the 2020 season in which Elliott won the title, a dominant regular season matters not. Just ask Hamlin and Kevin Harvick.

The regular season needs to matter more, and it could if an incentive such as an automatic berth to the Round of 8 were to be touted. Otherwise, top teams in points have little reason to lay it all on the line in the final stretch to the postseason.

Before Hamlin decides to take his Feud with Chastain into the playoffs, which the media seems to be actively promoting, (they have to have something to write about.)

He needs to remember that a two-edged sword cuts both ways. I’m sure he’d like to win a championship as well.
He also needs to remember how trying to take someone out of the playoffs worked out for Harvick last year, & Logano before that.
His most productive course of action might be to have a sit down & try to deescalate things on both sides. This isn’t his first rodeo, & we know how things worked out when he & Logano were at the the same point with each other.
It’s hard to sling mud, W/O getting splattered yourself.

Or, get even before the playoffs when the cost will only be a bad finish for that day. I agree, if you start doing that in the playoffs you will be begging to be knocked out yourself. Likewise, if Hamlin (and anyone else for that matter) wants to win a championship, he should limit distractions once the playoffs start. All that BS takes your mind off the task at hand, winning a championship.

Especially Hamlin, who has a history of choking with the title on the line.

Another town use to rally around drivers like Dawsonville does, Nazareth PA and the Andretti’s. It’s not the case anymore, probably because Marco’s such a dud, but in Mario and Michael’s heyday it was different. I always hoped the Andretti’s would break when at Nazareth, since it meant two thirds of the stands would leave, making it easy to get out afterwards.

I don’t understand why Atlanta rates two races anyway, Chase Elliott? Atlanta has always had a hard time drawing fans. There have been plenty of excuses why the fans stay away. It was the last race of the year and it was too cold, or the champion had already been decided. They’ve reconfigured it 2 or 3 times to make it more exciting, and they still stay away. Making it a night race won’t change anything. I’ve thought for years, if Atlanta needs a second race, have it at Road Atlanta!

people just bow down to the ccp

the ccp is in frontstretch too looks like FACT-CHECK THAT