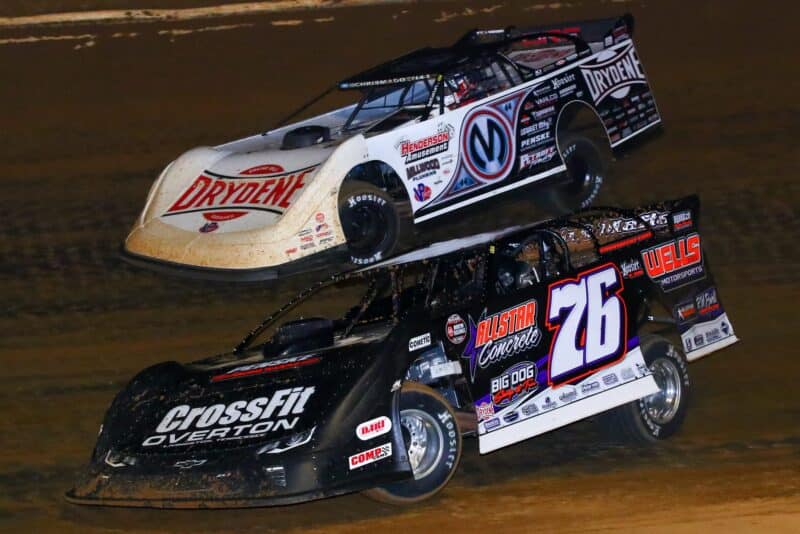 While Overton was among the class of the field Saturday night, leading the last 50-plus laps of the feature after early race trades for the lead with McCreadie and Mike Marlar, there’s no doubting a late-race caution for Kolby Vandenbergh with three laps to go benefitted the No. 76 driver. After a long stretch of racing saw Overton and McCreadie mirroring each other’s line on the bottom, Madden went to the high side inside of 10 laps to go and was running down Overton for the lead before the final yellow.

Though McCreadie came home third after leading early, the result was a major win for the defending titlist, as he retook the points lead on a night that saw series points leader Brandon Sheppard finish a distant 20th, his worst career finish in the Gopher 50.

Winning a $50,000 feature is a success in itself. But Overton also gets a shoutout here because his No. 76 team, which has made a good living in recent years dominating their home tracks in the South, have made a much deeper push into the midwest this summer, hitting unfamiliar venues and proving more than capable of handling them.

Chris Madden and Jonathan Davenport are the two titans of super late model racing in 2022, and they both showed why during the Gopher 50 weekend. Both drivers split the $5,000 preliminary features on Thursday and Friday, and both drivers opted into a track challenge Saturday night that saw them sacrifice front-row starting spots to start 11th and 12th instead, with the reward an extra $25,000 to score the race win.

Huge announcement and question @DeerCreekSpeed – 1st up, @TheFast49 & @chrismadden44. Will you give up the front row to start 11th and/or 12th for a $25k bonus if you win? The answer….YES!!! pic.twitter.com/HHWX08naTA

Ultimately, Madden came up one spot short, and as he stated in his post-race interview, his No. 44 team likely would have cashed in had Vanderbergh not brought out the caution flag late in the race. Madden, it should also be noted, ran this well all weekend despite having been out of his racecar the last two weeks fighting pneumonia.

It wasn’t a win, but McCreadie led laps during the feature and scored a top-five finish that returned his No. 39 team to the LOLMDS points lead.

Brandon Sheppard finished outside the top five for the first time ever in his four career Gopher 50 attempts, losing the points lead Saturday night. The No. 1S team found trouble on Friday as well, with Sheppard’s car suffering heavy damage after running into Kyle Bronson’s spinning car early in the preliminary feature.

Ashland, Ill.’s Kolby Vandenbergh made a lot of unwanted headlines Saturday night. Multiple laps down late in the going, Vandenbergh ultimately prevented Chris Madden from running his preferred line in the closing laps as he attempted to run down the race leader, then changed the complexion of the race for good when his left-front tire went flat with three to go.

CAUTION! Going to be a fantastic finish tonight from Deer Creek @lucasdirt pic.twitter.com/FXP4utoAsO

I couldn’t confirm whether he in fact changed lanes as Madden alleged in his post-race interview, but regardless, his No. 15 played a major role as a lapped car deciding the Gopher 50.

Scott Bloomquist was arguably the biggest name not to qualify for Saturday’s Gopher 50 feature, as the three-time LOLMDS champion never was a factor in his B-main feature on Saturday. Bloomquist is still riding a winless streak dating back to Sept. 2020.

Also absent this weekend was LOLMDS rookie contender Ashton Winger, whom MAVTV commentator James Essex reported was unable to run this weekend with his No. 89 race team down several crew members and racecars. Winger did serious damage to one of his machines in a DIRTcar Summer Nationals race at Red Hill Raceway at the end of June.

There was no more vexed place to be in Minnesota heading into Saturday than starting on the pole of the second B-main at Deer Creek. On Thursday night, Kyle Strickler dropped from first to seventh like a rock in the second B-main before getting tangled up in a yellow flag and missing the preliminary feature. Friday night, it was Chris Simpson who found trouble, getting walled by Tyler Erb on the first lap of the B-main and cutting down a tire shortly thereafter, missing the prelim field.

I get the feeling that the Gopher 50 name that this race goes by is a historical relic, given that Deer Creek Raceway is the third track to host it. Having said that, I’d rather see FOX’s Digger come to Flo Racing then have to sit through another freaking race where there’s a number in the race name that has nothing to do with the distance of the actual event. The 50-lap Historic 100, the 100 laps (over the course of a weekend) Illini 100, the Gopher 50 that’s 75 laps long … enough already. Call the race “the Gopher.” It’ll still sell t-shirts.

I have to give Gopher 50 title sponsor NAPA Auto Parts credit for its efforts to have most of the cars in the field carry its decals on their racecars this weekend, with cars carrying the decals eligible for $75 bonuses if they won their heat races. The little yellow NAPA stickers were very visible on racecars that don’t change from week to week. Whether they sell any auto parts remains to be seen, but in terms of being striking, mission success.

If late model racing ever goes full monster-truck and adopts style points, Ricky Thornton Jr. would have won Thursday night in a landslide based on his heat race performance. Missing a transfer by one spot seldom looks that exciting.

@MAVTV-Serious question here. After 2 nights of excellent @lucasdirt coverage with only @EssexLucasOil & @connerwade66 & no camera changes, why do we have all the unnecessary camera changes & the dirt late model racing uneducated @bobdillner tonight? The fans don’t like either.

For all those cameras, it was amusing to see MAVTV’s camera crews get obviously confused during Saturday’s driver intros, having to cut away from Brent Larson and rush down to the front row of the field to capture Madden and Davenport, who ended up starting 11th and 12th chasing bonus money.

This may come off as nitpicky, seeing as how the race format resulted in a closing-laps battle between three of the biggest names in late model racing. But the question has to be asked: Given his strength in the closing laps of races, would Tim McCreadie have taken the challenge of starting further back on if he didn’t have LOLMDS points to worry about? Seeing drivers able to go for broke for big money would be aided by having prelim nights count for series points rather than the main event.

Announcing crowds as the largest ever at a racetrack is really underwhelming without a figure attached to it. That’s a little too NASCAR. Besides, announcing a crowd of 5-10,000 people this weekend might have made NASCAR blush given how many seats there were at Atlanta this weekend.

Largest crowd in track history tonight for BOTH

-Wilmot Raceway with the @WorldofOutlaws Badger 40 &
-Deer Creek Speedway for the @LucasDirt Gopher 50.

Dirt racing is getting bigger than it's ever been. @AlwaysRaceDay pic.twitter.com/jn29DMiOoL

41 – super late models entered for the Gopher 50, the largest car count for the event in 13 years.

Where it Rated (on a scale of one to six cans with one a stinker and a six-pack an instant classic): We’ll give the Gopher 50 weekend four and a half Gopher It IPAs from Baxter Brewing Company. Deer Creek’s racing surface was stellar, and the track was able to secure bonuses on both Friday and Saturday to incentivize the leaders to start deep and put on a show. The late-race caution and having points considerations affect Saturday kept the show from a full fifth can.

Up Next: All eyes turn to the sprint car world this week, with the Historical Big One going off Thursday and the King’s Royal Saturday, both offering six-figure paydays for 410 sprint car racers at Eldora Speedway. Coverage can be found on DirtVision.