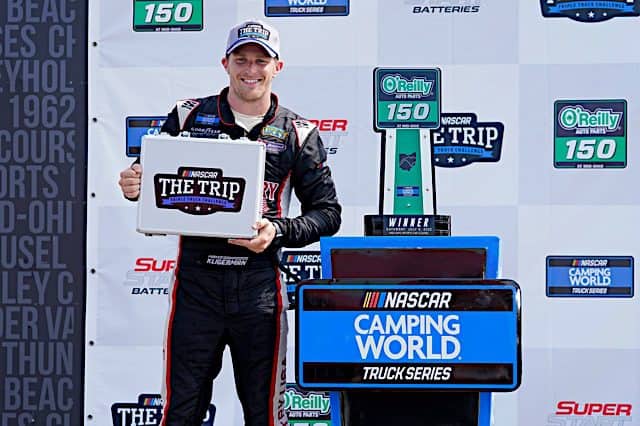 If Parker Kligerman is selling himself for a full-time NASCAR Camping World Truck Series ride, his marketing strategy hit the bank in multiple ways on Saturday

The 31-year-old Kligerman led 56 of the 67 laps on the 2.258-mile circuit en route to capturing the checkered flag at the O’Reilly Auto Parts 150 by a 0.119-second margin of victory. The win was his first Truck win since 2017 and the third of his career, as he held off strong runs from Zane Smith in the final few laps.

The No. 75 Henderson Motorsports driver also won the $50,000 bonus in the Triple Truck Challenge.

”It’s hard to put into words,” Kligerman told FOX Sports after his win. “I was really emotional on the cool-down lap because this whole team, it’s like a team of second chances. Two years ago, I thought my driving days were done. This team gave me a call, wanting to get back racing. It’s been a steady improvement throughout.

“It’s unbelievable when you put a talented group of humans together what they can achieve. We were doing this on an absolute fraction of what the two trucks we were up against. And we won at Mid-Ohio, a road course! Finally a road course win! I started in road courses, I came into NASCAR thinking, ‘Oh, that will be easy.’ It’s taken me more than a decade to get a win, but finally, we’re here.”

The Wreck That Could’ve Been

.@zanesmith77: "It was gonna be hard for me to wreck the guy who pushed me to my Daytona win." #NASCAR

Houston, We Have A Power Problem

Kligerman took the lead from pole-sitter Corey Heim on lap 4, just moments before rookie Lawless Alan briefly went off course. He wasn’t the only driver to have issues, though. Mason Filippi stalled off the racing surface to bring out a caution, however, he was able to continue.

Heim, who won the pole Friday with a top speed of 69.181 mph after rain impacted the day, reported a loss of power in his truck as well. It only got worse for Heim and with seven laps to go, his transmission let go, leaving him with a finish of 26th.

Following the Filippi incident, Matt DiBenedetto also got stung. But unlike Heim, he was able to get back rolling and finish the race. Although 19th is nothing to smile about, at least “DNF” was not listed by his name.

Tyler Young couldn’t avoid the bug either as he stalled coming out of pit road a few laps later to bring out another caution. This set up a one-lap showdown for stage points, with Kligerman starring as the Pied Piper, collecting the stage one victory.

While the racing was cleaner, the engine gods remained unfriendly. Reigning series champion Ben Rhodes got hit by the injury bug and went to pit road. But John Hunter Nemechek had bigger issues as smoke steamed out of the rear of his No. 4 Kyle Busch Motorsports Toyota. His team fixed the issue, but it forced the young phenom to go down 11 laps. He wound up 28th.

The Klig and Zane Show

The one thing that did stay consistent throughout the race, though was Kligerman and Smith racing each other as if they were in a dogfight for survival. Smith harassed Kligerman throughout the second stage and finally got his nose ahead to claim the win in stage two.

After pit stops, Kligerman regained the lead from Smith. But chaos came back for a sequel. Dylan Lupton suffered significant rear-end damage after hitting the tire barrier in turn 7.

Trackhouse Racing co-owner Justin Marks — a former Mid-Ohio winner in Xfinity Series competition — spun around with 21 laps to go, but that’s not what put the nail in the coffin.

Not how he wanted his day to end.@JustinMarksTH got out of his truck under his own power. pic.twitter.com/BkRkpCYlLs

This time, it was the brakes. Marks climbed out of his No. 41 Niece Motorsports machine wrecked into the turn 4 tire barrier with 18 laps remaining. He finished 31st in the 36-truck field.

The wrecks just kept on coming, though. Just after the race resumed, Austin Wayne Self spun around in traffic, collecting the rookie duo of Jack Wood and Blaine Perkins.

Let’s Try This Again, Shall We?

Good sentiment but the spins and the cautions only continued, as Chase Purdy got booted off course and went to pit road. Heim’s transmission then finally let go with six laps to go while running in second, bringing out a yellow.

But at long last, chaos took a breather. Kligerman sped by Smith and defended his position valiantly to win the race.

It was just an awful weekend for the rookies, but the one shining spot was Mallozi, who was the highest-finishing rookie in his Camping World Truck Series debut.

Welcome To The Playoffs + Points Report

Said Hocevar: “[I feel] pretty good. We’ve been fast on the dirt tracks even and the mile-and-a-halfs. I feel like the short tracks are our worst part, but we’ve been really fast. I didn’t have anything for [Kligerman or Zane], they were way better than me in practice. No matter how hard I [drove], they’d be two or three tenths better.

Zane Smith padded his lead over second-place Nemechek following his troubles. The 23-year-old holds a 58-point advantage over the defending regular season champion going into the final race of the regular season.

One Last Chance To Make The Playoffs

The trucks take on Pocono Raceway in the CRC Brakleen 150 for their final race of the regular season. It will air on July 23 at 12 p.m. ET on FOX Sports 1.

It sure would be nice to see him get a full-time ride somewhere.

The best case scenario would be for Henderson Racing to be able to leverage the win, into enough sponsorship, with the 50K, to be able to Keep Parker in the car, & go fulltime.

A great outing for the little team that could.