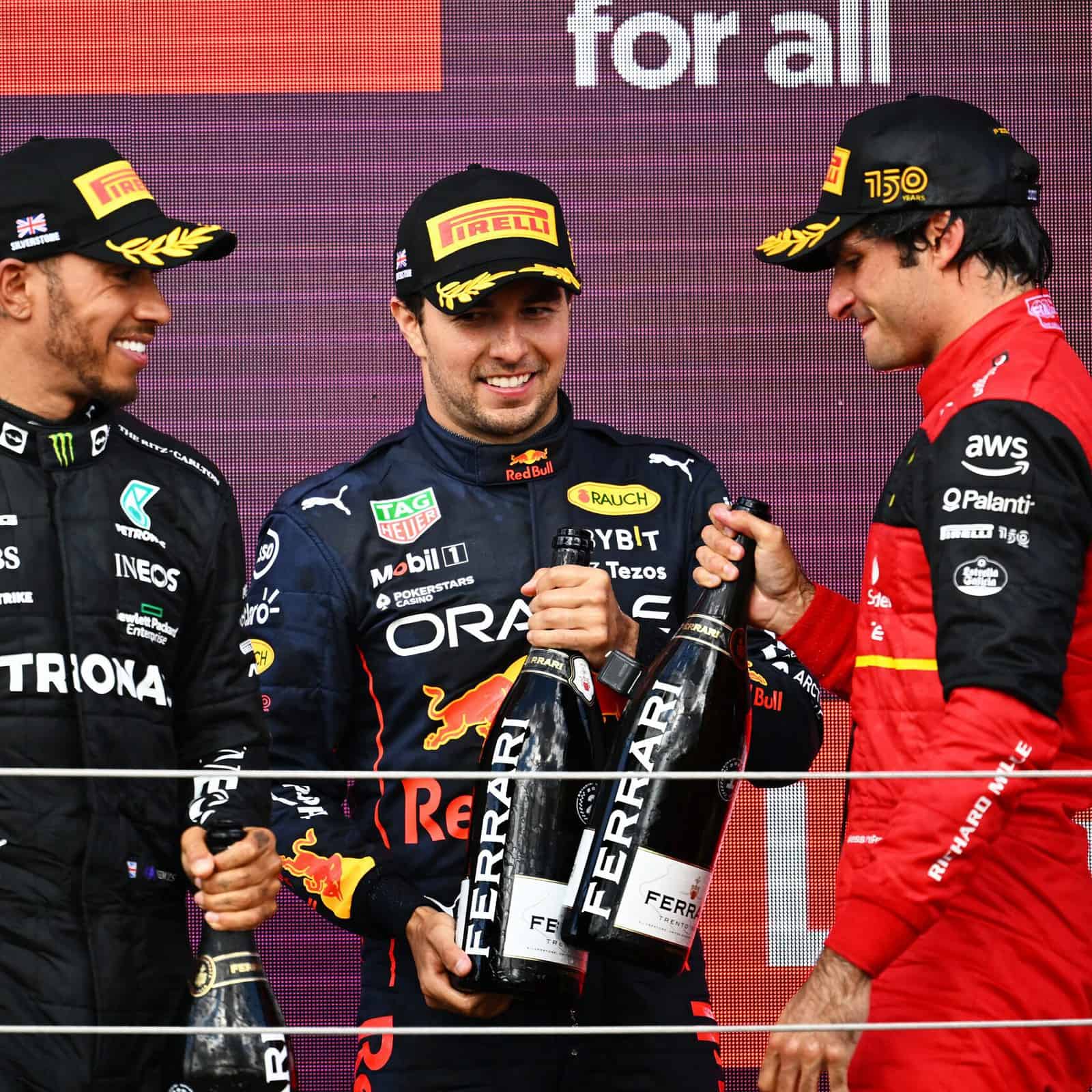 Carlos Sainz finally got his win. Driving for a Ferrari team that has shown glimpses of excellence in 2022, the Spanish driver has often looked out of the mix compared to teammate Charles Leclerc. Earning the pole for Sunday’s (July 3) British Grand Prix did not come as a shock as Sainz has shown speed all season. That he converted his position at the front for a win, his first-ever, came as validation of a career spent toiling.

After 150 races in Formula 1, Sainz finally stood atop the podium while also providing Ferrari a glimmer that it can still manage to take the fight to Red Bull in the constructor’s title. With Sainz taking first and Leclerc fourth, Red Bull is still managing a 63-point lead over the Prancing Horse (328–265) but with 13 races left, that lead is not one that is secure.

Sergio Perez might have something to say about the constructor’s title, however. After starting fourth, he suffered damage during the second standing start when Leclerc collided with him, sending him to the rear for a front wing change. He efficiently moved through the field, picking up positions with aplomb to grab second in the race.

Lewis Hamilton, starting fifth, moving up to third at the start, then re-starting fifth on the second start, still worked his way up to a third-place result. At one point, Hamilton looked like he could threaten for the win but a late safety car for Esteban Ocon’s stalled car removed that possibility.

The driver most upset by the safety car, Leclerc, finished fourth after leading before Ocon’s failure. Unable to pit for fresh tyres, Leclerc became an easy target for everyone behind him that enjoyed a stop for new soft compounds. His fall could have been worse as Fernando Alonso, hounded him the last couple laps, and ultimately finished fifth.

Lando Norris, looked prime for fifth but his late stop for tyres put him behind Alonso and he never could make up the spot. Max Verstappen, who at one point held the lead and looked to be on his way to yet another victory in 2022, suffered damage to his floor and could not muster the speed to race at the front. He wound up seventh but still holds the lead in the championship by 34 points over Perez (181–147).

Mick Schumacher scored the first points in his F1 career and nearly passed Verstappen in the final laps in doing so. His eighth-place result offers Haas some hope that the young driver is learning and will be able to start delivering positive races rather than destroyed racecars.

Sebastian Vettel put together a solid but quiet effort with a ninth-place finish. Kevin Magnussen earned the last points-paying position and gave Haas a buoyant result and keep them only seven points behind Alpha Tauri who sit seventh in the constructor’s table.

With Zhou Guanyu crashing out in spectacular fashion to begin the race, the tone was set for a peculiar British GP. George Russell and Alex Albon also found themselves out early during the melee at lights out as the race stopped on the first lap for a red flag. After rescue crews pried Zhou from his mangled Alfa Romeo and then fixed the safety barriers, the drivers readied themselves again for a standing start.

Yet, in the quirky rules that are F1, the drivers started in their original positions rather than the ones they had claimed during the first attempt. That meant that Verstappen handed first back to Sainz, while Hamilton dropped from third back to fifth, and so on.

The restart came off without incident and Sainz made good on the second attempt, holding off Verstappen. By lap 20, Verstappen’s Red Bull had come to him and looked to be in usual form and on his way to putting the 2022 season to bed.  Then he ran over some carbon fiber that damaged the floor to his car and the win became open for debate. Sainz looked like he might have the best opportunity, but then Leclerc showed better pace and put his claim on the trophy.

Instead, the lap 40 safety car coming after Ocon sputtered to a stop on the track with a fuel pump issue immensely changed the tenor of the race. Leclerc could not pit or he would have come out behind Hamilton and was thus stuck on used hard compound tyres, while everyone behind him grabbed fresh softs.

Sainz made quick work of his teammate, then blasted off into a lead of four seconds. Leclerc then fell into a battle with Perez and Hamilton that provided some of the most scintillating racing in F1 in quite a while.

Sainz found himself alone out front and cruised to the win as Perez made his way from fourth on the restart to second.  Hamilton gave both the British fans and the Mercedes organization reason to believe that things are looking up by taking third.

– Give the Halo credit – it might not be the prettiest aspect of modern F1 cars but it again proved its worth. Zhou sang its praise after he emerged unscathed from his wild, flipping, launch into the catch-fence.

Today was a reminder that F1 remains a high-speed, high-risk sport that is always right on the edge.

We are so thankful to the advances in safety that mean both Zhou Guanyu and Alex Albon are safe and well. pic.twitter.com/BJ8PPDG2av

There’s not much more that needs to be stated after seeing such an incident and then recognizing that Zhou stood giving interviews at the end of the race. Kudos to the Halo.

– Lewis Hamilton may have banked seven titles and over 100 wins but watching him thus far this season has been challenging, regardless of your position of support. Questions have surrounded his driving this year, wondering about his ability to adapt to the new car, whether he had anything left after last yearʻs losing battle against Verstappen for the title, and even if time had caught up with him (obviously ignoring that Fernando Alonso is five years his senior and still racing well).

To even see Hamilton leading laps during the race, almost came as a surprise. To think that he could battle for the win came as downright laughable. But for a moment, Mercedes turned back time and made the improvements needed to give Hamilton hope and give the race a jolt that it may have lost when Verstappen could no longer manage pace to tangle with the Ferraris. Finishing third, he said, “I was just grateful that I could be in the battles because I’ve not been in that fight for a while.”

– Some days just pass by in ignominious fashion. They may start right, bright sunshine and good vibes and then they just turn. If any team left Silverstone feeling that way, Alfa Romeo may have been the one. Aside from Zhouʻs race lasting just a few hundred yards, Valtteri bowed out before midway with a mechanical failure.

The Alfa team has looked strong at times, almost able to compete for fourth on the grid but days like this one are a difficult setback in maintaining consistency and positivity. They are currently holding on to sixth.

– At this point, the questions surrounding the marriage between McLaren and Daniel Ricciardo need to be scrutinized.  His performance looks troubling and he is rarely showing the form that earned him the nickname Honeybadger.

As Norris earned sixth, Ricciardo’s 13th looks terrible, especially as so many cars experienced DNFs and offered chances to move up.  Whatever is going on between driver and team is stuff that will remain behind closed doors but every statistical breakdown indicates that the relationship is troubled.

– Sergio Perez deserves every bit of credit for recovering from starting fourth, falling to 17th, and rebounding to finish second, but the driver of the day is obviously Carlos Sainz. Only one other driver waited longer than 150 races to secure his first win, and Sainz, like many who have talent but never found a car or opportunity that suited the, finally found his way. Starting with a lackluster Toro Rosso team, then joining a meddling Renault, before bouncing to a mediocre McLaren outfit, Sainz has found little to celebrate — even if he has finished sixth in the standings with McLaren.

Joining Ferrari looked to be the difference-maker, and before this victory, it had yet to be. While Ferrari may not be able to give Red Bull full push for the title, Sainz finally capitalized on everything that teams have seen in him all along.

– Carlos Sainz could not have been more ebullient, saying “What a day! Winning my first F1 GP and with Scuderia Ferrari in front of this amazing crowd, at one of my favorite tracks, Silverstone, is literally amazing.

“What a day! Winning my first F1 GP and with Scuderia Ferrari in front of this amazing crowd, at one of my favorite tracks, Silverstone, is literally amazing.”

– Sergio Perez acknowledged his own troubles while celebrating Sainz winning his first race, offering, “It is a good day for us and the team after such a messy weekend for us. Physically I wasn’t one hundred percent this week and after lap one I was last, so to come away with second place is a great result. I was so unlucky on the first lap making contact with Charles, I broke my front wing and had to drop to the back. So we had to fight for it and it feels good to have a result like this.

“I am also very happy for Carlos and to share his first win with him is a nice moment for him and his family. I enjoyed the racing today a lot, we were fighting hard and fair and it felt like my karting days.”

– Lewis Hamilton relished his ability to engage in a fight at the front, noting, “I feel like that’s Formula 1 at its best: the fact that we were able to follow and dice like that lap by lap is a testament to the direction I think that we’re now in.”

Note – Hamilton scored an additional point for setting the fastest lap of the race.